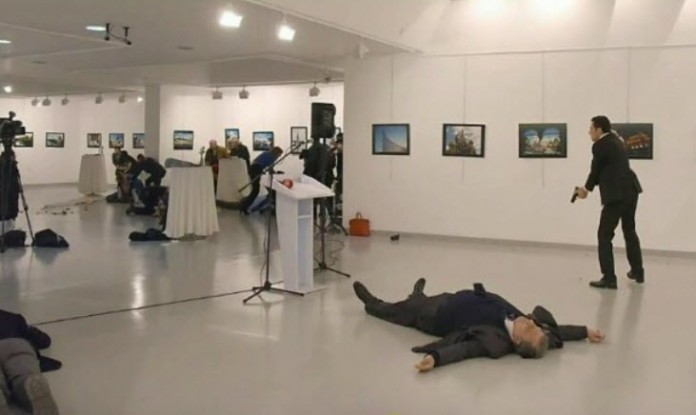 (INTELLIHUB) — A liberal writer for the NY Daily News wrote Tuesday that justice had been served after Russian Ambassador Andrei Karlov was assassinated at a news conference in Turkey.

Columnist Gersh Kuntzman, who in the past has claimed he suffered PTSD from simply firing an AR-15, revealed his support for outright terrorist assassinations in a column that has since received massive backlash but no backpedaling from the adamant columnist.

“As Vladimir Putin’s man in Turkey, Karlov was the public face of that murderous dictator’s war crimes around the globe and of oppression at home. Andrei Karlov is the human embodiment of policies that deployed bunker busters to kill babies, sent fighter planes on scorched earth bombing runs that destroyed a whole city, aided Syrian madman Bashar al-Assad in his campaign that has killed hundreds of thousands, and even ordered attacks on UN aid workers,” wrote Kuntzman.

“So I, for one, am shedding no tears for Andrei Karlov. Frankly, I’m surprised his murder didn’t come months ago,” he continued. “Justice has been served.”

Kuntzman makes no mention of the untold number of atrocities committed by the Syrian opposition that he has so happily supported in the past nor of the fact that many of the claims of war crimes by Russia have been disputed.

In this sort of new age leftist McCarthyism, anything and everything against Russia is apparently on the table, including murder.