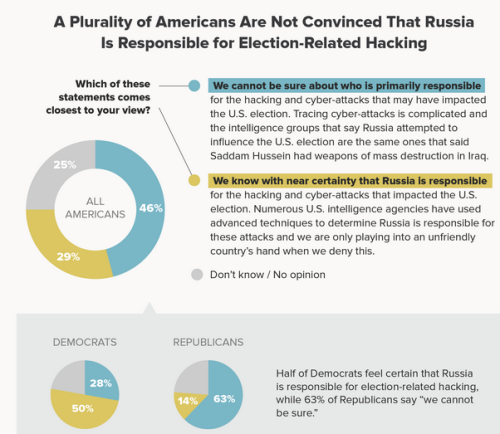 The “Russia intervened in 2016 election to favor Trump” conspiracy theory was the Democrats’ last-ditch effort to subvert the election by convincing the Electoral College to vote Hillary Clinton for the presidency.

Thankfully, instead of GOP electors going rogue by voting for Hillary, the faithless electors turned out to be Democrats who ditched Hillary. See “Trump officially voted President!”.

Now, a new Morning Consult/Politico poll finds that the American people don’t buy the “Russia as bogeyman” lie either, which is yet another indicator of the failure of the mainstream media’s propaganda.

According to the poll:

As usual, Democrats — being less informed and less intelligent — are more likely to believe in the “Russian hack” lie. (See “Republicans are better informed, more open-minded and tolerant than Democrats“)

As many as 50% of Democrats believe in the lie; in contrast, only 14% of Republicans are that stupid.

H/t FOTM’s Longknife 21 for the “Russians pooped in the hallway” pic!