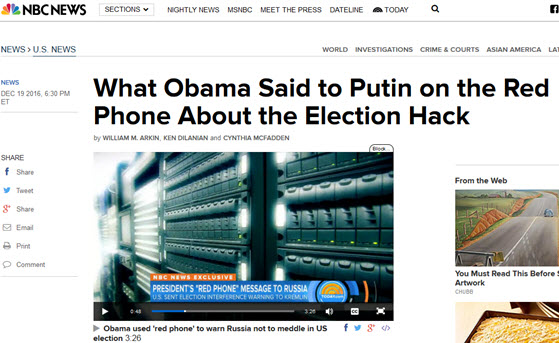 NBC is now reporting that President Obama used the “red phone” for the first time in his entire eight years in the White House to threaten Russian President Vladimir Putin about “messing” with our election.

Calling it a “rare and highly classified event” that occurred just before the vote, NBC claims they “just learned” Obama used the dreaded red phone to call the Kremlin and personally threaten Putin:

Mess with the vote and we will consider it an act of war.

Considering government propaganda is legal now, the question is, did this really happen?

Or are they just saying it happened to cover the obvious point: if the Obama Administration really thought there was a chance Russia was “hacking” our elections, why didn’t they do anything about it or bring it to the public’s attention before the vote?

It seems like another obvious CYA (that’s “cover your ass”) ploy to salve over the fact that all this talk of Russian election hacking wasn’t even a thing when the entire system was busy chanting “Hillary’s gonna win! Trump’s gonna lose!” over and over and over, as if simply repeating the mantra enough times would actually make it true. It’s only become an issue now that Hillary lost.

They’re also continuing to refer to this as an “election hack” by the way, even though that isn’t what happened. The election wasn’t hacked. The DNC was hacked. Podesta’s emails were stolen. Our election, though? Not hacked.

…Unless they consider “hacking” the elections the same as hacking their preferred candidate to expose how corrupt she is.