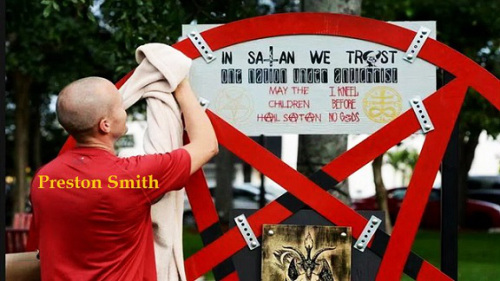 I’ve said it before: I firmly believe that when Obama was elected in 2008 to the White House, a portal to Hell was opened.

Certainly, in the 8 years of the Obama presidency, evil no longer hides in the shadows but has become public and in-your-face. See:

Already, with the election of Donald Trump and even before he’s inaugurated, evil has begun to recede back to the shadows where it belongs. See “MAGA: Beastialists in retreat after Trump win”.

A case in point: A middle school teacher in Boca Raton named Preston Smith has installed a large red satanic pentagram in a “free-expression zone” in Boca Raton’s Sanborn Square park, in the name of freedom of religion.

At the top of pentagram are the words:

The “T” of the word “Satan” is formed by an upside-down crucifix.

In the middle of the pentagram is a drawing of the Baphomet, a figure representative of the Devil.

In early December, the city of Boca Raton gave Smith permission to install a Satanic display at Sanborn Square downtown– the same park where other religious organizations install a nativity scene and menorah during the holiday season. Smith, a known activist for separating religion from government, argued that if the city allows one religious display on public property, it has to allow them all, even if they are offensive.

Kim Bremer, the president of Boca Raton Community Middle School’s parent teacher association, said she doesn’t want Smith to continue teaching at the school because “A teacher we entrust our children with should not be putting a sign like this anywhere,” but added she can’t speak on behalf of all parents.

Christians have peacefully protested against the pentagram.

Superintendent Dr. Robert Avossa refuses to fire Smith on the grounds that the first amendment protects Smith’s freedom of expression to express what he believes outside of the classroom, and there is no indication Smith has expressed his views while acting as a teacher. While Avossa understands parents’ concerns, “We certainly can’t micro-manage what an individual does outside of the schoolhouse. I am aware of the situation. This isn’t the first time this individual has participated in an activity like that.”

Smith said he does not “proselytize my own viewpoints in the classroom or disparage any child’s personal faith” and that he has no plans to step down as a Language Arts teacher at Boca Raton Community Middle School. He said that the words “May the Children Hail Satan” is “an artistic expression of defiance toward the Sanborn Square nativity scene, which performs an annual reenactment of predatory indoctrination in a public park targeting young children before they have critical thinking skills. Satan and God are clearly both fictional characters devoid of any verifiable peer-reviewed scientific evidence.” Blah, blah, blah.

The mayor of Boca Raton and the Interfaith Clergy Association have publicly denounced the pentagram.

The pentagram repeatedly is defaced — the words and the drawing covered with spray paint — which Smith calls a hate crime. In the latest incident, the pentagram was knocked down apparently by “vandals” in a truck, judging by tire tracks leading to and from the toppled display.

Preston Smith calls himself an “anti-theist” but gave an invocation to Satan at a Lake Worth City Commission meeting on December 2, 2014, hailing “the all-knowing wisdom of Satan”. (See “Florida city council summons Satan“)