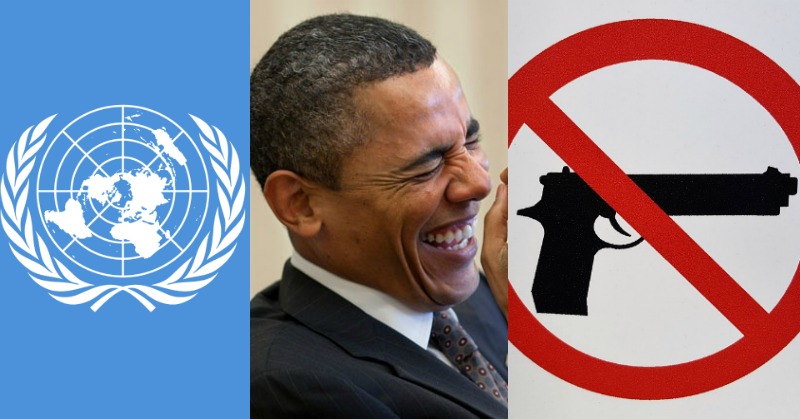 Last week, Barack Hussein Obama Soetoro Soebarkah sent the United Nations Arms Trade Treaty tot he US Senate to be ratified. It’s sure to be dead on arrival because of the Senate’s stand against the ATT, but he is just demonstrating his utter contempt for America, the Constitution and the Second Amendment.

Obama has been frustrated at every turn when it comes to his attacks on the Second Amendment, and when he has been beat back, he throws a temper tantrum like a little child.

While he said he would focus this last year on pushing more gun confiscation measures, he has been kept in check.

In a recent CNN interview, Obama admitted that his failure to enact gun control was the “one area where I feel that I’ve been most frustrated.” As he should be frustrated.

Gun Owners of America Communications Director Erich Pratt is calling on the Trump administration to “unsign” the ATT.

Pratt laments, “I’m sure that you’re already aware that the Arms Trade Treaty (ATT) would attack the Second Amendment in many ways. Most notably, it would REQUIRE America to set up a national gun registry. If New York City is any indicator, confiscation would soon follow.”

I agree with that assessment.

Secretary of State John “Lurch” Kerry lied to the American people about the ATT having a national gun registry, something that is blatantly unconstitutional.

The ATT went into effect on December 24, 2014 for those nations that ratified it. America was not a part of it, even though Kerry signed it, because the Senate kept its vow to uphold the Second Amendment.

One of the ironies of the Obama administration is that it has been one of the most brazen anti-gun administrations in our history and yet, Obama has been declared to be the nation’s top gun salesman!

Way to go America! You see through this Marxist’s agenda… at least when it comes to guns.