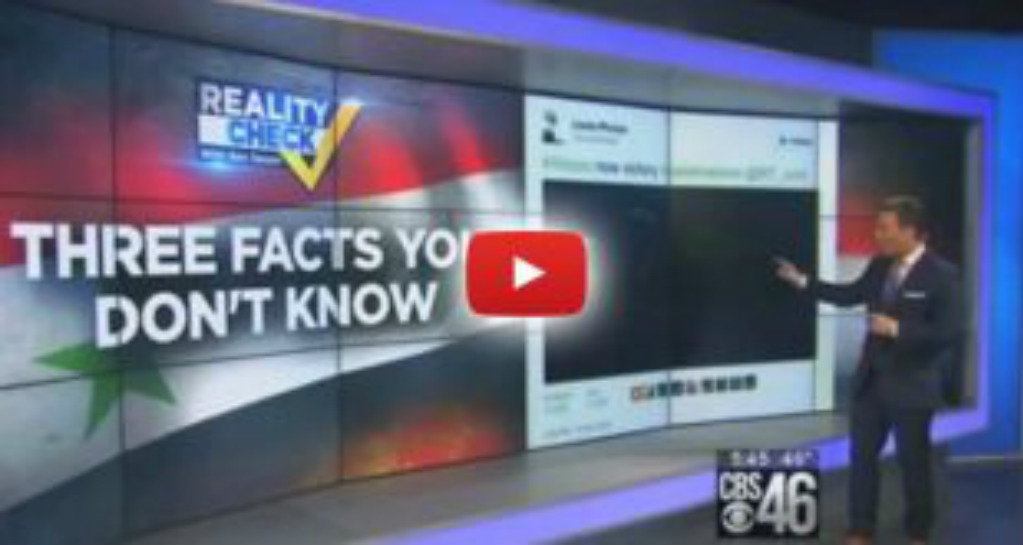 Aleppo, Syria — When it comes to disinformation, no one does a better job than corporate media — and one prime example of coverage constituting government propaganda is reporting on the situation in Aleppo. In fact, if you’re only following mainstream outlets, you don’t know what’s actually happening in the largest city in Syria — at all.

According to corporate media and the U.S. and other Western governments, Aleppo fell into violent chaos recently as the Syrian Arab Army — backed by the Russian military — moved to seize control of the eastern portion from Daesh (the Islamic State) and U.S.-backed terrorists commonly deemed “moderate rebels.”

In fact, the American propaganda machine went so far as to blindly parrot allegations Assad’s troops were going door-to-door killing people in an act described by activists as “genocide” of the Syrian people.

An opinion piece by the editorial board of the Los Angeles Times boldly declared in its title, “The violence at Aleppo is a stain on the world’s conscience. And it will likely go unpunished” — but the body of the article took an expectedly pro-Western stance, stating:

“The city had served as a main base for rebel forces since just after the war began, and it became Assad’s prime target after Russia entered the war on his behalf. Pro-Assad forces, including Iranian-backed militias, surrounded Aleppo in July, shut off supply and escape routes for the rebels (who were lumped together under a broad ‘terrorist’ label), and, with the help of Russian jets, have turned rebel-held sections of the city to rubble […]

“Assad clearly shoulders the primary blame for this, but Russia bears a load as well.”

That certainly sounds damning, exactly as propagandistic writing is designed, but the Times editorial board’s article was only a disingenuous ruse disguising the fact those rebels weren’t “lumped” as terrorists — they’re actually members of Jabhat Fateh al-Sham, formerly al-Nusra Front — the Syrian wing of al-Qaeda, or, as the U.S. calls them, moderate rebels.

Corporate media also proffered the stories from a number of people claiming to be activists on the ground, but either didn’t bother verifying — neglectfully or intentionally — whether or not those people were actually in Aleppo and whether or not their claims of mass killings had any validity.

Unsurprisingly, these ‘activists’ were hastily exposed as Syrian government opponents not located on the ground in the decimated city at all.

But the extent of disinformation from the mainstream media goes even further. As journalist Ben Swann, who has a penchant for breaking ranks with the establishment to bring light to the truth, reports three major facts you need to know about Aleppo in a Reality Check.

First — and a point plaguing the West’s coverage of the situation in war torn country — surrounds misleading information about the Free Syrian Army and various other rebel groups. Swann explains:

“Syria’s so-called Free Syrian Army rebels have been disbanded. They no longer even exist. The U.S. actually trained moderate rebels in Syria; but, according to the Pentagon, those ‘moderates’ gave all their U.S.-provided weapons to al-Qaeda in Syria known as al-Nusra Front. But in late 2015, the largest group battling Assad became the Islamic State.

“To be clear, the Syrian government is battling ISIS and al-Qaeda — not rebels. Those are proven facts and admitted by our own government, and yet for some reason, most media refuses to even mention the names ISIS or al-Qaeda when they’re talking about Aleppo; and, instead, only refer to these fighters as rebels.”

Because language so colors thinking and thus the formation of opinion — not to mention comprehension — of any issue, it’s imperative to emphasize that striking omission by the corporate press.

In 2012, as Swann explains, Aleppo was seized by al-Nusra and Free Syrian Army (FSA) rebels; so, in “September of this year, Assad and the Syrian Arab Army — the actual Syrian Army — with the help of the Russians began a military campaign to take back Eastern Aleppo, which is controlled by terror groups.”

Assad’s government sent in a convoy of buses to facilitate the evacuation of Syrian civilians, but Jabhat Fateh al-Sham (al-Nusra, a.k.a. al-Qaeda) — those armed with U.S. weapons — promptly torched the entire fleet.

“Why?” Swann asks. “Because al-Nusra and ISIS are reportedly trying to block the evacuation of civilians from eastern Aleppo as they use those civilians for cover.”

Second, as mentioned above, “there is not an attack on civilians being conducted by the Syrian government,” Swann says.

‘Rescuers’ have repeatedly claimed hospitals have been primary targets for bombing campaigns, and while that may be technically true, it leaves out fundamental details.

“It sounds horrific,” Swann notes of the hospital attacks, “but again, what virtually no national media is reporting, according to reports from those on the ground, like journalist Vanessa Beeley, there are only three hospitals in eastern Aleppo, and they are almost exclusively inhabited by al-Qaeda and ISIS fighters.”

While that information might take some people aback, it is Swann’s third fact about Aleppo that blows perhaps the most oft-touted propaganda item out of the water — the truth about the West’s beloved Syrian ‘rescue’ group, the White Helmets — “they’re not what they claim to be.”

“The White Helmets are an NGO [non-governmental organization] that claims it has no connection to any group in the Syrian fight. And they’re simply there to provide help to the injured and wounded civilians.

“They were nominated in 2016 for the Nobel Peace Prize — but here’s what you may not know: The White Helmets are actually receiving $100 million in funding from the United States, the U.K., Japan, Denmark, the Netherlands, and Germany.”

And as investigative journalist Rick Sterling explains in Consortium News, the putative humanitarian group didn’t just pop up out of nowhere:

“Not only do they only operate in rebel-controlled areas but they are a source of propaganda about the war, indeed their very existence is an element in the larger propaganda campaign to rally international support for a ‘regime change’ war in Syria. The ‘White Helmets’ brand was conceived and directed by a New York-based marketing company named ‘The Syria Campaign,’ which itself was ‘incubated’ by a larger politically oriented marketing company called Purpose […]

“Claims that the ‘White Helmets’ have saved 65,000 people also appear to be wildly exaggerated. The areas, served by the White Helmets and controlled by Al Qaeda’s Nusra Front and its rebel allies, have few civilians living in them. A medical doctor visiting east Aleppo two years ago described it as a ‘ghost town,’ yet Western media reports cite a highly inflated estimated population of 250,000.”

In the meticulously detailed article, Sterling further describes how the White Helmets — thanks to doting by the corporate press — surreptitiously morphed from the West’s humanitarian darlings into propagandic bullhorns for regime change.

“One of the reasons why the ‘White Helmets’ have been so successful in inserting their propaganda into Western media is that most of the rebel zones of Syria, especially east Aleppo, have been off limits to Western journalists and other outside observers for years. Two of the last Western reporters to venture into rebel territory, James Foley and Stephen [sic] Sotloff, were subsequently beheaded by the Islamic State.

“So, as the Syrian government and its allies finally try to expel Al Qaeda terrorists and their cohorts from east Aleppo, the White Helmets have become a major source for the Western news media which treats these ‘relief workers’ as credible providers of on-the-ground information.”

Although the White Helmets — lionized by the West and vilified by Syrians — certainly haven’t escaped salient criticism, major corporate media outlets, particularly in the United States, continue to rely on their accounts in reporting on a situation they’re acting directly to affect. For rather obvious reasons.

A subtler but pertinent point Swann employs to underpin his report concerned the factual account of how Syrian government forces were received by eastern Aleppo’s long-captive and traumatized civilians.

While U.S. media spewed untruths about slaughter and genocide, celebration — not violence — raged in the streets upon arrival of the Syrian Arab Army. Journalists present for the collective elation at the liberation, like Lizzie Phelan, reported, “All of downtown Aleppo tonight is filled with people celebrating.”

Amid a backdrop of audible continued shelling to secure the liberation of the city from militants by Syrian forces with Russian support, euphoric Syrians — seen in video posted to social media — literally danced in the streets and fired guns into the air.

This, of course, did not grace the headlines of government-mouthpiece mainstream media — which dutifully ignored the truth, and journalistic responsibility, to report anti-Syrian and anti-Russian drivel now expected by the U.S. political establishment.

“The bottom line here,” Swann concludes, “there is an entirely different story here that is being missed. There is no question that al-Qaeda and ISIS are the driving force against Assad in Syria. So, when media talks about those groups as a great threat to the world in every nation except for Syria — where they’re only referred to as ‘rebels’ — it becomes clear how dishonestly this story is being covered.”

When the corporate media presstitutes come out in full force, giving equal and virtually identical coverage to a news item, you can be veritably certain a government-approved reason exists for the lack of deviation and investigation — and Aleppo has been a paragon of U.S. propaganda.