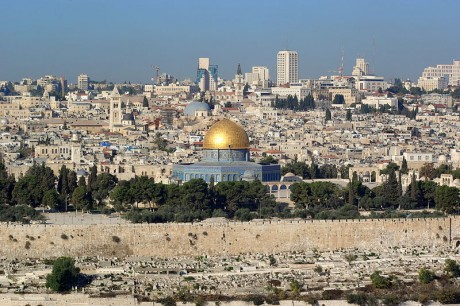 Barack Obama has just made the worst decision of his entire presidency.  On Friday, the UN Security Council adopted resolution 2334, and this never would have happened without the support and approval of Barack Obama.  Since the United States has veto power on the Security Council, no resolution can ever pass unless the United States allows it to pass.  For decades, it has been the policy of the U.S. government to veto all anti-Israel resolutions at the Security Council, and the Israeli government had been expecting that Barack Obama would not suddenly change that policy at the very end of his second term.  Most of the news headlines about resolution 2334 refer to “Israeli settlements”, but the reality of the matter is that this resolution is about much more than that.  The truth is that this resolution has established legally binding parameters for a “two-state solution” that Israel will never accept, and this includes giving every inch of East Jerusalem to the Palestinians.

If you have not read it yet, you can find the full text of resolution 2334 right here.  It is one of the most important documents of our time, so you need to take a few minutes to read it.

In the excerpt below, you will see that this resolution clearly states that East Jerusalem is in “Palestinian territory” and that the Security Council says that it will recognize no changes to the pre-1967 borders except “those agreed by the parties through negotiations”…

Reaffirms that the establishment by Israel of settlements in the Palestinian territory occupied since 1967, including East Jerusalem, has no legal validity and constitutes a flagrant violation under international law and a major obstacle to the achievement of the two-State solution and a just, lasting and comprehensive peace;

Reiterates its demand that Israel immediately and completely cease all settlement activities in the occupied Palestinian territory, including East Jerusalem, and that it fully respect all of its legal obligations in this regard;

Underlines that it will not recognize any changes to the 4 June 1967 lines, including with regard to Jerusalem, other than those agreed by the parties through negotiations;

As I have explained before, UN Security Council resolutions are considered to be legally binding on the parties.  Now that the Palestinians have been granted full legal ownership over East Jerusalem, does anyone actually believe that they will ever willingly relinquish that?

Today, more than half a million Israelis live in East Jerusalem and the 137 settlements that are scattered throughout the West Bank.

Where are they all supposed to go?

This UN Security Council resolution never should have happened.  President-elect Donald Trump made it abundantly clear that he would have vetoed this resolution, but instead of deferring to the next administration Barack Obama decided to viciously stab Israel in the back.  This is the greatest betrayal of Israel in American history, and according to Israeli Prime Minister Benjamin Netanyahu the Obama administration has been plotting this for quite a while…

“From the information that we have, we have no doubt that the Obama administration initiated it, stood behind it, coordinated on the wording and demanded that it be passed,” Netanyahu said in a statement. “This is, of course, in complete contradiction of the traditional American policy that was committed to not trying to dictate terms for a permanent agreement, like any issue related to them in the Security Council, and, of course, the explicit commitment of President Obama himself, in 2011, to refrain from such steps.”

During an interview with with CNN on Sunday, an official spokesperson for Netanyahu said essentially the same thing…

Netanyahu spokesman David Keyes told CNN on Sunday, “We have iron-clad information, frankly, that the Obama administration really helped push this resolution and helped craft it, from sources internationally and sources in the Arab world.”

Unfortunately, Obama’s actions are going to have very serious implications for all of us.

“And it will be on that day that I will set Jerusalem as a weighty stone to all the peoples. All who carry it will surely gash themselves, and all the nations of the land will be gathered against it.”

By defiantly attempting to divide the land of Israel and the city of Jerusalem during the waning days of his presidency, Barack Obama has cursed America.

You may not believe in blessings and curses, but the Word of God says that those that curse Israel will be cursed, and without a doubt we will most assuredly be cursed as a result of what Barack Obama has done.

And of course the entire Middle East is going to suffer as well.  Instead of bringing peace, this resolution just sets the stage for more conflict.  According to the Times of Israel, the Netanyahu government is already promising not to adhere to the terms of the resolution…

“Israel categorically rejects the despicable anti-Israeli resolution at the UN, and will not adhere to it,” the Prime Minister’s Office said in a seething statement after the council voted in favor of the motion 14-0.

Knowing all of this, put yourself into the shoes of the Palestinians for a moment.

The UN Security Council has given them legal rights to a nation with borders based on the pre-1967 lines.  They have been given every inch of East Jerusalem, and every Israeli settlement in East Jerusalem and the West Bank has officially been declared illegal.

If Israel refuses to budge, the Palestinians could very easily come to the conclusion that they have exhausted all legal channels for resolving the conflict and that the only way they are going to get what legally belongs to them is to take it by force.

A great war is coming to the Middle East, and it will be a life or death struggle between the Israelis and the Palestinians.

Nothing else that Barack Obama has done during his entire time in the White House even comes close to this.  He has greatly cursed America, he has set the stage for the bloodiest war the Middle East has ever seen, and he has defiantly shaken his fist at the one true God that created all things.

May God have mercy on us all.