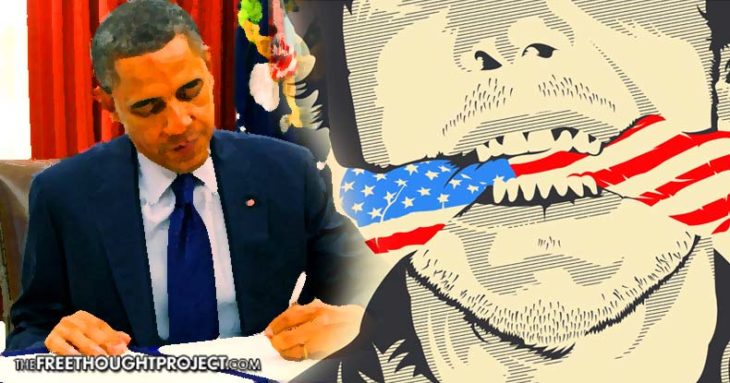 Although the NDAA’s true purpose is to fund the military, notorious provisions — particularly of the variety which erase yet more freedoms — are often added to the overall legislation. In this case, the propaganda and disinformation provisions mentioned above had been attempted in a stand-alone bill which remains stalled in Congress — partly due to scathing criticism and unpopularity from wary politicians.

And that seems justifiable, given legitimate parallels drawn to 1950s McCarthyism and the Red Scare.

According to the text of the $619 billion bill, the Secretaries of State and Defense and other pertinent officials will be tasked with creating an innocuous-sounding “Global Engagement Center.”

“The purpose of the Center,” states the text, “shall be to lead, synchronize, and coordinate efforts of the Federal Government to recognize, understand, expose, and counter foreign state and non-state propaganda and disinformation efforts aimed at undermining United States national security interests.”

In actuality, however, countering propaganda amounts to silencing dissenting opinion — particularly in the press — of anything deemed shining a favorable light on one of the many countries the U.S. considers a foe.

Such as Russia — which has been the target of choice for blame concerning the election of Donald Trump.

But it could also be a vehicle to initiate censorship of independent and alternative media for reporting on corruption — rife in the Democrat establishment and corporate press — as exposed by documents published by Wikileaks.

It also means creating and furthering propaganda of the American government — because, theoretically, you can’t combat foreign agitprop without filling the void with something convincing and favorable to governmental agendas.

As text of the new law explains, the center will “support the development and dissemination of fact-based narratives and analysis to counter propaganda and disinformation directed at the United States and United States allies and partner nations.”

Many of the Global Engagement Center’s duties concern targeting disinformation and propaganda being disseminated in other nations; however, it subtly suggests the effort would seek to prevent such content from reaching the United States — thus, domestic actions are, by no means, ruled out.

Indeed, as the law states:

Seeming at least somewhat innoxious, had the law been passed in a vacuum, the current hysteria over putative Russian interference during the election cycle presents alarming potential implications for the future of free speech and unobstructed access to information.

A subsequently partially backtracked report by the Washington Post, “Russian propaganda effort helped spread ‘fake news’ during election, experts say,” originally published on November 24, boldly declared The Russians had been behind disinformation during the election cycle, and had facilitated the election of Donald Trump to suit a shady but noticeably unspecified political agenda.

First to obtain an ostensibly damning list of news organizations affiliated with The Russians, the Post failed, negligently or intentionally, to investigate the nascent organization which provided said list, or to even contact a single outlet named — yet reported as if the information were so damning as to be indisputable truth.

In fact, the supposed experts cited by the once-illustrious outlet inhabited a single, newly created website, PropOrNot, whose owners sophomorically responded to outrage — giving the Post a black eye in the process — tweeting,

The website encourages reporters and anyone with questions to reach out via Twitter or email, but says, “If you’re a Russian troll, though, don’t bother. We’ll just ban you.”

Although the Post, itself, did not publish or link to the unsourced and unverified index of organizations — incidentally, comprising 200 independent, alternative outlets, and those who’d dared endorse presidential candidates other than Hillary Clinton — the damage exponentially worsened as countless corporate presstitutes parroted the non-information at a rapid clip.

After its half-hearted retraction of that misstep, the Post further embarrassed itself with a report titled, “Secret CIA assessment says Russia was trying to help Trump win White House” — but stunningly provided even less evidence — and again failed due diligence to back this assertion, other than the putative claims of unnamed officials.

Worse, its own article disputed the audaciousness of the headline — the Post admitted no report would be forthcoming from a consensus of all 17 U.S. Intelligence agencies, since “minor disagreements” among officials persist.

When the public had a difficult time swallowing such allegations, the White House stepped in and, rather flippantly, proclaimed Russian President Vladimir Putin played a direct role in hacking the U.S. presidential election — again, despite any evidence the ‘election’ had been ‘hacked.’

Couple this renewed Red Scare with what, in essence, marked the legalization of one of the most nefarious covert domestic government operations in U.S. history — Operation Mockingbird — and any iterations this program won’t severely cripple legitimate but dissenting American media ring hollow.

Notably, though the Obama administration cited pernicious pro-Russian propaganda and the proliferation of false reports for causing the election of Trump, no unassailable evidence has yet been proffered proving this theory true — nor has any indication “fake news” so much as changed a single vote.

Yet, these propaganda-slaying provisions — now the law in the newly-signed NDAA — put this shirked blame for a lost election strawman directly in the crosshairs, as if The Russians meddled was irrefutably evident.

What we can now expect in the coming year is quite up in the air; but, for purveyors of information critical of the political establishment, the NDAA portends censorship beyond the current, heightened, and unusually judicious level we’re currently experiencing.

For everyone concerned about the ability to speak freely — and those who choose to challenge themselves with information outside their personal echo chamber — the legislation constitutes a potentially abhorrent overreach into previously sacred territory.

In fact, for all intents and purposes, the NDAA’s single phrase, “dissemination of fact-based narratives,” summons a near specter to newspeak, the propagandic and revisionist language created by the Ingsoc government’s Ministry of Truth in George Orwell’s now eerily portentous 1984.

Innumerable tongue-in-cheek references to that dystopian classic have been made in recent times, but the new law seemingly cements the parallels — naming the modern iteration of the Ministry of Truth an even creepier, Global Engagement Center.

Given the renewed Cold War atmosphere, perhaps politicians would’ve been better served by discarding pretense and inserting into the legislation’s text Orwell’s famous line, “Oceania was at war with Eurasia; therefore Oceania had always been at war with Eurasia.”

None of this, it must be noted, is intended in any way to instill fear; however, history — specifically the era of Senator Joseph McCarthy and his ill-reputed witch hunts against dissenting voices — teaches that the imperative for caution greatly precludes the polite delicacies of not treading far enough.

And it is precisely the foible human penchant for failing to grasp historical lessons that makes a degree of alarm necessary in yet another attempt not to repeat our most ill-fated mistakes.