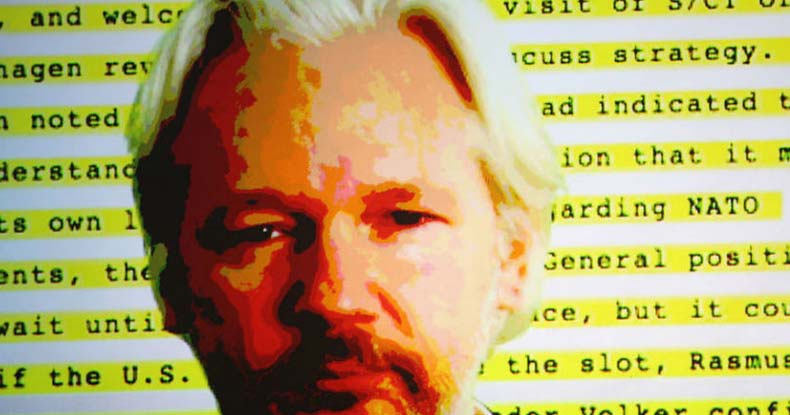 That Russian hackers somehow compromised the U.S. presidential elections to install Donald Trump so fits the political establishment’s preferred narrative, any information to the contrary — even from the mouths of people with direct knowledge — has been brutally criticized, and even labeled “fake.”

While certain unnamed officials in the CIA — and the once-illustrious Washington Post and New York Times — might implore Americans to believe shady Russian government actors hacked into the email systems of the Democratic National Committee and Hillary Clinton campaign chair John Podesta, they have yet to offer a shred of evidence to back this claim.

On December 9, the Post published a flagrantly propagandic ‘report’ — so devoid of verifiable information, it’s a wonder any editors approved its publication — titled “Secret CIA assessment says Russia was trying to help Trump win White House,” which claimed CIA and U.S. Intelligence officials had reached a consensus about Russians hacking the election.

That story, quickly parroted by the Times, fell apart under cursory scrutiny, particularly as its otherwise vehement tone contradicted itself, stating:

“The CIA presentation to senators about Russia’s intentions fell short of a formal U.S. assessment produced by all 17 intelligence agencies. A senior U.S. official said there were minor disagreements among intelligence officials about the agency’s assessment, in part because some questions remain unanswered.”

Wikileaks founder Julian Assange has repeatedly denounced vapid claims the Russians hacked Democrat systems and forked over the documents for publication. Breaking with the publishing outlet’s strict standards of not divulging any identifying details about sources, Assange says the emails were not hacked by outside agents — rather an inside source with access leaked the information to Wikileaks.

Nevertheless, corporate presstitutes continue hyperbolically echoing the establishment’s Red Scare propaganda, ignoring entirely the person most familiar with the leaks — the person who founded and runs Wikileaks — has categorically denied the source has any connection to Russia.

Assange’s claims are backed by close associate and former British Ambassador to Uzbekistan Craig Murray, who knows the source and told the Daily Mail, “Neither of [the leaks] came from the Russians. The source had legal access to the information. The documents came from inside leaks, not hacks.”

Murray told the Guardian the CIA’s claims are pure “bullshit,” and, flatly, “They are absolutely making it up.”

In a blog post excoriating the mainstream press and neoliberal Democrats for pushing anti-Russia propaganda beyond the limits of any believability, Murray wrote,

“A little simple logic demolishes the CIA’s claims. The CIA claim they ‘know the individuals’ involved. Yet under Obama the USA has been absolutely ruthless in its persecution of whistleblowers, and its pursuit of foreign hackers through extradition. We are supposed to believe that in the most vital instance imaginable, an attempt by a foreign power to destabilise a US election, even though the CIA knows who the individuals are, nobody is going to be arrested or extradited, or (if in Russia) made subject to yet more banking and other restrictions against Russian individuals? Plainly it stinks. The anonymous source claims of ‘We know who it was, it was the Russians’ are beneath contempt […]

“The continued ability of the mainstream media to claim the leaks lost Clinton the election because of ‘Russia’, while still never acknowledging the truths the leaks reveal, is Kafkaesque.”

But if the media and public aren’t satisfied with Murray’s first-hand knowledge, Assange’s own denials expose the disingenuity of this anti-Russia scaremongering.

On December 15, the Wikileaks founder emerged in an interview with Sean Hannity — just as the Democrats ratcheted up McCarthyite tactics — telling the host definitively,

“Our source is not the Russian government.”

“In other words, let me be clear,” Hannity replied. “Russia did not give you the Podesta documents, or anything from the DNC?”

This only reiterated what he’d told Australian journalist John Pilger in a 25-minute interview special by Dartmouth Films:

“The Clinton camp has been able to project a neo-McCarthyist hysteria that Russia is responsible for everything. Hillary Clinton has stated multiple times, falsely, that 17 US intelligence agencies had assessed that Russia was the source of our publications. That’s false – we can say that the Russian government is not the source.”

In September, Wikileaks tweeted a response to a New York Times hit piece titled, “How Russia Often Benefits When Julian Assange Reveals the West’s Secrets” — which has, incidentally, since been removed from the NYT website — blasting the once-illustrious outlet’s threadbare accusation:

“The only hard news in the article is that ‘American officials say Mr. Assange and WikiLeaks probably have no direct ties to Russian intelligence services.’”

In fact, according to the Times article, the finding of no direct ties is presented as an“emerging consensus” — suggesting much of the Intelligence Community agrees there isn’t a Russian connection.

Wikileaks duly noted it “has published more than 650,000 documents about Russia & president Putin, most of which is critical” — a fact utterly ignored, if not purposely suppressed, by corporate media and Clintonites hell bent on forcing Americans to believe the false Russian hacking allegation.

Even before then, in August, the publishing outlet tweeted, “US intelligence: No connection between Russians and WikiLeaks,” citing an article by Glenn Greenwald for The Intercept. In the August 8 piece, Greenwald noted,

“When WikiLeaks published thousands of DNC emails shortly before the Democratic Convention, which ultimately forced the resignation of four top officials, it was instantly asserted that it was The Russians who gave them those emails (even though The Washington Post cited an intelligence official as saying that ‘the intelligence community . . . has not reached a conclusion about who passed the emails to WikiLeaks’ and ‘We have not drawn any evidentiary connection to any Russian intelligence service and WikiLeaks — none’).”

US intelligence: No connection between Russians and WikiLeaks https://t.co/mnwGWJ1uZ4 pic.twitter.com/iTtwh3u7od

Insistence the DNC and Podesta documents found their way to Wikileaks courtesy of The Russians has no foundation of truth, so it’s necessary to emphasize what’s really going on in that accusation — and why it’s being heralded so broadly, despite the evidentiary deficit.

When the pieces do not align — when something is so illogical it defies explanation — it’s imperative to ask, cui bono?

Who has what to gain from neo-McCarthyite propaganda emptily smearing Wikileaks and Julian Assange?

In actuality, it serves a dual purpose. An accusatory tone implied against Russia and President Vladimir Putin furthers the U.S.’ foreign policy goals, which, at present, include deposing the government of Syrian President Bashar al-Assad — backed diplomatically and militarily by Russia. Screaming, ‘The Russians did it!’ also handily distracts from the indisputably damning content the documents revealed about Hillary Clinton, her intricate network of loyalists, the Democratic Party, collusion with mainstream presstitutes, and — frankly — their blatant attempt to rig the 2016 presidential election.

That attempt, of course, laughably backfired because a diligent, honest independent and alternative media reported on Wikileaks stunning disclosures — not because The Russians were hard at work pulling strings, writing checks, and hacking the system behind the scenes.

Americans fed up and sick of corruption and an established system benefiting just the corporate and political elite paid attention — and voted the only way their consciences would allow — even though Donald Trump certainly comes with his own share of controversy.

Wikileaks is telling you The Russians didn’t hack anything — but someone equally fed up with that corruption handed over the evidence of it to nail the coffin in that chapter of U.S. history.