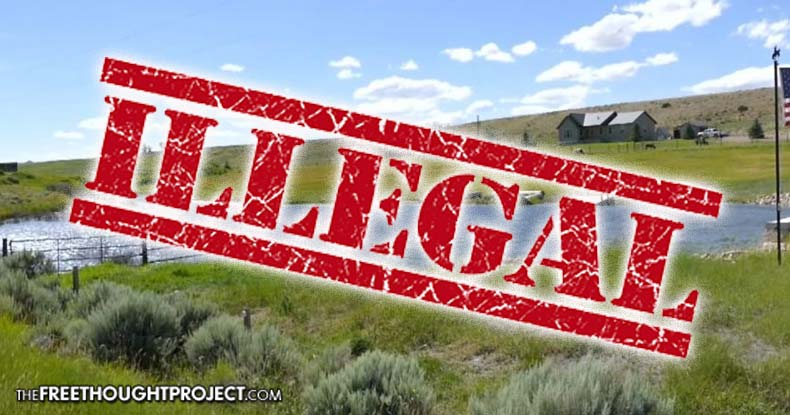 Butte Falls, OR — An Oregon couple has been told they must destroy a 2-acre pond on their land — the property’s most attractive feature — because the government said so.

Although Jon and Sabrina Carey purchased the 10-acre property near Butte Falls two and a half years ago, the pond has been in place for 40 years — but that fact doesn’t matter to the Jackson County Watermaster’s Office.

“I basically bought a lemon,” said Jon, who became teary-eyed at the edge of the partially ice-covered body of water being targeted by government, in an interview with the Mail Tribune. “That’s how they explained it to me.”

But the couple desperately wants to keep the stunning longstanding feature in tact, so, as the Mail Tribune reports, the Careys have “pleaded with the Medford Water Commission to adopt the pond and treat it as a municipal water source, something Jackson County Watermaster Larry Menteer has opposed because of the precedent it would set.

“The Water Commission has rights to the watershed around the Careys’ property, where dozens, if not hundreds, of ponds are located, as well as Medford’s primary source of water, Big Butte Springs.”

And the Careys aren’t the only people in the watershed who’ve had difficulties with, well, ‘the government’s’ water.

Harrington masterfully crafted several ponds on his property — even building docks for one, and stocking it with largemouth bass — but his insistence the water would assist in fire control and prevention didn’t satisfy the government, since a “1925 state law dictates that the water belongs to the Medford Water Commission.”

“The bigger story here is that rainwater collection is indeed kosher in Oregon, provided that you’re capturing it from an artificial, impervious surface such as a rooftop with the assistance of rainwater barrels. But an extensive reservoir set-up complete with 10- and 20-foot-tall dams is verboten without the proper, state-issued water-right permits — after all, Oregon law dictates that water is a publicly owned resource — and Harrington did not possess said permits.”

Harrington and the Oregon Water Resources Department waged an extended battle over the ponds, and at one point, it was ruled he would be allowed to keep everything in place — but that decision was backtracked in less than one year.

Ultimately, “Rain Man,” as he came to be called, found himself charged with nine misdemeanors, spent three months behind bars, and had to shell out $1,500 in fines — and was ordered to destroy the dams and drain all the ponds.

Harrington’s case might have been infinitely more complex than the Careys’ — considering the large volume of water and infrastructure he’d put in place — but they share the same theme of overbearing government and arguably wholly unnecessary law versus the right of people to do as they please with their property.

“When you’re honest, they take everything away from you,” said Sabrina Carey, who inspected country records — which plainly showed the pond — before they purchased the property.

Going by the book might have been the ‘fatal’ error for the couple, however, since the county didn’t take issue with the pond until Jon sought to grow legal medical cannabis on the land and had to prove there was a viable source of water for the grow operation.

According to the Watermaster’s Office, the previous owners had not received a permit for the pond, so the Careys were now in violation of Oregon regulations — and they would have to shoulder the cost of draining the water.

In an effort to prove the pond is legitimate and persuade county government to allow it to remain on the property, the couple stopped using it — even though the well on their land had run dry — and began shipping in the water for daily living and gardening from nearly Butte Falls.

They’ve also had no choice but to hire attorney Sarah Liljefelt, who filed a request with Jackson County to provide a permit for them to store water, stating, “The reservoir on Ms. Carey’s property, though small, is one of the largest in the area.”

By all appearances, the large pool of water does more good for the environment than if it weren’t there at all — during their fight with the State, the Careys even suggested it be used for fire control and prevention, like Harrington did, as the pond is easily accessible by fire crews.

But the county has displayed only nonsensical obstinance on the issue.

“This pond seems to be doing way more public good than not being here. Why, now, is it so important to be removed?” Jon lamented.

Indeed, the 40-year-old man doesn’t even profit from the medical cannabis grown on the land he and his wife own, as he literally gives the crop — free of charge — to friends.

“I don’t make anything out of this,” he said.

Members of the Water Commission disagree on whether this is an issue worth fighting over at all, but as the Mail Tribune reports,

“Water Commission staff found several problems with the Careys’ request, including setting a precedent that could prompt similar requests and weaken state statutes while not meeting the definition of ‘municipal water source.’ The staff found it would be very difficult to access the water stored in the pond for municipal reasons, and further monitoring and following up on compliance issues would be difficult and costly for the commission.”

However, the commission also failed to state why this should be a matter for the government in the first place — why punitive bureaucracy needs to meddle with a pond on private property, serving as a valuable ecosystem, that poses no threat to anyone or anything, and isn’t even an eyesore, must be destroyed.

Besides a trailer home and dilapidated house, the pond is the only thing of value on their acreage, and, obviously, as Sabrina said, “We didn’t buy it for the double-wide.”

She told the Mail Tribune the pond should have been registered with the Oregon Water Resources Department nine years ago, but the owners at that time did not reside on the property and didn’t do so.

They have even offered to reduce the pond’s size, allow officials to inspect it when necessary, and have provided a draft easement to the commission in hopes of allowing the prized water feature to remain intact — thus far to no avail.

“We’re just trying to do it by the rules,” Sabrina explained. “I’m trying to cooperate.”

In 2012, Gary Harrington had already been through years of conflict with government officials over illicit water — and provided CNSNews with stronger sentiment on the topic:

“When something is wrong, you just, as an American citizen, you have to put your foot down and say, ‘This is wrong; you just can’t take away anymore of my rights and from here on in, I’m going to fight it.”

That government feels entitled to not only something located on private property, but that people should not be allowed to collect rain, is everything wrong with excessive government — and the overregulation of daily life.