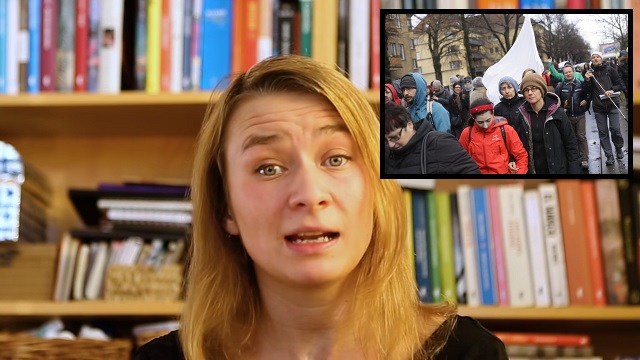 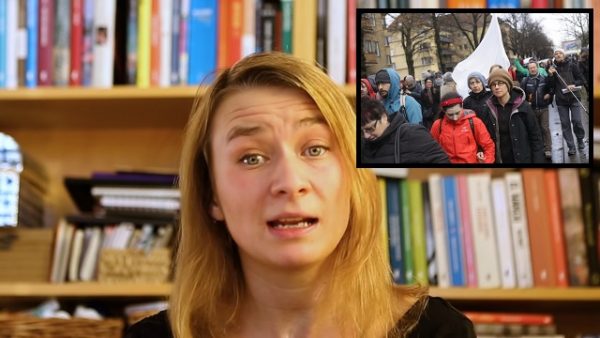 An idiot feminist deluded by the lying media’s fake news is leading a 3,000 kilometer march to Aleppo in order to “raise awareness that in other parts of the world people are struggling.”

Hundreds of activists set off from Berlin on Monday on a three and a half month march to Aleppo to raise awareness about the humanitarian crisis in Syria.

Before setting off, Caspar explained why he was taking part: “It’s Christmas and it is nice to spend time with family, but we also have to raise awareness that in other parts of the world people are struggling and that we could do something to make their lives better.”

…Known as the ‘Civil March for Aleppo’, organisers say the group plans to pass through the Czech Republic, Austria, Slovenia, Croatia, Serbia, the Former Yugoslav Republic of Macedonia, Greece and Turkey.

The team of international organisers, headed by journalist and travel blogger Anna Alboth, have warned participants that they should be prepared to sleep in the ‘wild’ as they rely on public donations for food and shelter along the route.

Organisers say the marchers are not expected to walk the whole way, however, more are expected to join as the group continues on its journey to Syria.

Alboth was apparently motivated by fake news reports in the Western media claiming Assad and Putin are massacring children for fun.

Alboth’s husband, two young children aged five and seven, and her mother are taking part on the trip for the first week. Alboth apparently believes ISIS terrorists and US backed rebel groups who regularly behead children wouldn’t bomb their march because it would make them look bad.

As BBC News reported in a glowing puff piece:

“People like me think that if five or ten thousand people are marching and getting everyone’s attention, then it’s impossible that they would bomb you,” she said.

“I think if it really happened and they bombed a peaceful march, then this world is worth nothing.”

I guess no one told this woman the story of Pippa Bacca, a similarly deluded feminist who set off on a “trip for peace” to show the goodness of all people by walking through the Middle East only to be raped and murdered almost immediately by a cab driver in Turkey. Alboth’s husband ought to be ashamed of himself for letting the mother of his children risk her life and her children’s well-being as part of a virtue-signalling publicity stunt.

Lying media outlets from CNN to the BBC are praising this woman’s suicidal stunt.

"We had enough of just watching" — Anna Alboth says of the 2,000-mile-march she has planned from Berlin to Aleppo. https://t.co/IOJdou7rAW

In order to score points against Putin and Assad, the kingpins of fake news are encouraging mothers to sacrifice their lives on the battlefields of Syria under the delusional idea “it’s impossible” that ISIS will kill them.