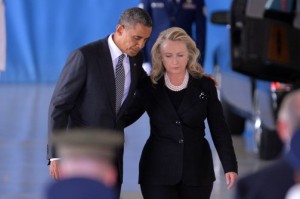 A lot of us figured this was coming, but now the mainstream media is predicting the obvious in print.

In a piece by contributor David Weisberg over at The Hill, he declares that Obama will make sure to pardon Hillary Clinton “for any violations of federal law she might have committed while she was secretary of state.”

We should first note that the Obama administration’s decision not to prosecute Mrs. Clinton would not bind the Trump administration. Until relevant statutes of limitations have expired, she could still be prosecuted by the new administration. It is possible in my opinion for Clinton to be prosecuted for either her improper handling of classified information on “home brew,” or allegations of “pay to play” arrangements between the secretary of state and donors to the Clinton Foundation, which could constitute bribery.

Apparently, however, there is legal precedent for the acceptance of a pardon being equal to an admission of guilt. It was established by a 1915 U.S. Supreme Court case, Burdick v. U.S. which has never been overturned. In other words, if Hillary takes the pardon, she’s admitting she committed at least one crime she committed and needs to be pardoned for.

Then again, is it even likely Trump is actually going to prosecute Hillary anyway? Pretty much as soon as he won, he announced that he no longer planned to. Even Weisberg points out, “Since being elected, Mr. Trump has been remarkably warm towards the person he used to call ‘crooked Hillary’.” It’s been speculated Trump’s promise not to prosecute was part of the phone call ensuring Hillary would concede. Then again, they’d been pretty good friends for the two decades leading up to the election.

Weisberg goes on to say he thinks Obama’s pardon for Hillary is forthcoming. Why not. The White House won’t deny the option is being considered, even though, again, Trump has come out to say he does not plan to prosecute Hillary anyway.

Obama’s pardon of Hillary will probably be worded a lot like (if not exactly like) Ford’s Pardon of Richard Nixon:

Now, THEREFORE, I, GERALD R. FORD, President of the United States, pursuant to the pardon power conferred upon me by Article II, Section 2, of the Constitution, have granted and by these presents do grant a full, free, and absolute pardon unto Richard Nixon for all offenses against the United States which he, Richard Nixon, has committed or may have committed or taken part in during the period from January 20, 1969 through August 9, 1974.

Hillary’s pardon will be just as ambiguously worded, to make sure and cover anything and everything (and there’s a lot to cover).

As projected, it’ll likely be dated for her entire tenure as Secretary of State, too.