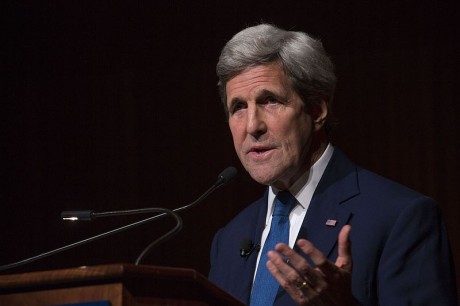 Barack Obama stabbed Israel in the back on Friday, and now John Kerry has slapped Israel in the face just five days later.  In a shameful speech that lasted for 71 dreadful minutes, U.S. Secretary of State John Kerry laid out his plan for peace in the Middle East on Wednesday.  His six-part plan is being welcomed warmly by the Palestinians, but it has further infuriated the Israelis.  Kerry claims that his plan reflects the emerging global consensus as to what a “final solution” will look like, and now we will wait to see what the 70 nations that will be gathering in France to discuss the Israeli-Palestinian conflict on January 15th will do.  There is a great deal of concern that the principles agreed upon at that conference will form the basis for a UN Security Council resolution that will be rushed to a vote before President-elect Donald Trump is inaugurated on January 20th.

The core of Kerry’s plan is the division of the land of Israel into two states.  The borders between Israel and “Palestine” would be based upon the 1967 ceasefire lines with mutually agreed upon land swaps.  The following comes from ynetnews.com…

Outgoing US Secretary of State John Kerry laid out the Obama administration’s parameters for peace between Israel and the Palestinians during a speech at the State Department on Wednesday that lasted 71 minutes, one of the longest in US State Department history.

Breaking sharply from longstanding US policy that foreign powers shouldn’t impose a solution, Kerry unveiled a six-part outline of what a future peace deal could look like. The outline tracked closely with principles long assumed to be part of an eventual deal, and Kerry insisted he was merely describing what’s emerged as points of general agreement.

Primarily, Kerry called to create a secure and recognized border between Israel and a contiguous Palestine along the 1967 lines, with “mutually agreed, equivalent (land) swaps.”

As part of the land swaps, Kerry insists that the Palestinians must be given land that connects the West Bank and the Gaza strip.  In his speech he stated that “Palestine must be viable and contiguous”, and he made it exceedingly clear that East Jerusalem will be the capital of the new Palestinian state.

Kerry went on to say that if Israel does not accept a two-state solution “it will not have peace with the rest of the Arab world, I can guarantee that.”

Kerry said a two-state solution, which calls for an independent Palestinian state existing peacefully alongside Israel, is the only way to guarantee the Jewish state’s long-term security in the region.

“If the choice is one state, Israel can either be Jewish or democratic, it cannot be both,” Kerry said.

Needless to say, Kerry’s speech sparked a tremendous amount of outrage among pro-Israel leaders here in the United States.

Yes John Kerry, if only this orange sliver was smaller there would be peace. pic.twitter.com/afvRO0O9Kq

One of the leaders that is condemning Kerry’s remarks is U.S. Senator Ted Cruz.  In a strongly worded statement, he accused Barack Obama and John Kerry of being “relentless enemies of Israel”…

Ted Cruz, a Republican senator and 2016 presidential candidate, lit into Kerry and Obama in a statement that accused of them being ‘bitter clingers.’

They’re ‘spending every last minute of this administration wreaking havoc domestically and abroad,’ he said.

‘These acts are shameful. They are designed to secure a legacy, and indeed they have: history will record and the world will fully understand Obama and Kerry as relentless enemies of Israel.’

And Donald Trump is speaking out as well.  On Twitter, he let the world know what he thinks about how the Obama administration has been treating Israel…

“We cannot continue to let Israel be treated with such total disdain and disrespect,” Trump tweeted. “The beginning of the end was the horrible Iran deal, and now this (U.N.!) Stay strong, Israel, January 20th is fast approaching!”

In response, Barack Obama actually got on the phone and called Donald Trump in an attempt to smooth things over.

After eight years of failure, Barack Obama has saved the very worst for last.  With less than 30 days to go in his presidency, he has chosen this moment to betray Israel, and by doing so he has greatly cursed America.

I don’t get upset about a lot these days, but this is something that is worth getting upset about.  If Obama would have just left things alone, everything would have been fine.  But instead of deferring to the next president on important matters, Obama has chosen to implement a “scorched earth policy” during his final month in the White House.

As we move into 2017, our relationship with Israel is going to be one of the biggest political issues that we are facing.

If you are anti-Israel, you are with Barack Obama, John Kerry, Hillary Clinton, the United Nations and all the rest of the globalists that are obsessed with dividing the land of Israel.

If you are pro-Israel, you are with Donald Trump, Mike Pence, Ted Cruz and all of the other brave leaders that are fighting the forces of globalism.

All over the world, the forces of anti-Semitism are rising.  Even here in the United States, there are large numbers of people that are virulently anti-Israel.

Ultimately, it is a spiritual thing.  Those that hate Israel and that hate the Jewish people are being inspired by the powers of darkness, and this cancer is spreading even among those that call themselves Bible-believing Christians.

God loves all people – and this includes the Israelis and the Palestinians.  And the ultimate solution to the problems in the Middle East would be to follow God’s blueprint, but unfortunately global leaders have their own ideas, and their anti-Semitic agenda is going to end up getting an enormous amount of people killed.