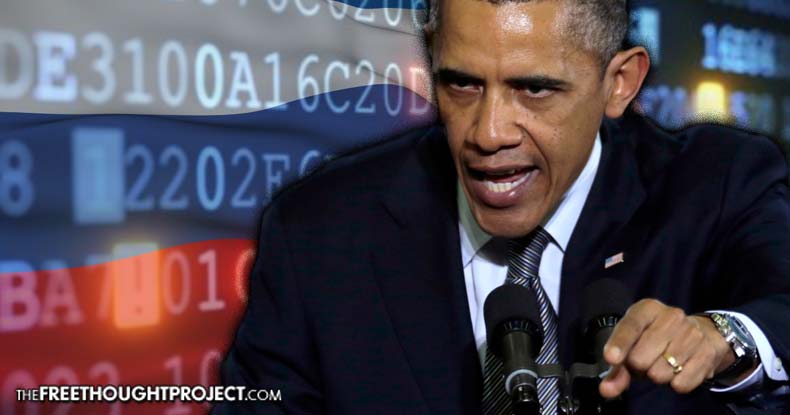 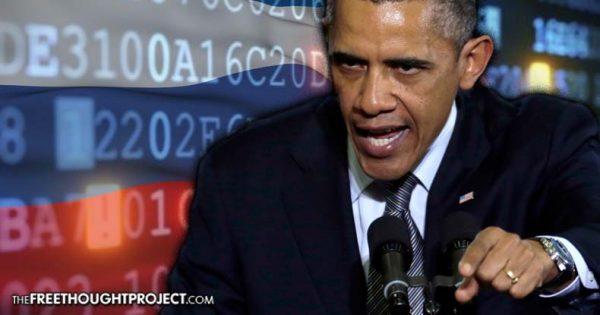 According to the albeit dubious Washington Post, the Obama administration will soon announce retaliatory measures against Russia for the putative role it played installing Donald Trump in the White House.

Once again citing unnamed “U.S. officials,” the Post reports the punitive moves “are expected to include covert action that will probably involve cyber-operations,” and the public will learn precisely what’s planned “as early as this week.”

Of course, laughably unexplained by the Post is how these officials feel announcing covert actions to the public would be to the advantage of the administration — but the outlet has of late displayed a penchant for providing tangible information — including, most glaringly, on the topic of Russian interference in the U.S. election.

That Russian State actors meddled in the election — in particular, by hacking the Democratic National Committee and Hillary Clinton’s campaign chair John Podesta’s emails to provide information to Wikileaks — has yet to be backed by even a shred of legitimate evidence.

In fact, the Post and New York Times published articles citing unnamed officials from the CIA, who ostensibly concluded Russia — and President Vladimir Putin, himself — ‘hacked the election,’ without providing the most basic explanation for how this was possible, who had done so, or why the hack was undertaken. Yet, countless left-leaning corporate presstitutes parroted the report as if it constituted established fact.

Now, with the problematic announcement of a future announcement on how Obama will seek reprisals for the theoretical hack, it appears the corporate media and U.S. government will be complicit — sans unassailable proof — in an act of aggression against Russia, no matter what form it takes.

As the Post explains, President Obama sought to employ powers provided in an executive order issued last year “to punish and deter foreign hackers who harm U.S. economic or national security,” but officials felt it could not “punish the most significant cyber-provocation in recent memory against the United States — Russia’s hacking of Democratic organizations, targeting of state election systems and meddling in the presidential election.”

But did this “most significant cyber-provocation in recent memory” even occur?

Wikileaks founder Julian Assange — the one person with critical firsthand knowledge — vehemently denies the Russians provided the DNC and Podesta documents, saying the caches didn’t come from hacks at all, rather, an insider leaked the information for transparency’s sake.

Further, several veteran Intelligence officials, including former CIA analyst Ray McGovern and NSA whistleblower William Binney, issued a statement in agreement with Assange, noting, in part, “harder evidence of a technical nature points to an inside leak, not hacking — by Russians or anyone else.”

To act aggressively, whether online or by other means, against another government without first proving beyond doubt that nation, indeed, took offensive measures is ludicrous — not to mention reckless — and will itself be seen as a first strike.

These unnamed officials, who spoke with the Post on condition of anonymity, noted “the White House is working on adapting the authority to punish the Russians,” perhaps by declaring U.S. electoral systems part of “critical infrastructure” — thus protected, in addition to power grids and the like, under Obama’s executive order — and notably punishable by cyber or even military actions.

“Obama issued the executive order in April 2015,” the Post explains, “creating the sanctions tool as a way to hold accountable people who harm computer systems related to critical functions such as electricity generation or transportation, or who gain a competitive advantage through the cyber­­theft of commercial secrets.

“The order allows the government to freeze the assets in the United States of people overseas who have engaged in cyber-acts that have threatened U.S. national security or financial stability. The sanctions would also block commercial transactions with the designated individuals and bar their entry into the country.”

“We regret that Washington continues this destructive line. We still disagree with this line and we believe that it very seriously harms our bilateral relations. Certainly, as this has been already in practice, the Russian side will take adequate measures,” Kremlin spokesman Dmitry Peskov told Russian media last Wednesday, according to TASS.

“We can only once again express regret and misunderstanding over this destructive persistence of our US colleagues.”

Yet, the U.S. continues posturing about theoretical Russian Hackers — a claim emphatically and repeatedly denied by the Kremlin.

Once again, however, this report from the corporate press constitutes plain Red Scare rhetoric designed to present the U.S. as the ‘tough guy’ in the situation — because that Red Phone is the standard means of communication between Washington and Moscow employed for typical negotiations.

Peskov, the Kremlin spokesman, dismissed the ominous overtones implied by NBC and other mainstream American outlets, noting, “this is a normal secure communication line, which the heads of state use for telephone negotiations.”

On December 9, the Washington Post published its dubiously ill-supported report citing an unnamed senior U.S. official — not specifying whether this person was part of an agency, bureau, or any other government body — who claimed,

“It is the assessment of the intelligence community that Russia’s goal here was to favor one candidate over the other, to help Trump get elected. That’s the consensus view.”

Further, the Post reported, “The CIA has concluded in a secret assessment that Russia intervened in the 2016 election to help Donald Trump win the presidency, rather than just to undermine confidence in the U.S. electoral system, according to officials briefed on the matter.”

However, no consensus had been reached among the 17 agencies of the Intelligence Community — in fact, as Reuters reported, “While the Office of the Director of National Intelligence (ODNI) does not dispute the CIA’s analysis of Russian hacking operations, it has not endorsed their assessment because of a lack of conclusive evidence that Moscow intended to boost Trump over Democratic opponent Hillary Clinton, said the officials, who declined to be named.”

A lack of unanimity on the assertion Russia tampered in the election should, under any circumstances, quash plans to retaliate — but belligerent rhetoric continues and the legality of issuing a response the U.S. deems appropriate is under consideration.

“But each time, unfortunately, we could not get some more or less reasonable substantiation of these accusations, some specific facts or something else.

“And, that is why, of course, all these accusations are completely unfounded and are not backed by any arguments.”

“I think there is no doubt that when any foreign government tries to impact the integrity of our elections . . . we need to take action. And we will — at a time and place of our own choosing. Some of it may be explicit and publicized; some of it may not be.”

This perilous volley of threats and evidence-less allegations have amplified hostilities between the two former Cold War foes to an astonishing degree — some analysts have even warned such posturing could set the foundation for armed conflict.

In the interest of preventing a needless war and to set the record straight, journalist Jason Leopold and PhD candidate at MIT and research affiliate at Harvard, Ryan Shapiro, filed myriad Freedom of Information Act requests seeking further information on allegations of Russian hacking and election interference.

Unsurprisingly, that effort proved even more fruitless than expected — and the pair has now filed a lawsuit against the CIA, FBI, Department of Homeland Security and the Office of the Director of National Intelligence for failing to comply with the requests.

“According to the Department of Justice, agencies are required to notify the party who issued the information request within 10 days of receiving a letter asking for expedited processing. Leopold and Shapiro first sent their FOIA request to the FBI, DHS, CIA and the ODNI on Dec. 14 and a second request to the CIA on Dec. 15 […]

“The plaintiffs seek information about any ongoing investigation into ties between Donald Trump or anyone associated with his campaign and interference from the Russian government in the election. Leopold and Shapiro also asked for communications between Congress and the Republican and Democratic campaign committees, as well as Hillary Clinton’s campaign in reference to Russian involvement with the 2016 presidential race.”

Whether their effort will result in proof linking Russia to the hacks — or to President-elect Trump — remains to be seen.

Russia has also tired of the belligerent rhetoric bandied about by Obama and American presstitutes, as Peskov recently asserted the United States must “either stop talking about it or finally produce some evidence, otherwise it all begins to look unseemly.”

Now, Americans find themselves in the uncomfortable position under the governance of an administration discussing retaliatory measures against world and nuclear power, Russia — while still waiting for the State to provide even a modicum of evidence it would have grounds to do so.