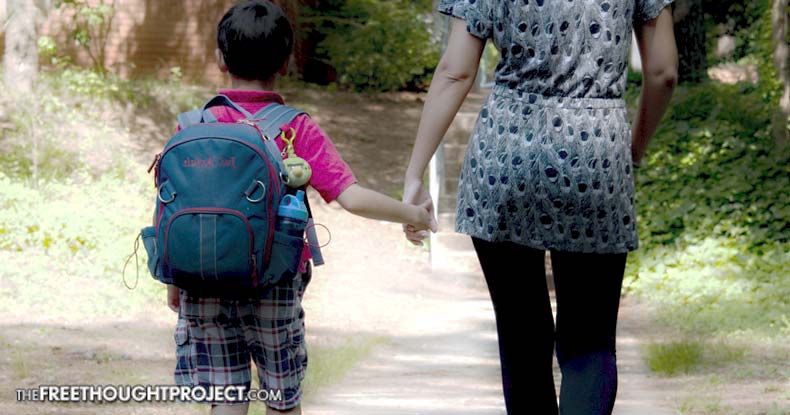 Magnolia, TX — Walking your child to and from school in Magnolia, Texas can now end in your extortion through fines and even jail time thanks to a new policy implemented by the school’s principal. Bear Branch Elementary School parents have done some hard learning since the year began about the relationship between schools and the American police state after they were told they will be charged with trespassing for walking their own children onto school grounds.

“She’s threatening to arrest people,” said Wendy Jarman to FOX 26 about principal, Holly Ray — and she’s correct. Since the beginning of the year, multiple parents have been cited, threatened with charges, and threatened with arrest for the entirely ordinary act of dropping off their kids at school.

Parents at the school have even started a petition and garnered hundreds of signatures to reverse what they are calling bully tactics. However, it has all been in vain.

Principal Ray is getting plenty of negative publicity for her policy, but she has no plans of changing it and has cops to back her up. The newly enacted policy is enforced by Montgomery County Constables.

“This has happened to many parents,” Jarman says. “They have been cited. They have been threatened, if they step one foot on school property, they will be arrested and charged with who knows what.”

Another parent pointed out, when speaking with FOX 26, that he was also threatened. The ridiculous nature of this policy, backed by the force of police, has now sent parents running for the door.

Wendy Jarman has since pulled her children out and placed them in private school. Jarman, who lived in the neighborhood behind the school, used to enjoy the walks with her children and escorting them in to class — but they can’t do it anymore.

Frank Young is another parent who’s fled the school because of the police state tactics.

“Mrs. Ray’s policy is implying that a parent doesn’t have the ability or capability to decide what is safest for her children and that the school district does,” Young says. “I disagree.”

According to FOX 26, who asked the school district for a response on the matter, the policy is in effect with the goal of having a safe dismissal process. But what’s safer than allowing a parent to escort their children to and from school on foot?

According to many of the parents, who’ve been attending Bear Branch Elementary School for years, there was nothing unsafe about the old pick up and drop off procedures. And, according to FOX 26, the parents say this is merely a principal overstepping her boundaries.

According to Young, this policy has infuriated many of the other parents too, but they are simply going along to get along — something this brave parent refuses to do.

“The most toxic thing we can do for our kids is not fight for truth and justice,” Young says.

According to FOX 26, multiple other parents have been threatened with jail, but are not ready to speak about it publicly. Apparently, the tyranny in this school has gotten so bad that it’s not just parents who are leaving, but teachers and staff too.