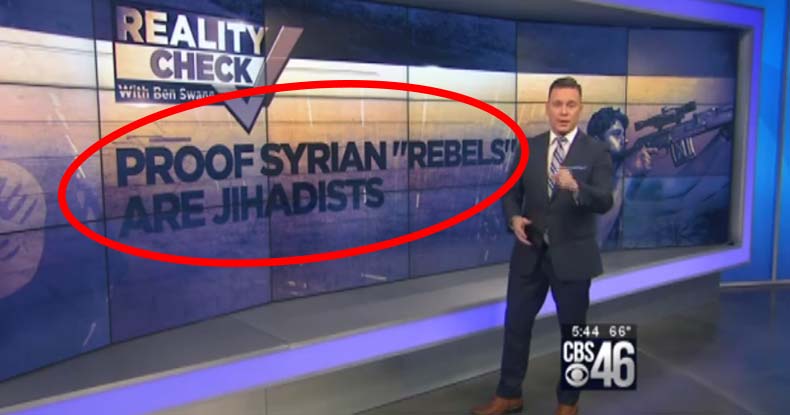 Neoconservatives are in a state of desperation over the meltdown of their latest attempt at regime change. Having failed to initiate all-out war in Syria before the 2016 election, neocons and liberal interventionists are watching in horror as their so-called “moderate rebels” are driven out of Aleppo.

Over the past five years, U.S. mainstream media dutifully played its part in pushing the American foreign policy agenda of intervention and endless war. MSM shamelessly framed a narrative of “good vs. evil” in Syria, with America righteously supporting an organic fight for freedom against the bad guys of the Assad regime.

In doing so, they pushed fake news such as the alleged sarin gas attack by Assad on the Syrian people – a false flag that almost triggered the war neocons wanted. MSM continued to abandon skepticism and fact-checking, ignoring the reality that U.S.-supported “moderate rebels” were actually full of al-Qaida jihadists and ISIS extremists.

One news anchor was unafraid to report the truth. In 2015, Ben Swann produced a damning report as part of his Reality Check series. Using Pentagon documents, he showed how the U.S. wanted ISIS to emerge in Syria to help carry out their goal of regime change, by nurturing the Salafist sect in eastern Syria.

Swann continues to be a lone voice of reason as MSM echoes the American foreign policy narrative. Last week, he reported again that so-called “moderate rebels” are actually made up of al-Qaeda jihadists and ISIS terrorists. National media figures promptly labeled this “fake news,” according to Swann.

In a new Reality Check, Swann destroys the fake news charge and, once again, informs Americans about the truth in Syria.

“One week ago I told you that national media is not giving you the full story about what is happening in Syria. Specifically, that the Free Syrian Army and the so-called Syrian rebels who have now lost control of eastern Aleppo are not freedom fighters. They are, in fact, aligned with terror organizations.”

Swann says other media are asking, ‘Where’s the proof?’ Apparently, the job of echoing the Washington foreign policy agenda is so consuming that they don’t have time for fact-checking.

So Swann does the job for them, describing how “there are really only two groups fighting against Assad – ISIS and al-Qaeda,” also acknowledging there are dozens of smaller factions involved as well.

The Free Syrian Army (FSA) was formed in 2011, but within one year there were already widespread reports that al-Qaeda in Syria had infiltrated. In 2012, Swann was the first reporter to question Obama directly about arming a group that had members of al-Qaeda, as he shows in a brief clip.

Of course, Obama obfuscates and says the U.S. is providing non-lethal support to people committed to a political transition in Syria. But in 2013, the CIA began delivering weapons to Syrian rebels, marking a “major escalation of the U.S. role in Syria’s civil war.”

According to their report, 10,000 of the estimated 100,000 fighters in Syria were linked to al-Qaeda. Another 35,000 belonged to “powerful factions” fighting for an Islamic state within a larger Middle East caliphate. Another 30,000 belonged to groups with an “Islamic character.”

This means that only about 25 percent of the “moderate rebels” were actually fighting for secular nationalist groups friendly to the West. By 2013, about 75 percent of the fighters were jihadists and terrorists.

The U.S. continued to send money and weapons to “find and train moderate rebels” through 2015. In a stunning revelation, that same year 3,000 FSA fighters declared allegiance to ISIS – proving once again that U.S. meddling in the Middle East always bring more violence and extremism.

A week later, the $500 million program to find and train moderate rebels was halted when the Pentagon admitted it had only trained four or five fighters.

The International Business Times reported in 2015:

“The moderate movement in Syria could be considered officially dead as of last week, when the last U.S.-backed rebel faction, Harakat Hazzm disbanded, its members joining extremist groups such as the Nusra Front, the al-Qaeda offshoot in that country. Some of the men joined a group called the Levant Front, a coalition of rebel militias that also has ties to al-Qaeda.”

Despite all of this, the U.S. continued sending money and weapons into Syria through 2016, including 3,000 tons of weapons such as rocket-launchers and anti-tank guided weapons systems.

Ben Swann concludes the so-called “moderate rebels” are now a fiction. The U.S.-supported Syrian opposition is not fighting for freedom, but “are looking to enslave [Syria] as they have so many other places.”

It’ s doubtful the MSM will accept this reality, which contradicts the Washington narrative essential to regime change efforts in Syria. The public must not find out that U.S. meddling has once again been the impetus for massive violence and unrest in the Middle East. Even Ben Swann can be labeled as a purveyor of fake news.

Ironically, CBS News, which hosts Reality Check, has itself pushed the “fake news” mantra, promoting a blacklist put together by professor Melissa Zimdars, which attempted to lump credible alternative media with actual purveyors of fake news. It’s a concerted effort to discredit voices of dissent who dare question the Washington foreign policy narrative.