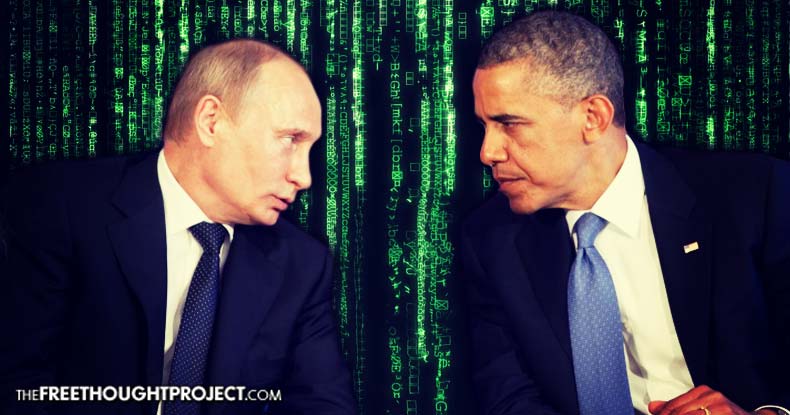 President Obama has amended a previous Executive Order allowing the United States to tangibly respond to Russia hacking the 2016 presidential election — but that claim has never been proven.

However, according to a statement from the White House,

“The increasing use of cyber-enabled means to undermine democratic processes at home and abroad, as exemplified by Russia’s recent activities, has made clear that a tool explicitly targeting attempts to interfere with elections is also warranted.”

To wit, the Executive Order, “Blocking the Property of Certain Persons Engaging in Significant Malicious Cyber-Enabled Activities,” has now been updated to include the following:

“Tamper with, alter, or cause a misappropriation of information with the purpose or effect of interfering with or undermining election processes or institutions.”

Obama has now ordered 35 Russian diplomats — declared officially persona non grata — expelled, issued sanctions against five entities and six civilians, and will close two Russian compounds in response to allegations American diplomats were harassed in Moscow. All of this to retaliate against Russia, despite no solid evidence ever proffered indicating The Russians interfered with the U.S. election, much less hacked anything at all.

According to the White House, the named persons and diplomats will now have just 72 hours to leave the United States, and,

“In addition to this action, the Department of State has provided notice that as of noon on Friday, December 30, Russian access will be denied to two Russian government-owned compounds, one in Maryland and one in New York.”

A joint report has been issued from the Department of Homeland Security and the FBI purporting to detail how, exactly, The Russians performed cyber attacks in order to sway the election in favor of Donald Trump — but that report comes with a telling disclaimer:

“This report is provided ‘as is’ for informational purposes only. The Department of Homeland Security (DHS) does not provide any warranties of any kind regarding any information contained within.”

In other words, although the DHS seal is emblazoned on the report, it doesn’t guarantee the information therein to be true. Worse, the report itself provides no proof Russian State actors hacked anything — the premise for Obama’s actions against Russia, today and going forward.

Indeed, the list of organizations “likely” associated with Russian Civilian and Military Intelligence services (RIS) listed by DHS and the FBI includes — in all seriousness — Fancy Bear, a group affiliated with the activist collective, Anonymous, dedicated to sharing anti-doping information about the Olympic Games.

Further, though the report appears to provide technical details which enabled The Russians to hack into the Democratic National Committee and Hillary Clinton campaign chair John Podesta’s emails is rife with trepidatious language suggesting the FBI and DHS still harbor doubt.

Wikileaks reviewed the joint report, and noted it covered the hacking of voting machines, for which there is no evidence:

Obama's Exec Order does not cover WikiLeaks. It covers hacking of voting machines–for which there is no evidence. https://t.co/KeHe0CPwhc

“Cyber threats pose one of the most serious economic and national security challenges the United States faces today. For the last eight years, this Administration has pursued a comprehensive strategy to confront these threats. And as we have demonstrated by these actions today, we intend to continue to employ the full range of authorities and tools, including diplomatic engagement, trade policy tools, and law enforcement mechanisms, to counter the threat posed by malicious cyber actors, regardless of their country of origin, to protect the national security of the United States,” said the White House.

A U.S. official, cited by Zero Hedge, asserted, “By imposing costs on the Russian diplomats in the United States, by denying them access to the two facilities, we hope the Russian government reevaluates its own actions, which have impeded the ability and safety of our own embassy personnel in Russia.”

But the claims of Russian government-led hacking and cyber attacks still aren’t unassailably proven in this threadbare report — so, apparently, we’ll have to take Obama’s word for it, as he stated, “data theft and disclosure activities could only have been directed by the highest levels of the Russian government.”

Russia immediately responded to the aggressive move by the Obama administration.

As IFX reports, Russian Commissioner Foreign Ministry on human rights, democracy and the rule of law, Konstantin Dolgov, declared “any anti-Russian sanctions are futile and counter-productive” and “I can only reconfirm this hysteria demonstrates the complete lack of orientation by the outgoing U.S. administration.”

Dolgov added that such “unilateral steps” would “damage relations and complicate their recovery in the future.”

Leonid Slutsky, head of Russia’s State Duma Committee on Foreign Affairs, warned,“The US sanctions against Russia and the expulsion of 35 diplomats in 72 hours are the signs of a real paranoia. Without any grounds for it another round of extremely aggressive steps towards our country are being made basing only on mere assertions.”

Then, on Twitter, the Russian Embassy in the U.K. tweeted an appropriate response to today’s stunning announcements:

President Obama expels 35 🇷🇺 diplomats in Cold War deja vu. As everybody, incl 🇺🇸 people, will be glad to see the last of this hapless Adm. pic.twitter.com/mleqA16H8D

Nonetheless, sanctions have been imposed, alleged wrongdoers named, and Obama has acted punitively against Russia — without providing solid proof the Russian government meddled in the U.S. election at all.

“All Americans should be alarmed by Russia’s actions,” Obama implored, adding he only took these actions after “repeated private and public warnings that we have issued to the Russian government.”

And although he characterized today’s actions as “a necessary and appropriate response to efforts to harm U.S. interests in violation of established international norms of behavior,” the American public — and Russia — deserve to see tangible evidence of those efforts. Yesterday.