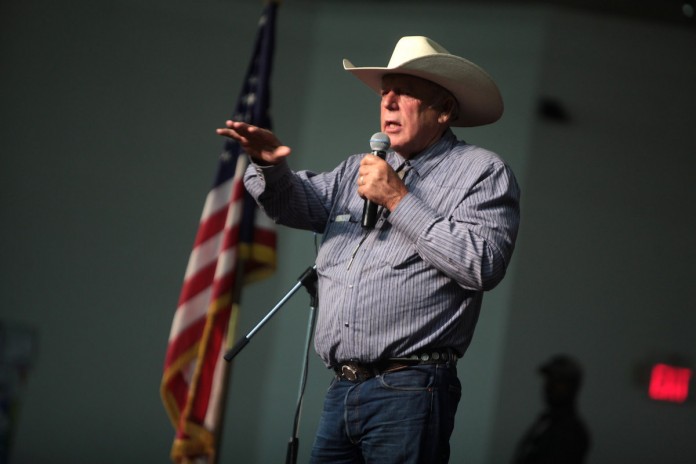 (INTELLIHUB) — With a stroke of the pen President Obama has unilaterally declared vast swaths of land in Utah and Nevada as two new national monuments, thus putting them under control of the federal government.

Startlingly, the area in Nevada includes the site of the infamous Bundy Ranch standoff as well as land very close to the Bundy Ranch itself. With this move Obama has possibly triggered another armed standoff while also heading off any moves set to be made by incoming president Donald Trump.

A “fact sheet” put out by the White House reads:

In addition to protecting more land and water than any Administration in history, President Obama has taken unprecedented steps to elevate the voices of Native peoples in the management of our natural resources.  Today’s actions build on this important work, and further demonstrate the President’s commitment to protecting sacred sites and our land, water and wildlife for future generations.

Located in Clark County, Nevada just northeast of the outskirts of Las Vegas, the Gold Butte National Monument spans nearly 300,000 acres and will protect significant cultural resources, important geological formations, and vital plant and wildlife habitat. The monument will provide critical protections for important Native American historical sites, as well as areas that are currently used for traditional purposes by tribes. Notably, the area includes abundant rock art, archeological artifacts, and rare fossils, including recently discovered dinosaur tracks dating back hundreds of millions of years. In recent years these resources have faced increasing damage from threats such as deliberate destruction and vandalism, and today’s designation will help ensure that these cultural and archaeological treasures are better protected.

The monument will serve as an important connection between already protected lands, including Lake Mead Recreation Area and the Grand Canyon-Parashant National Monument across the Arizona border, protecting key wildlife corridors for large mammals such as desert bighorn sheep and mountain lions, and vital habitat for the threatened Mojave desert tortoise. Additionally, the monument will protect important historic resources. Structures that detail western ranching heritage can still be found in the Gold Butte area, as well as an early twentieth-century abandoned mining town and sites associated with Spanish explorers from the late eighteenth century.

Today’s action follows decades of local support from tribes, local stakeholders and conservationists, and draws from legislation that was first introduced in 2008.

Right now it is extremely difficult to confirm exactly how much of the land in and around the Bundy Ranch is now a national monument but a map put out by the Las Vegas Review seems to line up directly with the Bundy grazing allotment.

Vocativ is reporting that multiple individuals involved with the original Bundy standoff have already made it clear that they plan to stand up to this latest federal tyranny.

“Members of the self-styled militias that swarmed to the aid of Cliven Bundy outside of Las Vegas in 2014 — and who later joined the rancher’s sons to seize a federal wildlife refuge in rural Oregon — said they were readying for another showdown. Obama’s move on Wednesday to protect 300,000 acres of federal land around Gold Butte, close to the Bundy ranch, comes as two dozen people await trials for their roles in the Nevada and Oregon standoffs, which emboldened right-wing militants across America and became a powerful symbol of anti-government sentiment,” read the report.

“Get your gear ready,” wrote Jon Ritzheimer, one of the men who used handguns and assault rifles to hole up in Oregon’s Malheur National Wildlife Refuge for 41 days last year. “Obama just designated the Bundy Ranch a national monument.”

“Others with ties to patriot groups and militia movements online responded with a bit more force. “Locked and loaded ready to go,” wrote Chris Border, a member of the Cliven Bundy’s Army! Facebook group, which boasts more than 2,000 members. “Tired of this crap and time to do something.”

One has to wonder what exactly are the reasons for this new land grab by President Obama in the last days of his presidency. It’s extremely hard to imagine that it is not at least partially connected to the Bundy’s and the standoffs in both Nevada and Oregon.

More importantly, this area may actually include land that has documented precious metals throughout it as detailed in the video report below.

More information as to the exact implications of this massive land grab are sure to be released in the coming days and will be covered here extensively.

Note: An interesting discussion about the implications surrounding Obama’s new land grab was also recently released by patriots in the area, which can be viewed here.

Update: The Hill is now reporting that even if incoming President Donald Trump wanted to reverse this massive land grab he could face a “prolonged legal battle.”

We now know that this move by Obama was made to box Trump in.

No president has ever reversed a predecessor’s actions to create a monument under the Antiquities Act.

The Obama administration and environmental groups argue it can’t legally be done, though some Republican lawmakers argue otherwise.

Make no mistake, this massive federal government power grab was done in the last days of Obama’s presidency with the hopes of it being impossible to overturn.

Alex Thomas is a reporter and editor for Intellihub News. He was a founding member of what later became Intellihub.com and an integral part of the team that destroyed the mainstream media blockade on Bilderberg in 2012.