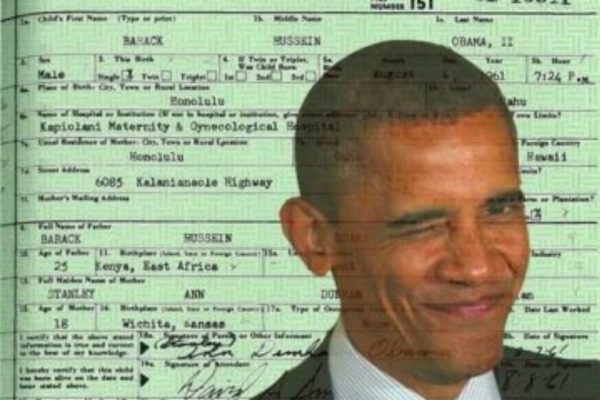 On December 15, after a five-year investigation Maricopa Country, Arizona, Sheriff Joe Arpaio released new forensic analysis evidence confirming that Barack Obama’s alleged birth certificate is a forgery. This was verified by completely independent forensic experts who discovered an authentic birth certificate from which forgers created a computer-generated modification transforming it into an official Obama birth certificate. The counterfeited document was released in 2011.

Arpaio noted that the fraud was a major violation of federal law—regardless of where Obama was born—and sent his findings to Congress. Predictably his conclusions were ignored by the mainstream media.

But Obama has been confessing unconsciously to his illegal presidency for some time in exactly the way Jesus and cutting-edge psychoanalysis reveals—in one “log in his eye” projection after another. Remember the new understanding of the human mind. A person’s subconscious, far more astute than we ever realized, quick-reads himself in the blink of an eye. So we listen to Obama’s projections which are both his quick-read take on himself and a model of correction.

This monumental paradigm shift in psychology allows us to understand unconscious communication and the human mind’s startling super-intel awareness of conflicts and resolution. This new knowledge about the human mind allows us to fully grasp a man’s meaning.

Understand the new science of unconscious communication provides the exclusive hard evidence—apart from circumstantial evidence (fraudulent birth certificate, refusal to release any records, etc.)—that Obama is an illegal president. His unconscious super-intel mind has specifically confessed in its unique language.

Looking back at Obama’s recent comments, we find distinct projection confessions. While in Germany on November 17 he spoke about false news (a projection in itself) and how to determine the truth.

Obama declared, “In an age of so much misinformation—packaged very well…if we’re not serious about facts, about what’s true and what’s not, if we can’t discriminate between serious arguments and propaganda then we have problems.”

In other words, he has disseminated misinformation about the legality of his smoothly packaged presidency, lied about the facts and propagandized America from the beginning of his candidacy.

When the media, the Congress and the courts—all the way to the Supreme Court— submitted to Obama’s propaganda, together they carried out the biggest birth conspiracy of all: accepting his U.S. birth and Hawaiian birth certificate as true facts.

Indeed, they didn’t know what to protect or what to fight for—our very foundation, the rule of law. That’s how close we are to losing America. No wonder Congress can’t face Arpaio’s findings.

Obama’s super-intel warns us, “We can lose so much of what we’ve gained in terms of democratic freedoms…prosperity we come to take for granted.” He’s hinting that we can lose our democracy. We can take our prosperity for granted as great nations invariably do before they fall from within.

We return to Obama’s admonition to get the facts—precisely what Sheriff Arpaio has just provided. Facts are determined by reality, and our leaders have consistently ignored the reality of Obama’s phony birth certificate.

Here is where the breakthrough to the magnificent super-intel comes into play. Projections identify accurate unconscious facts someone wants to hide. The bottom line is that our brilliant super-intel picks up on the facts. It’s vastly superior to our conscious minds which remain prone to blind spots.

Unconsciously Obama’s consistent projection imagery presents the deeper fact of his illegal presidency almost daily. In Obama’s extensive interview with Rolling Stone magazine one day after the election, he said the way to bring the country together in the face of false news “is how we create a common set of facts.” Note the repetitive projection that he has created “fake news” about his presidency, but he points again to the answer—get the facts.

In the interview, he specifically points to his illegal presidency, and he spontaneously links Trump’s surprising election to his own election.

Early on election night in 2008 his key advisors told him, “We don’t think we’re gonna win this thing.” Read his super-intel imagery; he didn’t think he should have won the election and didn’t really win because he had been ineligible to run.

Confirming his hidden confession, Obama then told how he would advise Trump, “Number 1, however you campaigned, once you’re in this office, you are part of a legacy dating back to those first Revolutionaries. And this amazing experiment in democracy has to be tended.”

It’s another projection confession. Obama campaigned as the first revolutionary illegitimate president and took office as such. He failed to tend to—protect—America’s amazing democracy. Instead he experimented with it, breaking the rule of law, our nation’s very foundation—and got away with it.

Don’t overlook his continued unconscious instructions to Trump: tend to democracy by enforcing the rule of law. Unknowingly Obama continues to instruct Trump to investigate his illegal presidency. As demonstrated in my recent book, The Stockholm Syndrome President: How Trump Triggered Obama’s Hidden Confession, Obama intuitively pleaded with Trump to hold him accountable and free him from his secret control by radical Islam. This led to Obama’s illegal candidacy and attack on America. Now Trump has new factual evidence: Arpaio’s proof of a forged Obama birth certificate.

In the Rolling Stone interview, Obama makes a familiar reference to immigrants secretly referring to himself. The 2016 election results showed that “Democratic immigration-rights activists failed to realize borders mean something to the majority of Americans,” he said. His super-intel is saying he was an immigration-rights activist about his illegal presidency entitled to make up his own rules and assault millions of Americans who knew that without borders we have no country. His super-intel functions as a “rule of law” activist correcting him and confessing to his great misdeed.

His denial confession reveals his contradictory thinking. He insists that “the rule of law and values that stay true to our (his) immigrant roots…don’t have to be contradictory.” Notice Obama’s illogical thinking—he can both break the law and keep it at the same time as his key imagery declares, “I am an immigrant rooted in an illegal presidency.”

This matches his earlier comment that fake news created a “dust cloud of nonsense”—a perfect description of his fake presidency.

In rich projection imagery he then tells of people on Facebook “passing crazy stuff about [how he] has banned the Pledge of Allegiance.” Again secretly he admits that he behaved in a crazy way running as an illegal president and totally destroyed his allegiance to America. He reveals how distorted—“crazy”—his conscious thinking is so that it allows him to severely violate the law and it means nothing. His reference to the “Pledge” points to the oath of office he specifically violated on his Inauguration Day in 2009. He knows his presidency should be banned. He should still be impeached.

In the end Obama’s super-intel provides the antidote to his misleading of America with his illegitimate election. The answer—come back to the facts.

The interview took place in the Oval Office. Obama commented, “Sitting behind that desk is sobering…it will have an impact on him [Trump] as it has on every president.” Obama soberly and solemnly acknowledges his true legacy as America’s only illegal president. He cannot live with himself without telling the truth subliminally.

His super-intel reveals the stunning solution now, “I think the most important constraint on any president is the American people themselves, of an informed citizenry that is active and participating and engaged.” It’s as though he’s advising, “American citizens—of which I am not one—get the facts about my horrendous illegal presidency. Hear my super-intel telling you that secret fact again and then constrain me. Match it with the circumstantial facts of my suppression of my records. Match it with my forged birth certificate—now an undeniable fact.

Even our conservative leaders can suffer Beltway blindness. One leader—an outsider—saw it. Donald Trump was certain Obama was an illegal citizen. Can he now return to that belief for America’s sake? Obama himself tells us how important it is that he be brought to justice—America’s rule of law restored to its rightful place. Obama’s super-intel speaks not only for himself but for all America—to fight for and protect our nation.
Arpaio has done his part, now it’s up to the citizens.

Obama’s encouraging Americans to become informed and then take action. Constrain him by urging—insisting—their congressional representatives restore the rule of law. Deep down Obama knows he should be impeached—it’s the only way for justice to be satisfied.

Because of that unconscious fact he promises “that is going to be something that I will, in my own modest ways, continue to try to encourage for the rest of my life.” Obama will continue to confess subliminally. His inner God-given moral compass demands it.

ANDREW G. HODGES, M.D., is a psychiatrist in private practice, a former clinical professor of psychiatry (UAB School of Medicine), and a noted forensic profiler. Experts including FBI agents believe his unique “thoughtprint decoding” method will one day become a fixture in law enforcement much as identifying fingerprints. The author of nine books, he has been interviewed extensively in the media with appearances on Fox News, CNN, ABC, MSNBC and Court TV. His website is AndrewGHodges.com

Rewriting The History of 9/11? Some Schools Are Trying
The Lid

ALERT: WATCH As Trump Supporter’s House BOMBED In THIS State- LOOK At The Suspect- The Left Is Declaring WAR
AFF