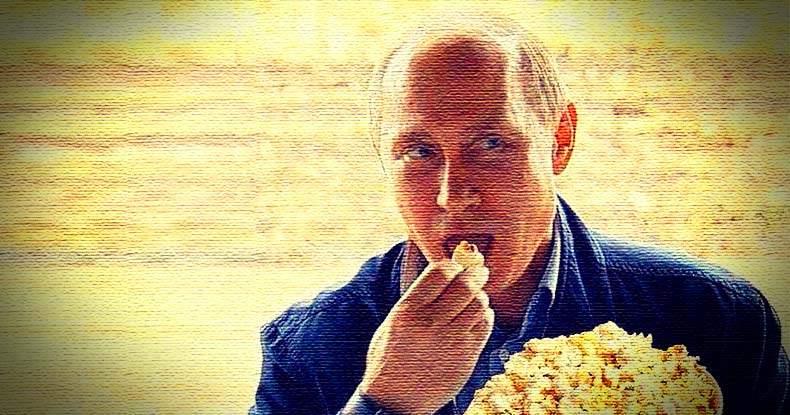 Russian President Vladimir Putin broke with Foreign Minister Sergey Lavrov — who had earlier vowed to expel 35 U.S. diplomats in response to the same move by the Obama administration — announcing Russia would not stoop to unilateral pettiness displayed by outgoing American leadership, stating:

“We reserve the right to retaliate, but we will not sink to the level of this irresponsible ‘kitchen’ diplomacy. We will take further moves on restoring Russian-American relations based on the policies that the administration of President-elect Donald Trump adopts.”

Further, Putin deftly admonished the timing of actions by the U.S., promising American diplomats in Russia would encounter no restrictions of movement or business — and even extended a personal invitation their children spend the New Year holiday celebrating around the Christmas tree at the Kremlin.

Yesterday, the White House issued an eleventh-hour amendment to a 2015 Executive Order allowing proportional cyber and military response to attacks on “critical infrastructure” to include State actors who “[t]amper with, alter, or cause a misappropriation of information with the purpose or effect of interfering with or undermining election processes or institutions.”

By so doing, the administration was then able to issue sanctions against Russian entities and individuals — including the expulsion of 35 diplomats from the United States within 72 hours of the decree, and barring entry to two compounds — as a response for allegations ‘Russian hackers’ had interfered in the presidential election.

Obama boldly declared “data theft and disclosure activities could only have been directed by the highest levels of the Russian government” — intimating these actions were coordinated from as high a position as Putin, himself — an accusation previously and repeatedly laughed off by Russian officials.

Indeed, no proof of the ‘hackers’ claim has yet been offered — a joint ‘report’ from the Department of Homeland Security and Federal Bureau of Investigation released the same day bore no evidence Russian State actors had meddled in the electoral process, much less hacked systems of the Democratic Party or the election.

Notably, that joint ‘report’ even came with a disclaimer which, in essence, says DHS does not back the information it contains, stating,

“This report is provided ‘as is’ for informational purposes only. The Department of Homeland Security (DHS) does not provide any warranties of any kind regarding any information contained within.”

Russian politicians expressed disgust with the moves by the Obama administration — undertaken despite the complete lack of evidence Russia had done anything wrong — as a provocation from a moot regime on its way out of office.

Konstantin Dolgov, Russian Commissioner Foreign Ministry on human rights, democracy and the rule of law, replied to the expulsion of diplomats and barring of entry into two Russian-owned compounds located inside the U.S., noting,

“I can only reconfirm this hysteria demonstrates the complete lack of orientation by the outgoing U.S. administration.”

Lavrov balked at the overtly aggressive actions, stating publicly the moves could not go unanswered:

“Of course, we cannot leave such mischievous tricks without a response. Reciprocity is the law of diplomacy and of international relations.”

Konstantin Kosachev, head of the International Committee of the Russian Upper House of Parliament, told RIA Novosti, as cited by the Observer,

“The leaving administration has no reason and no political or moral right for such drastic and disruptive steps with regards to bilateral relations with Russia. Forgive me for being harsh, but I just cannot find other words: this is the agony of not the lame ducks, but of political corpses. [President Obama] put at stake the US’ reputation as an adequate state that ensures policy continuity in the process of change of power.”

Putin — seemingly the only cool head in heightening tensions between the two former Cold War foes — decided against the tit-for-tat actions traditionally permitted under rules of international diplomacy, and instead brutally but flatly excoriated the Obama regime, noting:

“It’s a pity that the current U.S. administration is finishing their work in such a manner.”

In one fell swoop — with an iciness biting to the bone — it appears Putin can be declared the victor in this absurd and unnecessary battle of will.