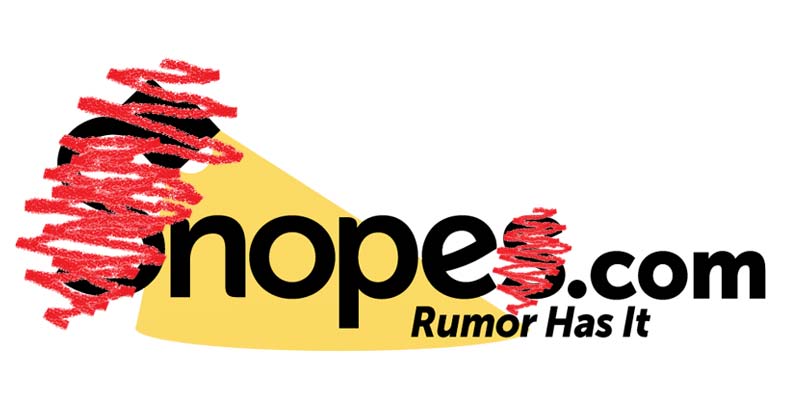 Snopes, one of the new arbiters of Fake News for Facebook, has been utterly remiss in its fact-checking duties by failing to report the false allegation The Russians hacked into Vermont’s power grid — perhaps because the original claim appeared in the Washington Post.

But for whatever reason, Snopes — whose CEO David Mikkelson stands accused by ex-wife Barbara Mikkelson of embezzling company money to hire prostitutes — simply didn’t bother to report on the Post’s dangerous assertion Russian state actors had tampered with critical infrastructure.

In fact, it simply isn’t true.

“While our analysis continues, we currently have no information that indicates that the power grid was penetrated in this cyber incident,” DHS assistant for public affairs J. Todd Breasseale said in a statement after the Post’s article justifiably garnered national attention.

Snopes, however, apparently didn’t deem the claim significantly influential to report as false, despite its perilous underlying suggestion — given attacks on the critical infrastructure are considered worthy of forceful response by the U.S. government — Russia should be targeted for military retribution.

But Snopes remained mum on the subject. Labeling the Post’s latest Fake News about Russia as ‘false’ should be plastered on the fact-checker’s front page — it not only isn’t there, keyword searches for anything related to Vermont, Russian hackers, the power grid, Washington Post, and more find no results for this particular story.

According to the Post’s editor’s note,

“An earlier version of this story incorrectly said that Russian hackers had penetrated the U.S. electric grid. Authorities say there is no indication of that so far. The computer at Burlington Electric that was hacked was not attached to the grid.”

But Snopes — who will soon be part of a team tasked with deciding whether or not news items should bear the Scarlet Letter term, ‘disputed,’ on the world’s largest social media platform — is completely derelict of duty.

Tasked along with Politifact, FactCheck.org, the Associated Press, and ABC News with vetting the veracity of news items posted to Facebook in the near future, Snopes and the others have been repeatedly accused of liberal bias. This has understandably raised alarm that accurate but right-leaning news items — or any articles not in tandem with the political left establishment — will be unjustly branded as Fake News, punished by Facebook’s unforgiving algorithms, and, thus, have a chilling effect on dissenting opinion.

Beyond basic bias, however, Snopes not excoriating the Washington Post’s egregiously fake story on The Russians Hacking Vermont shows the organization has no tangible interest in actual fact-checking — rather, the outlet appears to spend its time attacking independent, alternative, and right-leaning media organizations.

And it does so even when the information published is accurate and verifiable — or flagrantly and intentionally false.

To wit, Snopes has even ‘debunked’ an obviously fake meme, which had been intended to be a joke amongst friends — and multiple other items — without so much as contacting the people involved.

Snopes also attempted to ‘debunk’ the story of a man given a DUI, who had only caffeine in his system, by claiming that the Free Thought Project “(implied) his legal troubles were the result of merely drinking too much coffee.”

Make no mistake, a fact-checker who doesn’t take the time to debunk a viral claim of Russia hacking the U.S. electrical grid — that has since been retracted for being Fake News — has no business being tasked as Facebook’s arbiter of Fake News.

Instead, Snopes’ grievously deficient debunking of the McCarthyite corporate press proves the dangers of planned soft censorship — and the need to maintain an open platform for all opinion — one where alternative media can continue unhindered in calling out corporate media’s lack of journalistic credibility.