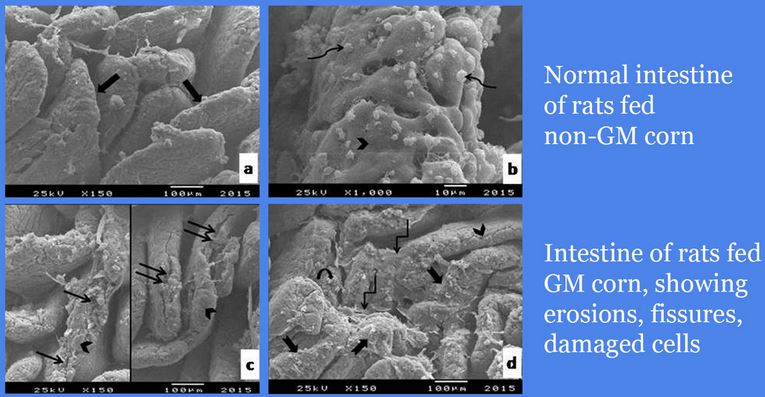 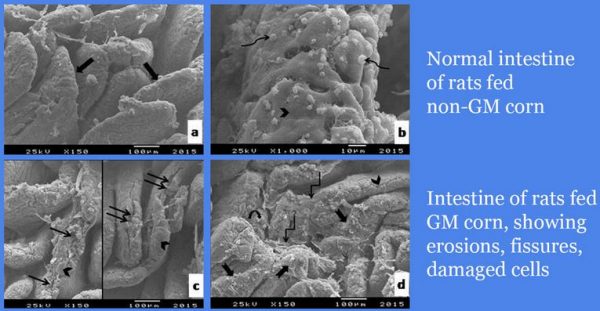 GM proponents who constantly drone on with untrue claims that the science has clearly demonstrated GMOs as safe were dealt yet another blow shortly before Thanksgiving this past year.

This is because yet another study has been published demonstrating the negative health effects of GMOs on the intestinal tract.

This study by Ibrahim and Okasha entitled “Effect of genetically modified corn on the jejunal mucosa of adult male albino rat.,” and published in the journal Experimental and Toxicologic Pathology has demonstrated that rats fed GM Bt corn MON810 for only 90 days did indeed suffer rather serious damage to the surface mucous membranes of the jejunum – which is part of the small intestine.

The specific type of corn fed to the rats was MON810: Ajeeb YG. This is a GM version of Ajeeb, which is a local species of corn grown in Egypt. The GM version was created by Monsanto for the Egyptian market.

The rats who were fed the GM corn were given the MON810 corn as 30% of their diet. The control group was given the same amount of non-GMO corn.

In the group fed GM corn, the finger-like structures in the intestine known as villi that absorbs nutrients from food were clearly damaged. They were both distorted and flattened and some cells were even joined together.

The study includes images and shows photographs of the damage. There were also signs of inflammation around the areas of damage in the form of white blood cell infiltration. The mucosal glands were disturbed and blood vessels were congested. There was also an increased level of shedding of mucosal cells, higher rates of division of cells lining the mucosal glands and larger numbers of mucous secreting goblet cells.

The damage to the GM-fed rats was so obvious, that the researchers concluded, “consumption of GM-corn profoundly alters the jejunal histological [microscopic] structure”

They also added that,

Results from the current study could show that in spite of the assuring reports on GM products, GM corn has profoundly altered the histological structure of the jejunal mucosa at many levels and revealed several alarming signs, as the proliferative and eroded hemorrhagic lesions in addition to several ultrastructural alterations described here for the first time for jejunum under GM corn influence.

The limitations of the study include the fact that the control group was not given the Ajeeb non-GM variety and there was no analysis in terms of the possibility of the presence of pesticide residues and other contaminants. Still, the findings of this new study are extremely significant in that they demonstrate that at best, GM MON810: Ajeeb YG causes damage to the intestinal system.

However, the results do seem to indicate that it is the process of genetic modification that is the cause of this damage. This is not the only study of its kind.

Two earlier rat feeding studies by Egyptian scientists on the same GM corn, MON810: Ajeeb YG, showed harm in the GM-fed animals. In these cases, the comparator was the appropriate non-GM parent variety Ajeeb, so the ill effects shown in the rats were due to the GM process.

In the first study, rats fed the MON810: Ajeeb YG for 45 and 91 days showed differences in organ and body weights and in blood biochemistry, compared with rats fed the non-GM Ajeeb parent variety grown side-by-side under the same conditions. The authors noted that the changes could indicate “potential adverse health/toxic effects”, which needed further investigation.[3]

In the second study, histopathological (microscopic) investigations by the same group of researchers found toxic effects in multiple organs in the rats fed the GM MON810: Ajeeb YG Bt corn for 91 days. Effects included abnormalities and fatty degeneration of liver cells, congestion of blood vessels in kidneys, and excessive growth and necrosis (death) of the intestinal villi. Examination of the testes revealed necrosis and desquamation (shedding) of the spermatogonial cells that are the foundation of sperm cells and thus of male fertility.[4]

It is significant that the findings of the second study, namely cell abnormalities, congestion of blood vessels, and damage to the intestinal villi were also found in the new study by Ibrahim and Okasha.

It should be noted, that in both of these studies the non-GM Ajeeb variety was used for the control group, thus demonstrating that the process of genetic modification is most likely the culprit for such damage. Likewise it should be noted that the rats showed now outward signs of illness (possibly due to the short duration of the study) but they were clearly sick.

Perhaps now we can begin putting to rest the disingenuous claims by GMO proponents that there are no studies showing the dangers of GMOs. As more and more studies are published demonstrating the danger of GMOs – corporations, governmental regulatory bodies and scientific call girls as well as the fake news media outlets that constantly tout the benefits of GMOs will continue to lose their credibility.

Brandon Turbeville – article archive here – is an author out of Florence, South Carolina. He is the author of six books, Codex Alimentarius — The End of Health Freedom, 7 Real Conspiracies, Five Sense Solutions and Dispatches From a Dissident, volume 1 and volume 2, The Road to Damascus: The Anglo-American Assault on Syria,and The Difference it Makes: 36 Reasons Why Hillary Clinton Should Never Be President. Turbeville has published over 850articles dealing on a wide variety of subjects including health, economics, government corruption, and civil liberties. Brandon Turbeville’s podcast Truth on The Tracks can be found every Monday night 9 pm EST at UCYTV. He is available for radio and TV interviews. Please contact activistpost (at) gmail.com.