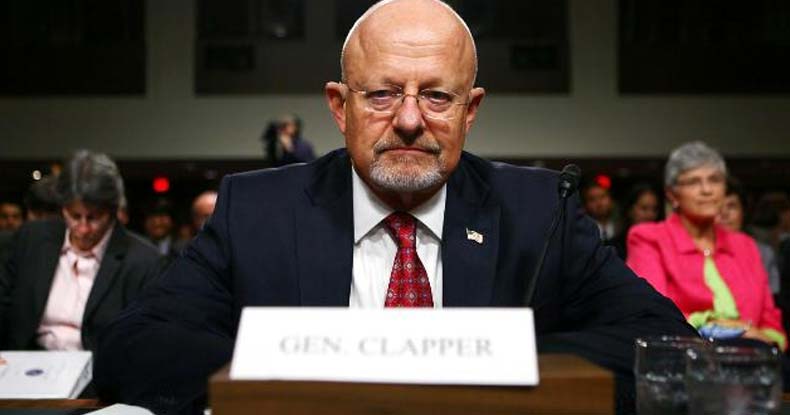 Outgoing Director of National Intelligence James Clapper told the Senate Armed Services Committee the campaign to sway the election in favor of Donald Trump did, in fact, involve Russian government-coordinated hacks, but,

“Hacking was only part of it. It also entailed classical propaganda, disinformation, and fake news.”

This heavy-handed and “multifaceted Russian campaign” attempted to undermine the United States, Clapper asserted, and — although these Russian hackers did not manage to infiltrate any voting machines or tamper with the vote count — there would be no way for the U.S. Intelligence Community to assess the total impact on the election. Stopping a hair’s breadth from calling this campaign an act of war, Clapper posited,

“Whether or not that constitutes an act of war. I think, is a very heavy policy call that I don’t think the intelligence community should make” — and then added, “It certainly — would carry, in my view, great gravity.”

NSA Director Adm. Mike Rogers and undersecretary of defense for intelligence, Marcel Lettre, also testified on reports of Russian interference in the election — but testimony by Clapper, and questions from the committee, eerily echoed sessions with Senator Joseph McCarthy during the first Red Scare in the 1950s.

Acknowledging the United States and other allies routinely engage in espionage, Clapper explained of Russia’s operation,

“I don’t think we’ve ever encountered a more aggressive or direct campaign to interfere in our election process than we’ve seen in this case.”

For all of this posturing about Russian meddling with computer systems of the Democratic National Committee and Hillary Clinton’s campaign chair John Podesta, among others, intelligence officials have not aligned behind the allegation — a fact which has garnered condemnation and outright ridicule.

Indeed, several current and former intelligence officials — as well as Wikileaks founder Julian Assange — have vehemently denigrated the theory documents provided to the publishing organization had been attained by hackers at all. Rather, agreeing with Assange no State actor forked over the damning documents, some in the intelligence community believe evidence points to a disgruntled insider.

To wit, Clapper’s testimony spoke to a report forthcoming next week, purported to evince the Russian campaign theory, but will only show the conclusions reached by the NSA, FBI, and CIA — not every agency said to comprise the entirety of the intelligence community.

“I think the public should know as much about this as possible,” he said of the report. “We will be as forthcoming as we can, but there are some sensitive and fragile sources and methods here.”

Clapper, the outgoing Obama administration, and the corporate press have conflated independent, right-leaning, and alternative media outlets with both Russian propaganda and Fake News — without evidence to back the claims — a tactic surmised by many to eschew blame for the lost election and distract from enmity and corruption revealed in the contents of the leaks.

Particularly targeted for reporting the truth by this anti-Russia propagandizing has been state-run outlet RT, about which Clapper contended,

“RT was very active in promoting a particular point of view, disparaging our system, our alleged hypocrisy about human rights, etc. Whatever crack, fissure they could find in our tapestry, they would exploit it.”

Of course, as a U.S. official, Clapper is duly obligated not to admit to governmental wrongdoing; however, his seething admonishment of RT and surreptitious allegation independent media outlets published only fake reports and purposely-slanted misinformation is not only wholly false, it dangerously portends a crackdown on America’s free press.

In fact, Clapper went so far as to call for a return to the official U.S. propaganda machine, the United States Information Agency, which churned out pro-American news items from 1953, during the fury of the Red Scare, through 1999, when it transformed into the Broadcasting Board of Governors.

“We could do with having a USIA on steroids to fight this information war a lot more aggressively than we’re doing right now,” Clapper ironically lamented, or perhaps addressing that Obama signed measures similar to the agency’s mission into law in the 2017 National Defense Authorization Act.

Notably, the intelligence director tellingly described the Russian interference as an “activist” effort to subvert American democracy — suggesting the press might not be the only target the government has in its sights.

But the fact the U.S. intelligence communities have painted truthful, accurate reporting by independent media with the broad Red Scare brush — simply because egregious nastiness revealed in authentic documents is too unpleasant to acknowledge — proves why the fictitious narrative of Fake News threatens dissent, itself.

“If you tell a lie big enough and keep repeating it, people will eventually come to believe it,” Joseph Goebbels, Adolf Hitler’s chief propagandist notoriously but accurately stated. “The lie can be maintained only for such time as the State can shield the people from the political, economic and/or military consequences of the lie. It thus becomes vitally important for the State to use all of its powers to repress dissent, for the truth is the mortal enemy of the lie, and thus by extension, the truth is the greatest enemy of the State.”