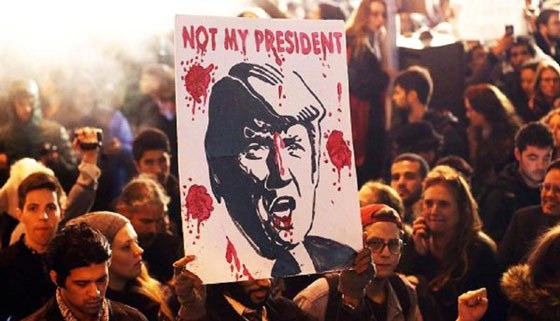 (INTELLIHUB) — A group of radical leftists that includes activists, entertainers, artists, professors, writers, and at least one known terrorist has launched what amounts to a sort of soft coup attempt in America with the release of a full page New York Times ad and accompanying website that lays out a concrete plan to prevent Donald Trump from ever taking office.

The website, refusefascism.org, makes it clear from the start that this is not about simply protesting Trump’s inauguration but rather about actually preventing him from being inaugurated to the office he rightfully won.

In other words, this is a direct attempt to steal the election from both Trump and the American people.

The homepage for the groups website starts out by shouting “Bring DC to a halt!” and “Millions in the street say no!” before laying out what they are actually calling for.

“Going into the Inauguration, flood the streets of Washington, DC with millions of people, determined to stay on the streets to stop the Trump-Pence regime before it starts,” the website reads.

“This starts January 14, the weekend of Martin Luther King Jr.’s birthday, and DOES NOT STOP till this regime is prevented from ruling. This is the kind of political crisis needed at this moment in history. It has happened before, and it can happen again,” it continues.

A quote on the sites sidebar fantasizes about what it would be like to stop the elected President of the United States from ever taking office.

“Imagine if people, in the tens of millions, filled the streets, powerfully declaring that this regime is illegitimate and demanding that it not be allowed to rule! The whole political landscape would be dramatically transformed, every faction within the established power structure would be forced to respond—and all this could well lead to a situation in which this fascist regime is actually prevented from ruling. This is not some idle dream but something which could be made a reality if all those who hate what is represented by this fascist regime translate their outrage into firm determination and massive mobilization to create the conditions which make this possible.”

Its one thing to call for massive protests that would then somehow lead to Trump being unable to take office. Having a plan for how that would actually happen is another thing altogether and this group seems to have that covered as well.

Startlingly, the plan not only includes massive protests, it also aims to cause so much of a problem that the “ruling elite” would then be forced to intervene against Trump. That’s right, this hard left and communist run sneak coup attempt is planning for the establishment to join them.

On the FAQ section of their website they describe, in great detail, how they plan to stop Donald Trump from ever becoming president.

“By the intersection of two things: first, massive protest and resistance from tens of millions of ordinary people, daring and determined to actually prevent this fascist regime from taking over and implementing its program, beginning more or less immediately and growing to a crescendo in the next few weeks, and through that creating “a crisis of rule”; and second, coupled with this, attempts by different factions in the established power structure which have real differences with Trump-Pence to solve the crisis by preventing them from taking the reins of power.

These protests could be something with the character of the protests against police murder over the past few years, or the Occupy protests before that—but larger by several orders of magnitude and even more determined. Such protests would have to have the effect of figuratively “stopping society in its tracks” and would raise real questions as to whether people very broadly would recognize the legitimacy of such a regime to even rule in basic ways and enforce its edicts.

The “not normal” character of Trump-Pence—the radical changes they embody in how people are to be ruled in this country (in short, the fascist ethos and measures they campaigned on) and in regard to U.S. international policy—have not only created tremendous anguish and anger among many millions of ordinary people, but among ruling factions which have up to now nevertheless chosen to go along with this. But should there be a political eruption “from below,” their concerns over Trump would combine with immediate questions as to whether their basic stability and perhaps even the entire system would be endangered by continuing to stick with Trump-Pence.

As that dynamic developed, scandals that up to now have been covered up could erupt, or be treated in a different way so as to raise fundamental constitutional issues, and ways would be found to prevent the coming to power of Trump-Pence.”

The group also has a planned full-scale propaganda effort that includes paying the mainstream media to run ads to promote their goal of stealing the election as well as a highly coordinated social media campaign aimed at the same.

Eventually they envision bringing Washington D.C. to a complete halt in the week leading up to the inauguration as well as new “Trump scandals” to magically erupt in the mainstream media.

Early this week, the call for this campaign will hit with tremendous impact via ads in major news outlets, in print and online, co-ordinated with massive and burgeoning social media efforts. Spokespeople will be made available to media in a concerted effort to get the word out and to involve as diverse a group of initiators and other possible spokespeople as possible in doing that. And with this, plans will be announced to “bring DC to a halt” in the week before the scheduled inauguration. Shortly after that we envision the growth of demonstrations and other forms of protest—including especially non-violent direct action disrupting business as usual, occupying public spaces, assemblies and meetings in institutions and workplaces, strikes, etc.—in cities across the country. As people see that there are many who feel like they do and, more than that, are determined and acting to do something about what would almost certainly be a horrific regime, they will themselves become inspired and compelled to join in these. This would have to quickly spread and find ways to overcome resistance and obstacles; but once people are aroused and acting on their highest aspirations, tremendous creativity and resources can become unlocked and things can spread like wildfire. While this is far from assured, historical experience shows that there is a reasonable chance that in the face of extreme provocation from the ruling powers, people can act in extraordinary ways.

As this develops, we envision public spaces being occupied in major cities and millions travelling to DC to protest the inauguration in the days leading up to it (and the millions in the DC and Baltimore areas who DID oppose Trump-Pence making resources and shelter available). This is a highly mobile and highly interknit society in which there is still relative freedom of movement and outlets for expression*; if such a thing could happen in a highly repressive and non-interlinked society like Egypt, it could certainly happen here.

As all this emerges and then comes to a head, we would expect that even further scandals around Trump would surface from various sources, that different sections of the population with different concerns would get drawn into this, and that the social will to stop Trump-Pence from ruling would emerge and the political/legal means to accomplish that would be found.

On first glance this may seem like more of the same – the endless petty attacks on Trump and his incoming presidency that have all so far failed. Sadly this does not seem to be the case here, especially when you consider who is actually behind this de facto coup attempt.

While more mainstream leftists such as Debra Messing and “Rosie” O’Donnell are leading the media charge for the group, its actual key members are much more important,with the list reading like a who’s who of the radical communist left.

Others listed on the website as responsible for the plan include:

For their part, the seemingly compliant mainstream media, which would have had a field day if a group of patriots like those in the standoff at the Bundy Ranch ever did something so coordinated and direct as this, has largely ignored this stunning call for election theft. When they have covered it, they have directly misconstrued what the ad in the Times was actually about.

For example, a Variety headline on this actual plan to stop the elected president from taking office called it, “an anti-Trump Fascist warning”. Add this to the fact that the media looks to be taking money from this group for their ads and you have at the very least tacit support from the establishment press.

The next three weeks are lining up to possibly be on a scale not seen in this country for decades and now we have known radical leftist provocateurs initiating a plan to steal the election.