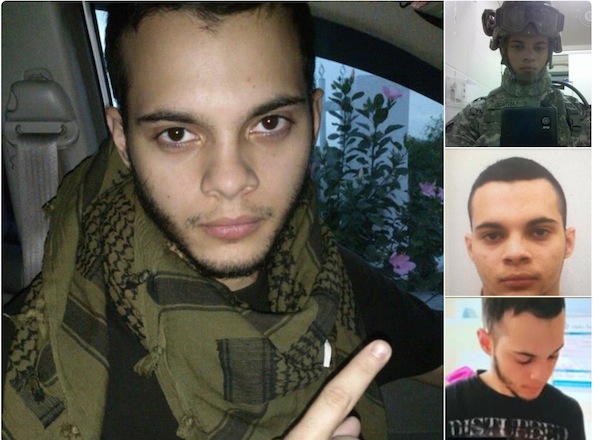 Ft Lauderdale shooter was posting on jihadi forums when he was 17 years old in 2007. That twitter account @Esteban00903 is now closed.

Law Enforcement sources told CBSNews that in Nov. 2016, he walked into an FBI office in Anchorage, AK claiming he was being forced to fight for ISIS.

The Fort Lauderdale gunman was known to FBI for four months prior to this massacre.

Fort Lauderdale-Hollywood International Airport has been shutdown after a shooting that left five people dead. Broward Sheriff’s deputies are working with the FBI, trying to figure a motive for the shooting.

Broward Commissioner Chip LaMarca told CBS4 the shooter was a passenger on a Canadian flight with a checked gun. He says the shooter claimed his bag at the baggage claim area then took the gun from his bag before going into a bathroom and loading his weapon. He then reportedly came out of the bathroom and began shooting people in the baggage claim area.

Air Canada took to Twitter to deny they had the accused gunman on the flight saying, “We confirm we have no record of a passenger by the name Esteban Santiago, or checked guns, on any of our flights to Fort Lauderdale.”

A law enforcement source identifies the accused shooter as Esteban Santiago Ruiz, 26, of New Jersey. Sources say he had a concealed weapons permit on him. The source added he had a minor criminal history.

Esteban Santiago Lived Within Walking Distance From Only Mosque in Alaska

Is ISIS Behind the Fort Lauderdale Airport Shooting?

Is the Islamic State the motivator for Esteban Santiago, the alleged gunman of today’s attack at the baggage claim area of the Fort Lauderdale-Hollywood airport in Florida?

CNN reports that 5 are dead with multiple others injured. John Cardillo, a radio host, reported that there may be multiple shooters. However, the Broward County mayor, Barbara Sharief, denied this.

Is it the Islamic State? As of now it is unconfirmed, but comparisons are being made of today’s attack to the summer 2016 attack on Ataturk Airport in Turkey. On June 28, three suicide bombers killed 45 people and injured more than 230. However, ISIS never officially claimed the attack, reports CNN.

It can also be noted that after today’s shooting, ISIS terrorist channels knew Esteban’s name before some news corporations reported it. A U.S. senator gave Esteban’s name out live on MSNBC. It is unclear if ISIS channels spread his name before MSNBC. Esteban is now in custody.

If claimed, the attack would be the second ISIS attack this year, with the first being the Reina Nightclub attack in Istanbul, Turkey. In that attack, a gunman, who was incorrectly stated to have been dressed as Santa Claus, armed with a long-barreled weapon, shot and killed a policeman and a civilian around 1:45 a.m. on January 1 before entering the club and opening fire, reports the New York Post. 39 people were killed.

Before that was the Christmas market attack that killed 12 and injured 48 at Breitscheidplatz in Berlin-Charlottenburg, Germany.

However, the last ISIS-affiliated attack in the United States occurred in November, when Somali refugee Abdul Razak Ali Artan drove a car into a group of people after pulling a fire alarm on a building.