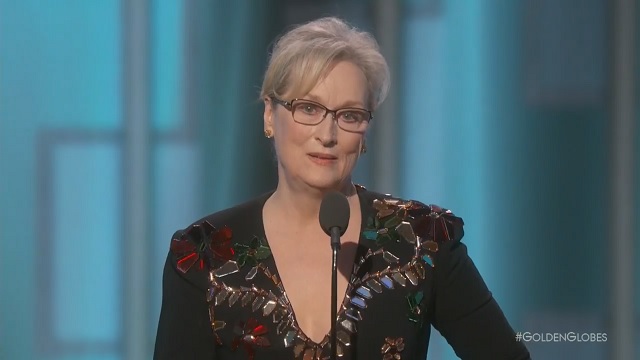 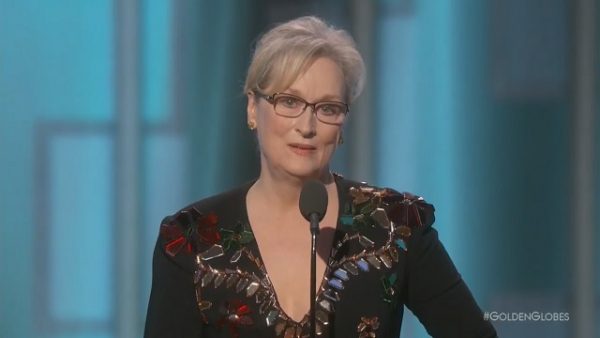 During her speech last night at the Golden Globes, Meryl Streep repeated the tired lie that Donald Trump mocked a reporter because of his disability.

“There was one performance this year that stunned me,” Streep said. “It sank its hooks in my heart. Not because it was good. There was nothing good about it. But it was effective and it did its job.”

She continued: “It made its intended audience laugh and show their teeth. It was that moment when the person asking to sit in the most respected seat in our country imitated a disabled reporter, someone he outranked in privilege, power, and the capacity to fight back. It kind of broke my heart when I saw it. I still can’t get it out of my head because it wasn’t in a movie. It was real life.”

“And this instinct to humiliate, when it’s modelled by someone in the public platform, by someone powerful, it filters down into everybody’s life, because it kind of gives permission for other people to do the same thing. Disrespect invites disrespect,” she said. “Violence incites violence. And when the powerful use their position to bully others, we all lose.

There’s just one problem: the story is a lie as Mark Dice explains below.

Speaking of the powerful using their position to bully others, how much condemnation did Streep heap on the four able-bodied black thugs who tortured a disabled white kid on Facebook Live last week?

Oh, she didn’t even mention it? How interesting.

Here’s Streep’s full speech where she says plainly: “Hollywood is crawling with outsiders and foreigners.”

I wonder if that has anything to do with their hatred of middle America? Streep’s concluded her speech by saying Hollywood and the lying press need to work together to undermine Donald Trump and thwart the will of the American people — so that the country may be run by outsiders.

News flash, lady: you already tried that and it failed.