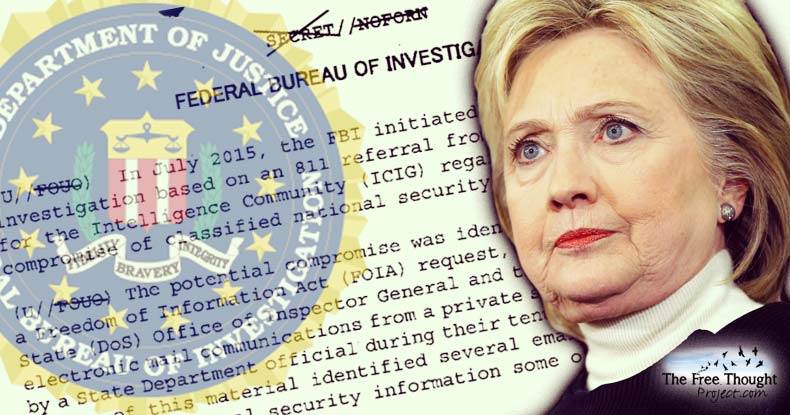 The Federal Bureau of Investigation has released a new batch of documents cataloging the investigation of Democratic Presidential Nominee Hillary Clinton. The documents were released Sunday on the bureau’s website, which has a page dedicated to the investigation of Hillary Clinton. WikiLeaks called attention to the release on their Twitter account with a link to a web archive listing showing the updated page. The FBI did not make an announcement related to the release.

The lack of comment by FBI officials has generated more questions than answers about the scale of the investigation into Clinton. The file is 299 pages and many of the documents are part of the basics of building a federal case including the preservation of records, evidence chain of custody, and listing many seized items.

The first document in the file is the initial report titled “Opening of Full Investigation on a Sensitive Investigative Matter (SIM),” which is dated July 10, 2015. It states the investigation is designated as a SIM because of the “connection to a current public official, political appointee or candidate,” which kept the status of the case out of the public domain.

The same report also lists the case as a prohibited investigation, which receives special classification for counterintelligence needs.

“Due to the extremely sensitive nature of this investigation and the damage its disclosure could cause, the case will be designated as a prohibited investigation in accordance with Counterintelligence Division Policy Implementation Guide,” the report states.

FBI’s Counterintelligence division requested the preservation of records for multiple lists of email accounts. One list included 422 redacted accounts and another listed 912 accounts. All of the requests are dated August 18, 2015.

On page 235 of the documents, the FBI admits the Office of Inspector General found classified materials on Clinton’s server. This means the FBI knew about this leak well before anything was made public — and while Clinton was publicly denying it the entire time. The files are also showing signs of details corroborating some pending theories about Hillary Clinton’s corruption scandals, as evidenced by internet forums. Conversation on Twitter has been continuous as users replied to the WikiLeaks tweet, and a lengthy Reddit thread featured many popular users citing specific facts from the documents.

The FBI’s timing in releasing the documents has been questioned as it comes just days after the full report ordered by U.S. President Barack Obama to investigate Russian influence on the election in favor of Donald Trump. The US government claimed Russian intelligence facilitated a hacker persona named Guccifer 2.0 to steal emails and documents from the Democratic National Committee. The emails were then published by WikiLeaks in July 2016, days before the DNC’s convention.

The claims of Russian responsibility for the hack have been heavily criticized by security experts in the US intelligence community. The original hacker Guccifer, whom the 2.0 moniker is referencing, has also dismissed the US government’s claims as ‘crazy’ in an interview last week.

‘Americans are crazy about the Russian thing and that Russians are invading the United States,’ Guccifer said regarding the Russian hacking claims. ‘It’s crazy … it’s this hysteria you know?’

WikiLeaks founder Julian Assange has repeatedly stated it was not Russian hackers who were responsible for the DNC leaks. Assange also hinted that it may have been murdered DNC staff member Seth Rich who leaked the documents.

American news media has used the claims of Russian responsibility to dismiss the importance of the information revealed by the email leaks which showed DNC officials favoring the campaign of Hillary Clinton over Bernie Sanders.

The scandal revealed detailed and continuous efforts by DNC officials to get Hillary Clinton selected as the nominee, the most controversial of which involved the DNC Chairwoman Debbie Wasserman-Schultz. Schultz was forced to resign the day before the convention began, and was immediately hired by the campaign of Hillary Clinton.

American news media has continued to claim that Russian efforts to influence voters was the cause of Hillary Clinton losing, but largely ignores the content of Hillary Clinton’s numerous scandals, even after the election ended. The result has been a campaign of anti-Russian sentiment which blames the political dysfunction in America on Russian agents, instead of the Democratic party officials who actually influenced the election in favor of Hillary Clinton.

Anti-Russian sentiment escalated in November after the collective claims of American news media that websites publishing “fake news” were largely responsible for the change in public opinion about Hillary Clinton, which they claim benefitted the campaign of President Donald Trump. The Free Thought Project was named on the list referenced, however, the list has since been largely discredited. The fake news campaign was recently punctuated by the provision meant to “counter propaganda and disinformation directed at the United States,” which was embedded in the new National Defense Authorization Act (NDAA).

The fake news campaign has also led to the censorship of alternative media organizations, who have had a significant part in spreading information about corruption such as the DNC sabotage of Bernie Sanders and the various scandals surrounding Hillary Clinton. The Free Thought Project has continuously reported on how American news media has used their own fake news stories to create anti-Russian sentiment, and even profits off of it prior to retractions forced by the facts.