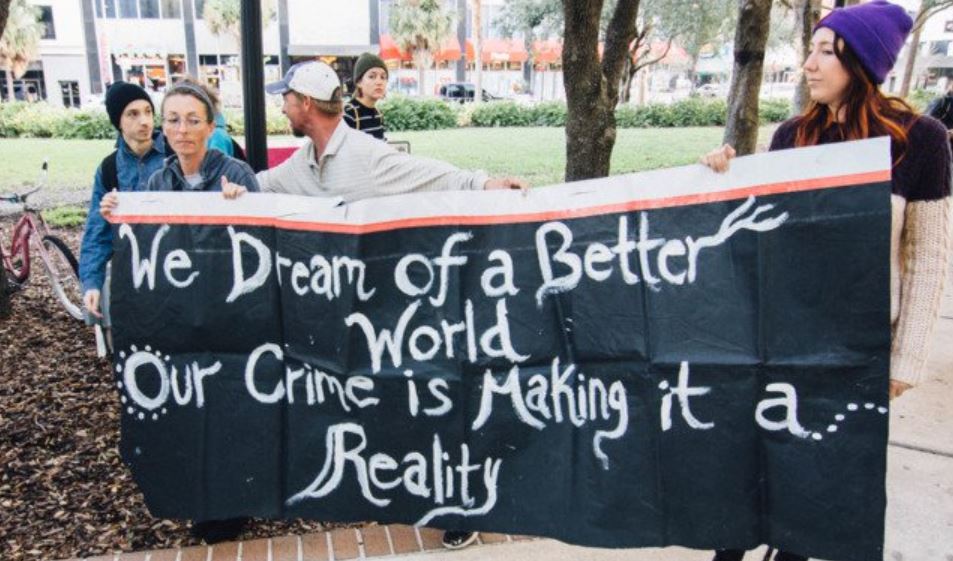 Tampa, FL — When feeding willing hungry people becomes illegal, that is a telling sign of a bureaucratic police state. And, in the ostensible Land of the Free, the enforcers of such arbitrary and cruel laws have no problem kidnapping and locking people in a cage for helping those in need. In fact, it happens on a regular basis.

The most recent case of police cracking down on caring people who dared to give organic rice and beans to the hungry happened over the weekend in Tampa.

Members of the charitable group Food Not Bombs gathered Saturday afternoon to hand out hot coffee and bagels to Tampa’s homeless community. However, their good deed was thwarted by police who quickly arrested seven of the people serving the food and one homeless man who dared grab a bagel from the table after cops ordered everyone to stop eating.

The entire horrendous deprivation of liberty was streamed live to Facebook by Erin Sauer. It’s nothing short of infuriatingly asinine.

Why would a dozen cops descend on a group of volunteers donating their own food to willing people who need it? Well, Food not Bombs failed to pay the extortion fee to the city in the form of a permit.

Food not Bombs is not some fly by night charity looking to rustle feathers by ‘illegally’ distributing food the homeless. The group sets up to feed the homeless at least twice a week — so obtaining a permit and purchasing the city-required insurance policy is too pricey to be sustainable.

When kind-hearted people don’t have a limitless supply of money to grease the statist skids and pay their extortion fees to remove all the red tape — they become outlaws.

The good news is that the group is made up of brave people who are unafraid to disobey unjust laws. In an email to CL Tampa, a spokesperson for the group noted that Food not Bombs “has no plans to stop sharing food with the homeless and hungry and will continue to defy unjust laws that criminalize compassion and mutual aid.”

Unfortunately, in the land of the free, feeding the homeless has become a revolutionary act. Cities across the country are cracking down on good people like those at Food not Bombs who simply want to feed the needy.

Last December, the Dallas, Texas city council enacted Ordinance No. 29595, which makes it illegal to serve food to the homeless without jumping through a statist myriad of bureaucratic hoops, including a fee, training classes, and written notices.

However, the folks over at the aptly named organization Don’t Comply acted in a similarly brave manner as Food not Bombs, and took to the streets just outside the Austin Street Shelter in Dallas. However, the members of Don’t Comply had guns. They were not shut down and the group successfully fed thousands of homeless people.

“We intend to expose the city’s cruelty in the face of thousands in our community who are struggling with issues of food insecurity, mental and medical health issues, poverty, and homelessness,” a spokesperson for Food not Bombs said in an email according to CL Tampa. “If the city will not address these problems, the least they can do is not get in the way and stop others from addressing these needs. Compassion should never be criminalized.