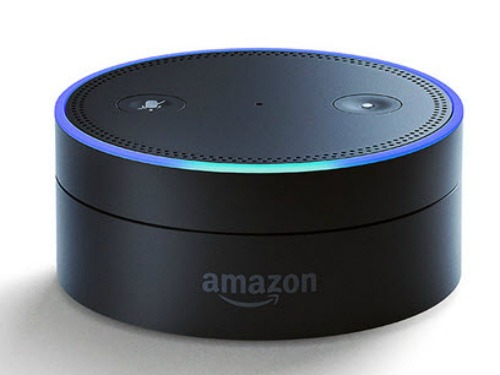 We are living in such a bizarre Orwellian world.

This Christmas, Amazon raked in the lion’s share of all online sales, blowing away real-world competition by leaps and bounds. And the company’s number one bestseller? The Amazon Echo and Echo Dot.

There’s a reason Bilderberg Group attendee Jeff Bezos’ cute little voice-activated gizmos have been priced so extremely cheaply… to get them into as many houses as possible as quickly as possible. No one has been able to explain to me how these aren’t creepy big brother spy devices to get sheeple (who have been conveniently programmed by watching years of Jetsons cartoons as a kid to think anything futuristic is cool with no potential drawbacks) on the smart grid Internet of Things… no matter how obvious the Orwellian nightmare warning signs are.

Recently it came out that police can retrieve the voice data from anyone’s Echo. And if people honestly believe that thing is only recording voice commands and not every ambient conversation or even sound happening within range, then I’m going to have to go get a thesaurus because the words gullible and naïve just simply aren’t going to cut it here.

Now it has come out that Alexa, the Amazon voice assistant that “lives” inside the Echo, is ordering stuff people didn’t even want.

Recently six-year-old Dallas resident Brooke Neitzel asked Alexa the super vague, “Can you play dollhouse with me and get me a dollhouse?” so Alexa didn’t just order the Neitzel’s a dollhouse, it ordered them a $170 KidKraft Sparkle mansion dollhouse, along with four pounds of sugar cookies (which the kid also admittedly “talked to Alexa” about). Alexa apparently has expensive taste, go figure.

Great. So they paid to place a low-level AI in their house that they are now forced to whisper around? No, that doesn’t sound creepy at all.

But also, why would they honestly think whispering will cut it?

That’s not all, however; no, that’s not even the most alarming part.

When a local San Diego station did a news report on this and the station’s anchor said the phrase “I love the little girl, saying ‘Alexa ordered me a dollhouse,’” on air, it triggered San Diego viewers’ Amazon Echoes to buy them dollhouses too… apparently without the Echo owner personally saying a word. People were calling up the station to complain about it.

Welcome to the future. If things are already this screwed up, I think I’ll take a pass on those flying cars, thanks.