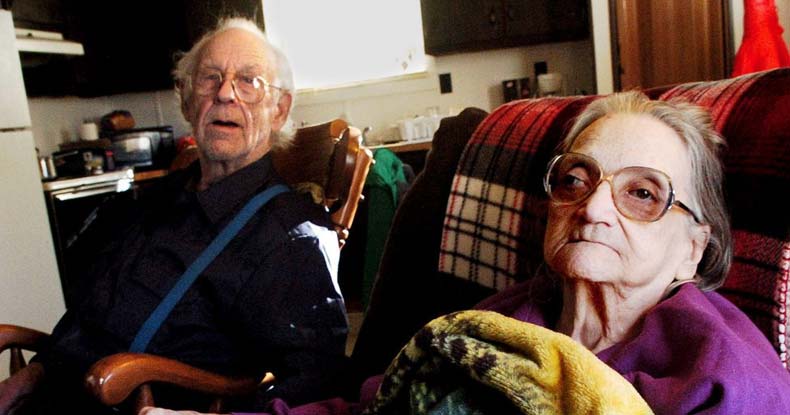 Albion, ME — Maine Governor Paul LePage wants to rewrite the law after becoming incensed at the plight of an elderly, disabled couple — one of whom is a veteran — who were evicted from their home of 33 years because they are too impoverished to pay taxes.

According to the Portland Press Herald, in December 2015, the town of Albion moved to foreclose on the “rundown camp” of National Guard and Marine veteran Richard Sukeforth and his wife, Leonette, when taxes went unpaid.

Then, the town put the couple’s home up for auction — it sold for just $6,500 — and the new owner, Jason Marks, kicked the two 80-year-olds to the curb last week.

LePage is irate — and wants to ensure this can never happen again.

“He’s living in poverty,” he said of Richard in an interview with the Morning Sentinel. “Now, we’re throwing him out on the street. That’s just awful.”

“I’m livid about it,” LePage asserted of the ‘legal’ but seemingly unscrupulous eviction, “and I think we have to have laws to protect our most vulnerable.”

LePage appealed to nonprofit Pine Tree Legal — an advocacy group providing free legal advice for Maine residents with limited income — but, it turns out, the eviction followed the letter of the law.

As the Sentinel reports,

“LePage said he thinks it is immoral that a veteran and his sick, bedridden wife, who are at the end of their lives, were kicked out of their home and he is going to fight to ensure the practice is prohibited in the future.”

As he explained in the interview,

“I’m going to ask for an ombudsman to mediate disputes between communities and taxpayers, not just elderly. I want to change the foreclosure law as it relates to poverty, and one of the things I want to do is force them (communities) to sell property at market value and any revenues above taxes and revenue and foreclosure fees go back to the original owner.”

Typically, Maine communities work with disadvantaged citizens to solve tax difficulties — through tax abatement and reverse mortgages, for example — in order to avoid evictions like the Sukeforths experienced.

“As mayor of Waterville,” LePage explained of his position prior to becoming governor of Maine, “whenever we had an issue of poverty, we never threw people out.”

While the town of Albion indeed followed the law, as far as morals are concerned, LePage remarked, “What they did is unbelievable. It’s just not the way it’s done.”

Before the Sukeforths were evicted from property, located on Lovejoy Pond, Leonette — a retired nurse with diabetes — had been confined to a hospital bed under doctor’s orders. Now, the elderly pair has been forced to live with daughter, Yvette Ingalls, in a trailer park in Holden, where a nurse attends Leonette on a daily basis.

According to the Sentinel, daughter-in-law Rachel Sukeforth and son Rick had to essentially rescue the ailing couple in the middle of a snowstorm on the night the new owner kicked them off the property. They’ve had to temporarily house the couple’s beloved Jack Russell terrier and black cat since the trailer park does not allow dogs.

Richard questions the morality of the eviction, telling the outlet in a phone interview,

“That deal was very underhanded. I don’t care what anybody says. It weren’t right. They came down and evicted us when my wife was right in a hospital bed. We’re both 80 years old, so they done it and got away with it and they’re happy.”

An attorney for LePage attempted to negotiate with Marks, the new owner, but was told it would have to take place in his own lawyer’s office with his attorney present. LePage says he prefers to combat corruption as directly as possible, and did not want attorneys involved in such a discussion.

“I never meet with lawyers,” he explained, adding he’d planned to ask Marks to allow the Sukeforths to live out their lives on the property they’d inhabited for over three decades. “When I ask for a meeting, it’s me, alone. When I go after corruption, I go after corruption head-on. I don’t need any help.”

Marks agreed to allow the Sukeforths to continue to reside at the camp as long as they paid rent — but says they never did. He explained he had no choice but to force them out, and is being unfairly portrayed as the bad guy in this controversy.

Town officials stand by the eviction — saying they attempted to work with Richard for several years and that the back taxes were minimal. Albion Selectwoman Beverly Bradstreet owed $4,000 in property taxes for the dilapidated building and the land more accurately described as a camp.

“It’s three years before we foreclose, and we paid his taxes, like two different years to avoid foreclosure,” Bradstreet told the Sentinel, “but then he just let it go. He knew that we were going to do it. He would come in the Town Office, but he did not pay. I don’t know why. He just waited until it was too late. We foreclosed last December, 2015. We gave him six months to still pay it off and he made no effort to pay it off. He didn’t try, and there were other people in town that could use some help, too.”

While that seems a justifiable reason for the town to act, Rachel says no one in the Sukeforth family was aware her father-in-law — who has begun to suffer from dementia — had failed to pay. In fact, when asked, the veteran had affirmed he’d visited the Town Office and paid the bill.

A notice printed in a local paper announcing the auction of the property first alerted family members to the dubious situation.

“As soon as we found this out, we called the Town Office,” Rachel told the Sentinel. “My husband and siblings and our neighbor all tried to pay the taxes up to date, and they refused payment. This wasn’t sitting well with any one of us. Every town has the right to refuse payment, but can also accept the payment as well. When we tried to pay selectmen, they said when an auction is posted in the newspaper, they can no longer accept payment, but that wasn’t true.”

That refusal to accept payment from other parties doesn’t sit well with the family and concerned neighbors — nor does it with the governor.

“It’s never too late until the deed transfers, and the deed had not transferred,” said LePage, who has even offered to take the couple’s dog, Pee-wee, if they are unable to have the canine designated as a service animal to allow the dog to reside the trailer park.

“Richard Sukeforth said he and his wife receive $1,252 a month in Social Security payments. He worked in construction during the summer for many years, operated a snowplow for the Maine Turnpike in winter and later worked for Bath Iron Works until he was injured when he fell off a crane boom in 1982, he said,” the Sentinel reports.

Neighbors, family, and friends took umbrage at the seemingly callous eviction of such a frail and kind family from the property they loved — particularly given Richard’s mental state and that several people tried in vain to make good on the taxes owed.

“He is a … vet. There’s just so many reasons this shouldn’t be able to happen,” said part-time neighbor MaryAnn Sawlan-Neiman, who alerted the governor to the tragic situation after exhausting all other options.

“Every day, he would come down, stay a couple of hours, and I’d go to his house,” Sawlan-Neiman said of Richard. “We just became really good friends. Another neighbor told me in July they were going to foreclose for taxes. I went to the town hall and I said, ‘What does he owe? I’ll pay for it right now.’”

But by that time, Albion officials said, the public announcement meant the tax bill could not be addressed by anyone — and the town refused to work with even Governor LePage, himself, to halt the eviction.

“It’s just devastating for them,” lamented Sawlan-Neiman of the Sukeforths, adding, of Richard, “He’s just like a lost man now.”

And there you have it. A couple, who owed no one anything, had their home stolen from them by government because they failed to pay the state an extortion fee for their right to live — and we still call this place the Land of the Free.