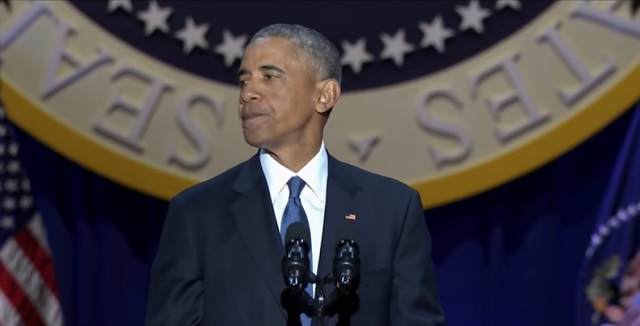 Barack Obama took one last parting shot at “white people” during his farewell address on Tuesday.

He dedicated around a third of his speech to addressing the deterioration of race relations, though he insisted everything is just fine.

As every other sentence was a lie, I’ve broken it down piece by piece.

From The New York Times’ transcript:

OBAMA: There’s a second threat to our democracy. And this one is as old as our nation itself.

After my election there was talk of a post-racial America. And such a vision, however well intended, was never realistic. Race remains a potent and often divisive force in our society.

Now I’ve lived long enough to know that race relations are better than they were 10 or 20 or 30 years ago, no matter what some folks say.

Also, no matter what the data shows. You can see it not just in statistics. You see it in the attitudes of young Americans across the political spectrum. But we’re not where we need to be. And all of us have more work to do.

If every economic issue is framed as a struggle between a hardworking white middle class and an undeserving minority, then workers of all shades are going to be left fighting for scraps while the wealthy withdraw further into their private enclaves.

Indeed, every economic issue must instead be framed as oppressive, greedy, stingy, selfish white people holding people of color down, as Obama does in this speech.

If we’re unwilling to invest in the children of immigrants, just because they don’t look like us, we will diminish the prospects of our own children — because those brown kids will represent a larger and larger share of America’s workforce.

And we have shown that our economy doesn’t have to be a zero-sum game. Last year, incomes rose for all races, all age groups, for men and for women.

The incomes of white working class men haven’t risen since 1996.

So if we’re going to be serious about race going forward, we need to uphold laws against discrimination — in hiring, and in housing, and in education, and in the criminal justice system.

That is what our Constitution and highest ideals require.

But laws alone won’t be enough. Hearts must change. It won’t change overnight. Social attitudes oftentimes take generations to change. But if our democracy is to work the way it should in this increasingly diverse nation, then each one of us need to try to heed the advice of a great character in American fiction, Atticus Finch, who said “You never really understand a person until you consider things from his point of view, until you climb into his skin and walk around in it.”

For blacks and other minority groups, that means tying our own very real struggles for justice to the challenges that a lot of people in this country face. Not only the refugee or the immigrant or the rural poor or the transgender American, but also the middle-aged white guy who from the outside may seem like he’s got all the advantages, but has seen his world upended by economic, and cultural, and technological change.

We have to pay attention and listen.

Note how he portrays “blacks and other minority groups” exclusively as victims and never as victimizers.

That goes against everything we know from crime statistics. For white Americans, it means acknowledging that the effects of slavery and Jim Crow didn’t suddenly vanish in the ’60s; that when minority groups voice discontent, they’re not just engaging in reverse racism or practicing political correctness; when they wage peaceful protest, they’re not demanding special treatment, but the equal treatment that our founders promised.

Great, then why aren’t you calling for the repeal of all affirmative action laws, diversity quotas and so-called “anti-discrimination” laws?

To say “they’re not demanding special treatment, but the equal treatment that our founders promised” is a flat out lie.

First off, the founders owned slaves.

Second, affirmative action is not equal treatment, it’s special treatment which comes at the expense of others.

For native-born Americans, it means reminding ourselves that the stereotypes about immigrants today were said, almost word for word, about the Irish, and Italians, and Poles, who it was said were going to destroy the fundamental character of America. And as it turned out, America wasn’t weakened by the presence of these newcomers; these newcomers embraced this nation’s creed, and this nation was strengthened.

That’s arguable, and I say that as someone who is part Irish. Regardless, the Somalis imported to Minneapolis are not making any of the same strides as the Irish.

So regardless of the station we occupy; we all have to try harder; we all have to start with the premise that each of our fellow citizens loves this country just as much as we do; that they value hard work and family just like we do; that their children are just as curious and hopeful and worthy of love as our own. And that’s not easy to do. For too many of us it’s become safer to retreat into our own bubbles, whether in our neighborhoods, or on college campuses, or places of worship, or especially our social media feeds, surrounded by people who look like us and share the same political outlook and never challenge our assumptions. In the rise of naked partisanship and increasing economic and regional stratification, the splintering of our media into a channel for every taste, all this makes this great sorting seem natural, even inevitable.

Only 58% of white people voted for Donald Trump. They’re actually the most split of any voting block.

And increasingly we become so secure in our bubbles that we start accepting only information, whether it’s true or not, that fits our opinions, instead of basing our opinions on the evidence that is out there.

And this trend represents a third threat to our democracy. Look, politics is a battle of ideas. That’s how our democracy was designed. In the course of a healthy debate, we prioritize different goals, and the different means of reaching them. But without some common baseline of facts, without a willingness to admit new information and concede that your opponent might be making a fair point, and that science and reason matter, then we’re going to keep talking past each other and we’ll make common ground and compromise impossible.

The evidence shows the whole Black Lives Matter movement is based on total lies, yet you pushed it to the point that the homicide rate in Chicago is the highest it’s been in 19 years. Similar has happened in other major cities.