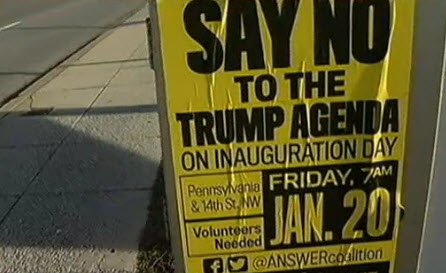 Well, it’s that time again America! Time to inaugurate another face for the shadow government that runs our country.

For the massive Women’s March on Washington, scheduled the day after Trump’s inauguration, it’s being reported that three times more bus permits have been requested for the protest than for the inauguration itself.

Protesting is everyone’s naturally inherent right, enshrined in this country by our Bill of Rights. On this point, hopefully we all agree here.

With that being said, however, where it goes south is the fact that color revolution starters like billionaire George Soros have been known to pay and bus in agent provocateurs to protests like these to take things well out of protest territory and into riots in the street with private property getting burned down and martial law declared coup territory. Soros not only helped fund what turned into the Ferguson riots after the highly publicized Michael Brown shooting, but new Soros front groups have already been tied to anti-Trump protests (protests which at times turned violent) during the election.

What’s more, we’ve already seen police stand down and seemingly allow Trump supporters to be beaten bloody in the streets.

Warnings like this one here have been coming out of the alt media for weeks, with claims that the radical left are planning to turn Trump’s inauguration into one of the biggest riots in American history.

On the other side of the aisle, the liberal establishment media are actually promoting the protests, which should otherwise seem odd. Referring to it as “The Anti-Inauguration,” Bildberberg Group attendee The New York Times published an op-ed that read like a nationwide Christmas party invite:

The inauguration of Donald Trump as the 45th president of the United States is just two weeks away, so now is the time to begin making plans to send him the strongest possible signal that your opposition to the presidency he has foreshadowed will not be pouting and passive, but active and animated.

Now is the time to begin making your plans for the anti-inauguration.

Can anyone recall the outlet promoting anti-Obama protests back in 2009 like this (or at all)?

Copious Tweeters are threatening it’ll be like The Purge — a fiction (thankfully so far anyway) film where the rule of law and emergency services are suspended for 12 hours so Americans can go on a guilt-free violence and murder spree one night a year.

Can you imagine under the current political climate if that were actually the case, just by the way? Holy sh*t.

Stars like Rosie O’Donnell are even openly calling for martial law to stop Trump from being sworn in.

Meanwhile, coinciding with Trump’s swearing in, Obama has begun amassing troops on Russia’s border like he wants to start World War III last minute right at the very end.

It certainly seems like the rhetoric is ramping up everywhere that something big is going down on or around January 20, 2017.

No matter what happens, it would seem next Friday (and the next four years) are set to be pretty interesting to say the least.

Here is a comprehensive list of protests, broken down by state and starting with the biggest one (via DiningwithDana.net):

Others in Washington DC