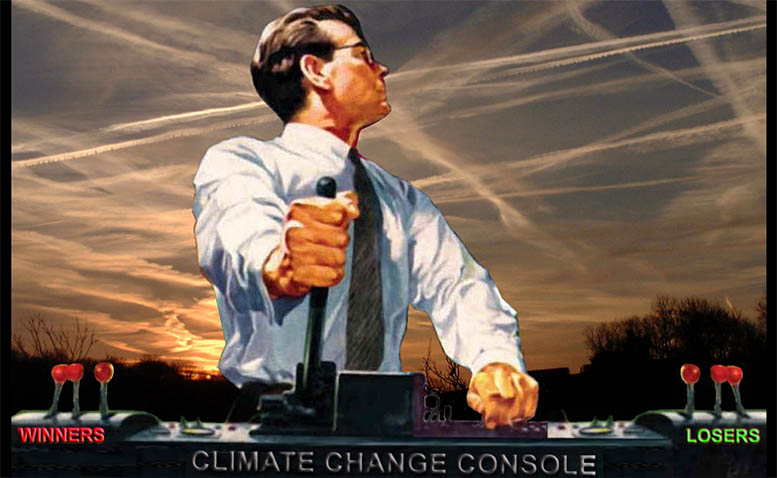 Earlier this month the U.S. Global Change Research Program quietly recommended new studies looking into two specific areas of research involving the controversial technology known as geoengineering. The GCRP involves thirteen different federal departments and agencies. The program was created by a presidential initiative in 1989 and became law as part of the Global Change Research Act of 1990. The law called for new research to help “assist the Nation and the world to understand, assess, predict, and respond to human-induced and natural processes of global change.”

In their efforts to combat the alleged effects of man-made climate change, the scientific community funds research into a variety of fields. Geoengineering is a controversial type of weather modification which has been researched, but, until recently, been considered too unpredictable to attempt on a large scale. Now the GCRP has released a new report detailing the path of research into climate change, including new research on geoengineering.

According to a 2013 congressional report:

In general, geoengineering technologies are categorized as either a carbon dioxide removal (CDR) method or a solar radiation management (SRM) (or albedo-modification) method. CDR methods address the warming effects of greenhouse gases by removing carbon dioxide (CO2) from the atmosphere. CDR methods include ocean fertilization, and carbon capture and sequestration. SRM methods address climate change by increasing the reflectivity of the Earth’s atmosphere or surface.Aerosol injection and space-based reflectors are examples of SRM methods. SRM methods do not remove greenhouse gases from the atmosphere, but can be deployed faster with relatively immediate global cooling results compared to CDR methods.

With the release of their report the GCRP have become the first scientists in the federal government to formally recommend studies involving geoengineering. In the entire 119-page report, the term geoengineering is only mentioned in two paragraphs, but those two paragraphs have the potential to shift thinking in the scientific community in favor of geoengineering research.

“The move will likely further normalize discussion of deliberate tinkering with the atmosphere to cool the planet, and of directly collecting carbon from the sky, both topics once verboten in the climate science community,” Science Mag reports.

The GCRP plan calls for new research into carbon removal and albedo (or SRM) modification. would provide “insight into the science needed to understand potential pathways for climate intervention or geoengineering and the possible consequences of any such measures, both intended and unintended.” The report calls on the research community to evaluate the consequences of geoengineering and “define the smallest scale of intervention experiments that would yield meaningful scientific understanding.”

The new plan marks the first time since 2009 that the Obama administration ventured into the controversial territory of geoengineering. In 2009, White House science adviser John Holdren mentioned possible geoengineering research leading to questions and fears over whether the White House was “considering” geoengineering or not. Since that time most federal researchers have stayed out of the topic. The CIA, however, is another situation altogether.

In 2016, CIA Director John Brennan gave a speech where he specifically mentions a type of SRM geoengineering known as stratospheric aerosol injection, or SAI. As Brennan noted, SAI is “a method of seeding the stratosphere with particles that can help reflect the sun’s heat, in much the same way that volcanic eruptions do.” Brennan went on to claim that an SAI geoengineering program could limit global temperature increases, a claim that has been disputed in several studies.

Most recently, in late October 2016, the United Nations’ Convention on Biological Diversity released a report examining the problems of geoengineering and whether or not humanity will be forced to employ the practice in an attempt to halt climate change. The report, Update On Climate Geoengineering In relation to the Convention on Biological Diversity: Potential Impacts and Regulatory Framework, found that geoengineering “would reduce the impacts of climate change on biodiversity at the global level,” but also cause unpredictable rain and temperature distribution on the local level.

The U.N. report states that the effectiveness of geoengineering is “uncertain” and “in reducing the scale of one problem, other new problems would be created. Thus, there would also be risk of the geoengineering action also contributing to other drivers affecting biodiversity loss and ecosystem integrity.” Dr. Phillip Williamson, lead author of the report and scientist with the Natural Environment Research Council in the United Kingdom, says he is skeptical of geoengineering.

The U.N. concludes that although SRM may possibly slow the loss of Arctic sea ice, but not without “unacceptable climatic impacts elsewhere.” One particular method of SRM involves injecting aerosols into the atmosphere via airplanes. The study found that the use of sulphur aerosols for SRM would be associated with a risk of stratospheric ozone loss. There is also a risk that stratospheric aerosol injection (SAI) would have a small impact on climate change but could lead to negative impacts on biodiversity. This fact seems to be ignored by Brennan and others who push geoengineering as a solution.

This, however, was not the only study to find problems with geoengineering.

In 2016 Activist Post reported on an analysis released by the Finnish Meteorological Institute, the government agency responsible for reporting weather data and forecasts in Finland. The Institute’s study, “Modelling radiative and climate effects of aerosols: from Anthropogenic emissions to geoengineering,” examined the potential for SRM to combat climate change. The study specifically looked at two types of SRM. The first involved marine aerosol concentrations use to increase clouds, while the second looked at increasing the amount of sulphur concentrated in the stratosphere.

In February 2015, an international committee of scientists released a report stating that geoengineering techniques are not a viable alternative to reducing greenhouse gas emissions to combat the effects of climate change. The committee report called for further research and understanding of various geoengineering techniques, including carbon dioxide removal schemes and solar-radiation management before implementation.

The scientists found that SRM techniques are likely to present “serious known and possible unknown environmental, social, and political risks, including the possibility of being deployed unilaterally.” The report was sponsored by the National Academy of Sciences, the U.S. intelligence community, NASA, National Oceanic and Atmospheric Administration, and the U.S. Department of Energy.

According to a 2013 study published in the Journal of Geophysical Research: Atmospheres, if geoengineering programs were started and then suddenly halted, the planet could see an immediate rise in temperatures, particularly over land. The study, titled, “The Impact of Abrupt Suspension of Solar Radiation Management,” seems to indicate that once geoengineering begins, the programs cannot be suspended without causing the very problem the engineering was intended to solve.

The problems associated with geoengineering are extensive. Why is it being promoted as a solution?