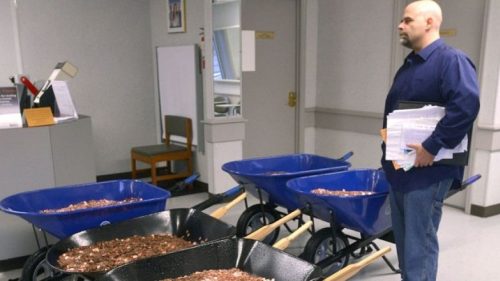 On Wednesday, a Virginia man livened things up at everyone’s favorite place to spend the day – the Department of Motor Vehicles.

Stafford’s version of the story goes like this: Back in September, he wanted to know which of his four houses spanning two Virginia counties he should list when licensing his son’s new Corvette. He attempted to call the Lebanon DMV, but was routed to a call center in Richmond.

He then submitted a FOIA request — a submission under the Freedom of Information Act that citizens, journalists and others can use to obtain public government information — to get a direct number to the Lebanon DMV, which he was provided. Some information is exempted from FOIA: documents about trade secrets and national defense, for example.

When Stafford called the number he was given, he said the employees at the DMV told him the phone line wasn’t meant for public use. However, Stafford said after repeated phone calls, the DMV eventually answered his licensing question.

Stafford then decided he wanted the direct phone numbers for nine other DMV locations in the area, but the Lebanon employees would not give them to him.

So, Stafford went to court to get them:

On Tuesday, a judge dismissed the lawsuits, and a representative of the state’s attorney general gave Stafford a list of the requested phone numbers in the courtroom.

But this wasn’t really about getting that list, as Stafford explained:

“The phone numbers are irrelevant to me. I don’t need them. I told the judge ‘I think I proved my point here.’

I think the backbone to our republic and our democracy is open government and transparency in government and it shocks me that a lot of people don’t know the power of FOIA.”

Stafford concluded his protest with a bold final act…

Stafford paid 11 people a total of $440 to remove the pennies from their rolls with hammers.

Then he spent $400 on the wheelbarrows he used to cart the 1,600 pounds of pennies to the DMV.

Stafford says he owed the DMV $2,987.14 in sales tax after purchasing two new SUVs with cash.