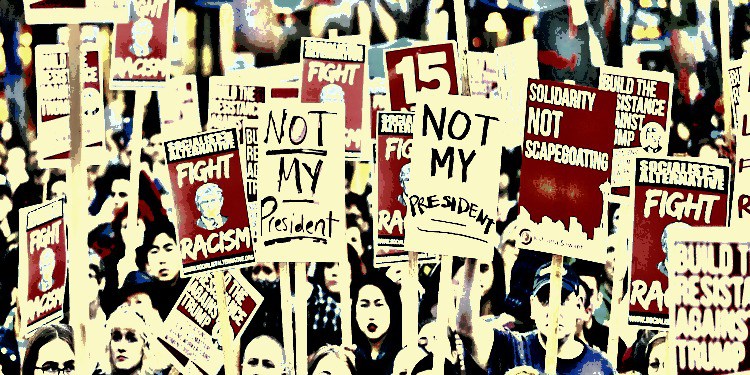 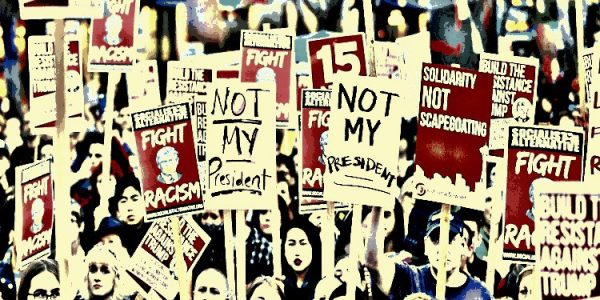 Remember how I’ve been saying that massive civil unrest is coming with the inauguration?

The noisy anti-Trump faction is getting organized to do everything they can to take down his presidency.

We are looking at a massive organized protest the likes of which this country has never seen before, all because a bunch of liberals didn’t get their way. All because people who do NOT live in New York City and Los Angeles wanted a change.

Along with the media, they’ve fanned the flames of fear to try and delegitimize Trump’s presidency, even though this was the will of most of the geographic United States. Even though it was supported by the Electoral College vote. Even though it was backed up by Congress. This is a sociological phenomenon that has been heightened by the most effective mass brainwashing I’ve ever seen.

Initially, they were just disgruntled folks who backed the losing horse. Now, they’re turning into an enraged mob that refuses to accept the results of the election.

Protesters are publicly organizing a week of chaos leading up to the inauguration of President-Elect Donald Trump.

A group calling themselves Refuse Fascism seems to be inciting civil unrest:

In The Name of Humanity, Refuse to Accept a Fascist America

STOP THE TRUMP-PENCE REGIME BEFORE IT STARTS

Take to the Streets

March to the Halls of Power

every day and every night

Then: Becoming ten and a hundred thousand

Grow each day to become millions across the country

Join us and make history.

Bring your signs, your friends, your love and your righteous anger.

With courage, conviction, and deep determination we won’t stop.

In the name of humanity, our aim is nothing less than preventing a Trump-Pence Fascist Regime

If you can’t come to DC, do it where you are – same time, same idea, going night after night and refusing to get out of the streets. Stop this fascist regime – BEFORE it starts.

The Washington Post, always the epitome of responsible journalism, published on Friday a list of protests that will be taking place. They called the article “Your guide to inauguration demonstrations, marches, and protests.”

Another group, DisruptJ20, also seems intent on causing as much trouble as humanly possible on Inauguration Day. They have published a comprehensive list of “events” that will be taking place on January 20.

Perhaps the biggest event will be the Million Woman March, promoted by Michael Moore. (You have no idea how to squelch a rather rude comment about Moore’s manhood right now.) The director has announced 100 Days of Resistance against Trump.

In an appearance, this weekend on MSNBC’s The Last Word, the 62-year-old Trumpland and Fahrenheit 9/11 director made a “call to arms” to those opposed to Trump’s presidency to join the Women’s March on Washington scheduled for January 21, the day after the presidential inauguration.

“This will have an effect. We need to throw everything at this. This man is slightly unhinged, if I can say that, and he’s a malignant narcissist. He cares very much about what people think of him. He wants to be the popular guy. And he’s going to be very upset if there’s a lot of people there.” (source)

Can you imagine the reaction if Clinton had won and Trump supporters behaved this way?

As always, there’s some weirdness that I find suspicious.

First of all, why was the commander of the Washington DC National Guard fired, effective one minute after Trump is sworn in?

Major General Errol R. Schwartz will leave his post during the ceremony, while thousands of his men are deployed to help protect the Capitol. In light of the massive unrest that is expected, this seems like a dangerous move. Major General Schwartz, who assumed his post under President George W. Bush, agrees.

“The timing is extremely unusual,” Schwartz said in an interview Friday morning, confirming a memo announcing his ouster that was obtained by The Washington Post. During the inauguration, Schwartz will command not only members of the D.C. Guard but also 5,000 unarmed troops dispatched from across the country to help. He also will oversee military air support protecting Washington during the inauguration.

“My troops will be on the street,” said Schwartz, who turned 65 in October. “I’ll see them off, but I won’t be able to welcome them back to the armory.” He said he would “never plan to leave a mission in the middle of a battle.” (source)

The Department of Homeland Security, who has warning list after warning list pinpointing innocent actions as signs of impending terror, says that there’s nothing to worry about on Inauguration Day.

In a briefing on Friday, DHS Secretary Jeh Johnson, said authorities are not aware of any “specific, credible threat” targeting the Inauguration. However, he went on to say this.

Homeland Security is aware, Johnson said, that anarchist protest groups plan to have “a full range of planned activities.” He also said that they have technology to neutralize any drones, which are not allowed in D.C. airspace. (source)

That sounds so very peaceful.

Get prepared for America to be under siege.

Hopefully, the weather will be so horrible that it discourages all but the very hardiest of troublemakers. It’s likely that the shenanigans will take place mostly in the major cities. However, post-election, roadways throughout the country were shut down by protesters.  A certain shady billionaire had his grimy little fingerprints all over the escalating violence. It’s almost certain he and the Clintons will fan the flames during the Inauguration festivities too.

If you aren’t prepped for this, you can go here to download a free PDF that tells you what you need to do. Staying home and avoiding the crowds is the very best course of action for most people. You’ll want to make sure that you have everything you need so that you can shelter in place if trouble comes to your area.