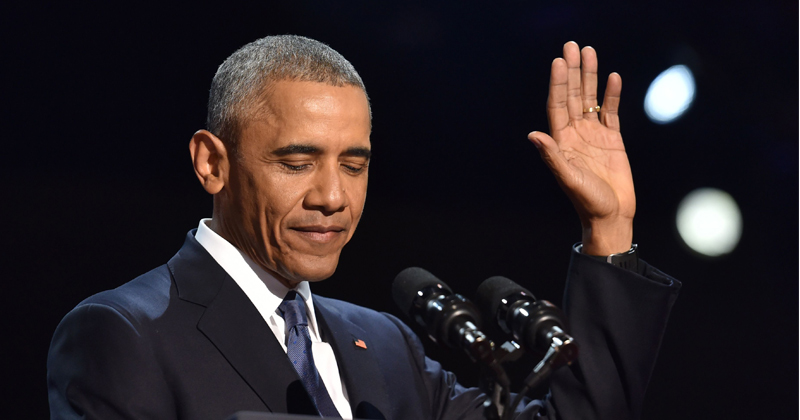 Here are a few snippets from Obama’s goodbye speech to the American people:

“Going forward, we must uphold laws against discrimination…But laws alone won’t be enough. Hearts must change…For blacks and other minorities, it means tying our own struggles for justice to the challenges that a lot of people in this country face – the refugee, the immigrant, the rural poor, the transgender American, and also the middle-aged white man…For white Americans, it means acknowledging that the effects of slavery and Jim Crow didn’t suddenly vanish in the ‘60s; that when minority groups voice discontent, they’re not just engaging in reverse racism or practicing political correctness…”

The question is: do people want empty sentimental sop from Obama or do they want action?

Well, it’s too late for action, because Obama’s presidency is done. And it makes no difference whether, as a result of his final speech, people view him as a great and honorable man who did his best, or as a con artist, because again, he’s on his way out the door.

Needless to say, his supporters were deeply moved by his words. They want to be moved. They don’t want to look at uncomfortable facts.

For example, let’s go to CNN, which is going to offer the best possible interpretation of economic indicators for black people in America.

“Blacks have seen their median income stagnate, along with the rest of the population…Median income [for blacks] stood at $35,398 in 2014, just a touch below where it was in 2009, when Obama took office. But it has climbed back from [a low of] $33,926 in 2011…The Great Recession sent many Americans into poverty, but blacks were hit particularly hard. The [poverty] rate for blacks hit 27.6% in 2011, nearly 2 percentage points higher than what it was when Obama was sworn in. It has since receded to 26.2%.”

If you call that a ringing endorsement of Obama’s performance as president, you’re in need of help.

Let me put it this way. For all Obama’s talk about racism and prejudice and justice, Americans of every description and color have been willing, for a long time, to work alongside each other and get along—IF THERE IS WORK TO BE HAD. DECENT PAYING WORK.

Obama is, in effect, trying to move back to another time, before that was the case.

When he was elected, in 2008, during the recession, his closest advisors thought he would come out swinging and do everything possible to create jobs. That was the number-one concern of Americans.

They were absolutely shocked when he opted for Obamacare out of the gate, as his first priority. And look what it has led to: a massive mess.

Gazing at his presidency head-on, without excuses, it’s clear that Obama chose to IGNORE jobs. He didn’t want to make a move in that arena.

The answer is stark and simple: the Globalist agenda forbids the creation of new jobs, and Obama is a Globalist. He was plucked out of nowhere by Ted Kennedy and mentored by Zbigniew Brzezinski, the co-founder of the Trilateral Commission, along with David Rockefeller. The Trilateral Commission is the single most important Globalist force in the world. And of the 87 members of the Commission who live in the US, Obama appointed 11 of them to key posts in his administration.

This is no accident. This is intentional.

The idea that Obama would launch a no-holds-barred effective crusade against corporations leaving the US and throwing huge numbers of Americans (of all colors) out of work, is laughable. Look at the record, if you need verification. It never happened. It was never going to happen.

The man can talk forever about discrimination and prejudice and social justice, but those words fall flat, because he has never taken action to correct the true crime—which is there for all to see: Globalists are committed to torpedoing economies.

Obama can be a master of overly sentimental rhetoric—but this is merely a diversion.

And aside from the massive loss of jobs, if he has been talking about the inner cities of America, he should have focused on the enduring disasters that destroy life in those places and hold law-abiding citizens hostage: gangs, the murders they commit, their other crimes, drugs, and the absence of fathers in homes. That’s where he would have started. And he would have launched solutions.

In various ways, over and over, he simply said: “We’re all in this together.” That and $2 will get you a bus ticket in Chicago.

We’re all in this together doesn’t destroy pernicious Globalist trade treaties or create jobs for people who are willing and ready to go to work and support their families.

We’re all in this together doesn’t eliminate gangs, killings, drugs, and highly dangerous neighborhoods.

We’re all in this together doesn’t start a national program of urban farms in inner cities, and suddenly give people the opportunity to grow their own fresh clean food, eat it, and make money by selling the excess.

We’re all in this together doesn’t help create a culture in which fathers deserting their families is a cardinal offense.

We’re all in this together does pour a pleasant syrup of “deep concern” on the heads of people who, above all, want to appear virtuous. These are the people who can be led to believe in an imitation of actual solutions and action.

They are content to think that a leader who espouses a lofty ideal has done enough. Everyone else should put the ideal into action. If they don’t, it’s not the leader’s fault. He flew the banner. He recited poetics. He wanted a better world. He was operating at a higher level—and unfortunately, the bulk of humanity couldn’t grasp its profundity.

During his term in office, did the man who said, “If I had a son, he would look like Trayvon Martin,” ever walk through the devastated black neighborhoods of American cities and talk to long-term law-abiding residents (not self-appointed leaders or criminals) and ask them bluntly what their greatest concerns were, and press for real down-to-earth answers? Or did he think that food stamps, low-income housing, welfare checks, and other forms of government dependence were enough?

When he talked about “educational opportunities,” did he really think Common Core schools, with their lunatic indoctrination into “sustainable economies,” were going to function in communities where masses of unemployed people look over their shoulders in fear of their safety?

Who bought what he was selling? Liberals.

Who has paid the price? The people who live in the neighborhoods where sentiment gets you nothing.

And those who, still and always, assert how brilliant President Obama is believe his failure to make a difference was just a mistake? An oversight?

Does self-deception have no bounds?

The answer is blowing in the winds of Detroit and Chicago.