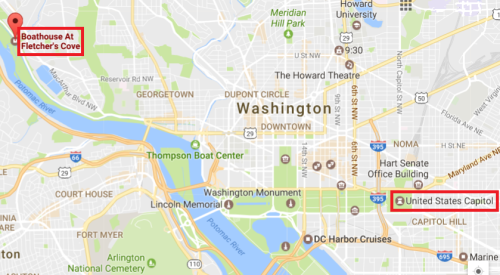 About 2 weeks before Donald Trump’s inauguration as America’s 45th President, D.C. police found two caches of weapons near the Boathouse at Fletcher’s Cove on the Potomac River in northwest D.C.

Below is a screenshot I took from Google Maps showing how close the Boathouse is from the Capitol Building (6.5 miles), before which Trump will be sworn in as POTUS.

Megan Cloherty reports for WTop that on Jan. 4, 2017, the discovery of a violin case containing two guns led police to uncover a cache of even more guns and ammunition along the Chesapeake & Ohio Canal near the Boathouse at Fletcher’s Cove in Northwest D.C.

A woman walking along the canal that morning saw some debris surrounding a violin case along the stone wall that lines the road, according to park police. When she opened the case, she found two guns inside, and she brought it to authorities near Fletcher’s boathouse.

About a quarter-mile north of that location, U.S. Park Police and D.C. police found a second site with multiple weapons and ammunition surrounded by trash and other debris.

Park Police spokeswoman Sgt. Anna Rose said there were a variety of weapons in buckets and bags, including long guns and pistols, but she didn’t believe any of them were loaded. “There’s no indication as to why these weapons were here, when they came to be here or the circumstances surrounding it — that part’s all under investigation,” Rose said.

Meanwhile, the Left are planning to shut down the inaugural parade and harass people attending the inauguration. One of the groups is #DisruptJ20.

Here’s what a member of Disrupt J20 looks like — a transvestite with nose ring:

Jim Hoft reports for Gateway Pundit, Jan. 14, 2017, that conservative Aussie Trevor Loudon captured on audio a protester, as people cheered in the background, announcing plans to shut down the Inauguration and to “crash” the pro-Trump “Deploraball” on Jan. 19.

Below is a video of Disrupt J20.

The discovery of the two caches of weapons so near where Trump will be inaugurated puts a sinister cast on the report that increasing numbers of Democrat lawmakers plan to boycott and skip the inauguration ceremony.

According to the WSJ, at least 20 lawmakers, all Democratic members of the House, have said they wouldn’t attend. The reasons given include Trump’s alleged lewd comments about women and remarks about illegal immigrants.

Others feign outrage at Trump’s tweet in response to Rep. John Lewis (D-GA) calling Trump not a “legitimate president”. On NBC’s Meet the Press, Lewis said:

“I don’t see this president-elect as a legitimate president. I think the Russians participated in helping this man get elected. And they helped destroy the candidacy of Hillary Clinton.”

Lewis managed to avoid noting that none other than Director of National Intelligence James Clapper recently stated there’s no evidence that Russian hackers had changed vote tallies or interfered with voting systems in the 2016 presidential election.

Unlike eunuch-like Republicans who never stand up to Democrats, Trump responded to Lewis’ egregious insult with three tweets:

Imagine the nerve of that Trump actually refusing to take Democrat abuse!

Imagine the nerve of that Trump, daring to criticize a BLACK politician!

Traditionally, inaugural events are attended by lawmakers from both sides of the aisle. In fact, a bipartisan committee known as the Joint Congressional Committee on Inaugural Ceremonies is responsible for the swearing-in ceremonies and a luncheon at the U.S. Capitol. By boycotting the 45th Presidential Inauguration, it’s Lewis, Lieu, and other Demonrats who are “un-American”.

Other un-American Democrats who say they’re boycotting the Inauguration are:

If it turns out anti-Trump protesters wield weapons and disrupt the Inauguration with violence, then it is not unreasonable for us to suspect the above Democrats had foreknowledge and so stayed away.