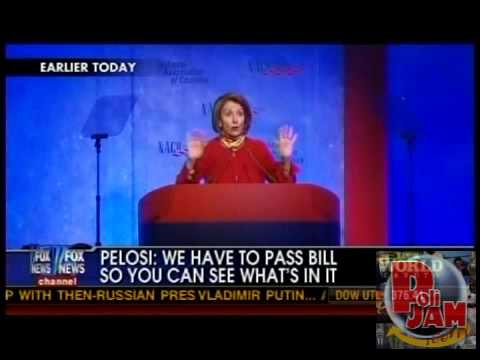 With Obamacare in its well-deserved death throes, supposedly “affordable” care act champion Nancy Pelosi has taken to Twitter to rigorously defend her piece of crap legislation to its bitter end with hilarious Tweets that come across as proof that she has completely lost touch with reality in a way that she should probably go get professional medical advice on.

The bandwagon of fail really kicked into full swing a few weeks ago when Pelosi sent this out… and apparently she wasn’t joking:

The GOP wants to dismantle ACA & consequently increase costs. It's wrong. It will have an major impact on hardworking families & raise taxes

See how the comedy is built right in here?

You know what had a major impact on hardworking families and raised their taxes??

You just described what Obamacare has done for the last half decade. https://t.co/5OFTIenhkg

Pelosi has gotten so desperate, she is also trying to trend the hashtag #MakeAmericaSickAgain.

Don’t be fooled. No matter how you slice it, GOP’s plan to repeal & replace is a scam that will #MakeAmericaSickAgain https://t.co/kybYS6Opn9

Doesn’t even make any sense. America is already sick… thanks to Obamacare they can’t afford. To be “sick again” means at some point America was healed.

By the way, do you know what the official definition of the word “idiot” is?

It is crucial that we never forget the stories of those left out by @HouseGOP's bid to #MakeAmericaSickAgain. https://t.co/fyUayYAer4

Because there aren’t stories coming out of all corners of the country of people who liked their doctor but didn’t get to keep him or her, people who Obamacare was so darn “affordable” for that it priced them out of the market completely so they actually lost their health insurance and were left uninsured by ACA.

For more on that, see:

As Predicted, Obamacare Is Absolutely Killing the Middle Class

This Arizona County is About to Lose All Obamacare Insurers

And that’s to say nothing of the “young and healthy” tax that landed on the backs of the younger generations who couldn’t afford Obamacare (and likely didn’t really need it anyway).

In 2014 alone, 8.1 million tax filers who elected to forgo buying health insurance were slammed with $1.7 billion in Obamacare penalties, about 40% of which was robbed from people making less than $35,000 per year.

And yet, Pelosi just keeps going, sounding crazier by the day.

"If you want Grandma living in the guest room, then repeal ACA" -Nancy Pelosi, coming out as anti-Grandma.

Or how about this complete rewriting of history:

With @HouseGOP sprinting ahead w/o plan, it’s worth remembering how carefully we considered #ACA. #FlashbackFriday https://t.co/yOVNGF9TtU

How carefully you con— HOW CAREFULLY YOU CONSIDERED IT?! When exactly was that, Nance?

When you were threatening your fellow Congresspeople that they had to sign the bill first if they wanted to find out what was in it?

Perhaps she really has just lost it.

Don't make us snort laugh. @NancyPelosi of "We have to pass the bill to know what's in it" fame claims Obamacare was "carefully considered".

You know, when Vox recently asked her if she had even one Obamacare regret, you know what Pelosi said? She “can’t think of anything”.

Her fat bag of crazy also comes with a generous helping of logic fail.

Then again, Pelosi also truly believes this, so…

Ultimately, you have to wonder if they forgot to let her in on what everyone else seemingly already knows — that Obamacare was always designed to fail and usher in government-run socialized medicine.