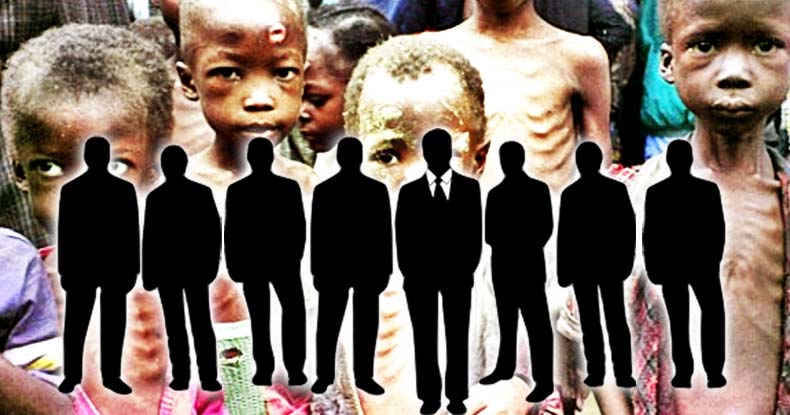 A startling figure has just been released showing the ever-widening gap in wealth between the world’s upper echelons and nearly everyone else — the eight richest men on the planet are now worth as much as 3.6 billion people.

Oxfam plans to release its report at the World Economic Forum — a convention for top business executives, academics, and policy makers — which begins on January 17 in Davos, Switzerland, and this year will focus on “responsive and responsible leadership.”

While it might be tempting to view the statistic of so few people having amassed as much wealth as 3.6 billion as the problem in itself, it should be noted many of the businesses they own or run receive government welfare, incentives, and benefits the rest of us would never be privy to.

“Oxfam said it didn’t name the richest 8 billionaires in its report because its goal is to call attention to the political and economic mechanics that are creating widening inequality,” CBS News reports. “Still, the 8 billionaires are those at the top of the Forbes’ billionaire list, many of whom have pledged to spend large portions of their fortunes on charity.”

Gawain Kripke, the director of policy and research at Oxfam America, noted, “It puts in in stark terms the biblical proportions of the economic health of the world, where 8 people have as much economic power as 3.6 billion people. “There is a moral frame to this: is it right, that so much economic power adhere to those few individuals? Is our economy working right if this is what is happening? Is it moral that so many people struggle when so much wealth is available?”

After considering further information from Credit Suisse, Oxfam revised last year’s figures which had found 62 people as wealthy as the ‘bottom’ half of the population. This year’s statistic, now just eight people with that same wealth, shocked the authors of the report — and they’ve suggested measures to take to begin bridging the divide. As the New York Times reports:

“They include higher taxes on wealth and income to ensure a more level playing field and to fund investments in public services and jobs, greater cooperation among governments on ensuring workers are paid decently and the rich don’t dodge their taxes. And business leaders should commit to paying their fair share of taxes and a living wage to employees.”

However, though economic inequality as shown in the Oxfam report indeed illustrates astonishing differences in advantage around the globe, it isn’t wealth for its own sake driving the problem — nor is it stratification. In many cases, top executives can procure assistance from the government — both personally and for the businesses they own.

While you’re told by the Sean Hannitys of the world that the government takes from the rich to redistribute to the poor, the reality is actually the opposite. The state fleeces the poor and middle class in America, and that money is, in turn, redistributed to the most wealthy Americans.

David Brunori, a Forbes contributor, noted three years ago concerning a report titled, “Subsidizing the Corporate One Percent,” that “three-quarters of all state economic development subsidies went to just 965 corporations since the beginning of the study in 1976. The Fortune 500 corporations alone accounted for more than 16,000 subsidy awards, worth $63 billion – mostly in the form of tax breaks.

“Think about that. The largest, wealthiest, most powerful organizations in the world are on the public dole. Where is the outrage? Back when I was young, people went into a frenzy at the thought of some unemployed person using food stamps to buy liquor or cigarettes. Ronald Reagan famously campaigned against welfare queens. The right has always been obsessed with moochers. But Boeing receives $13 billion in government handouts and everyone yawns, when conservatives should be grabbing their pitchforks.”

Some of the biggest corporations receive tax breaks on enormous CEO bonuses. They can claim tax deductions for luxury vehicles, jets, chauffeurs, and other big-ticket items in the name of ‘security’ for top executives. Grossly inflated subsidies are provided to the oil and gas industry, the pharmaceutical industry, and the agriculture industry, or Big Ag. Corporations garner tax subsidies from state and local governments. And the biggest corporations fund lobbyists — and win hundreds of billions in federal contracts.

And those are only a few of the ways corporations and executives game the system to amass huge fortunes.

“We have a situation where billionaires are paying less tax often than their cleaner or their secretary,” Max Lawson, Oxfam policy advisor, told the Associated Press.

Perhaps it isn’t taxes that are the problem either — but the fact these elite businessmen manipulate the system of taxation for their own advantage in a way the average person would never be able to do. In fact, the tax code itself is written in favor of government-connected megacorporations. It is, by design, a means of extracting wealth from the lowever, middle, and upper class and redistributing it to the extremely wealthy in the 1%.

The ruling elite in the United States quite literally hand-pick politicians and pay for their campaigns to put them in office. More than half of all donations provided to the 2016 presidential candidates, in both parties, proves this notion as they came from a mere 158 families.

As Pulitzer Prize-winning reporter, David Cay Johnson, points out, the results of such a government system are,

“policies that take from the many and redistribute to the already rich few through stealth techniques that rarely make the news but can be found in the public record. Among these policies are a failure to enforce the laws of business competition, severe restrictions on unions and subsidies galore for big companies.”

When the topic of the ultra-rich controlling elite is brought up, most of the time the free market gets the blame. But most of these opinions fail to take the role of the state into consideration.

“Such massive inequality reflects not market economics but political influence that tilts the economic playing field,” explains Johnson. “And because of their political influence, those at the very top get tax favors, especially the deferral of taxes into the distant future, which transforms the burden of taxes into a bonanza of increased profits.”

But because the gap continues to grow unhindered, Oxfam concluded, as CBS News explained, “the bottom half of the U.S. population has been ‘shut off from economic growth for over 40 years.’”

Oxfam argues ‘governments should be designed for the bottom 99 percent of income earners’ instead of benefiting only the wealthy elite.

Although the charity omitted the names of the eight billionaires in its analysis, the Times noted, “Oxfam used Forbes’ billionaires list that was last published in March 2016 to make its headline claim. According to the Forbes list, Microsoft founder Gates is the richest individual with a net worth of $75 billion. The others, in order of ranking, are Amancio Ortega [$67 billion], the Spanish founder of fashion house Inditex, financier Warren Buffett [$60.8 billion], Mexican business magnate Carlos Slim Helu [$50 billion], Amazon boss Jeff Bezos [$45.2 billion], Facebook creator Mark Zuckerberg [$44.6 billion], Oracle’s Larry Ellison and Bloomberg, the former mayor of New York [$40 billion].”

Winnie Byanyima, executive director of Oxfam International will attend the forum in Davos, and criticizes what the report actually shows, stating,

“It is obscene for so much wealth to be held in the hands of so few when 1 in 10 people survive on less than $2 a day. Inequality is trapping hundreds of millions in poverty; it is fracturing our societies and undermining democracy.”

Sadly, the response to this inequality will be more tax programs that will strike the poor and middle class the hardest — creating even more divide by funneling money upward toward those at the top of government.

Not until the state’s power to take money from its citizens is reined in will this flood of upward redistribution of wealth recede.