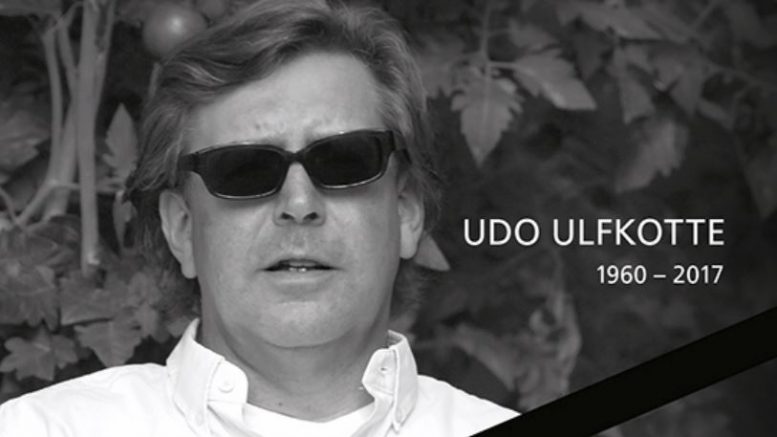 Udo Ulfkotte, a German journalist and whistleblower who spoke out against fake news from government and intelligence sources, has died from a heart attack at the age of 56. He was an assistant editor for German mainstream media newspaper Frankfurter Allgemeine Zeitung, and he lived in many Middle Eastern countries during his career, including Iraq, Iran, Afghanistan, Saudi Arabia, Oman, United Arab Emirates, Egypt and Jordan.

As Ulfkotte became increasingly upset at news reports sourced from false government information, he began publishing a magazine called Whistleblower, which reports on topics not covered by the German media. He also wrote multiple books on the subject during the 2000s.

Ulfkotte is best known to international viewers from select appearances on Russia Today, specifically an October 2014 interview about his book Bought Journalists, in which he discussed the epidemic of propaganda in mainstream media news reports and the increased anti-Russia sentiment being generated. He also discussed the heavy influence on international news from American, Israeli and other Western intelligence agencies.

Ulfkotte described his experience saying “I’ve been a journalist for about 25 years and I was educated to lie, to betray and not to tell the truth to the public,” referring to his career in mainstream media. He also noted that he was “fed up” with the propaganda and said he was speaking out, despite admitting having heart trouble on television.

I’ve had three heart attacks, I have no children, so if they want to bring me to court or to prison, so it’s worth for the truth.

The interview only has 166,000 views on the official RT channel; however, it has likely been seen millions of times because the video has been uploaded by many other YouTube channels and Facebook pages. The interview is often shared as a detailed example of mainstream media’s disinformation campaigns.

I’m going to stand up and say it is not right what I have done in the past, to manipulate people, to make propaganda against Russia and it is not right what my colleagues do and have done in the past, because they are bright, to betray the people not only in Germany all over Europe.His comments were one of the earlier warnings about anti-Russia propaganda which came before the recent escalation that features American media claiming Russian officials influenced the 2016 US election in favor of Donald Trump. He went on to condemn the anti-Russia propaganda related to the Ukraine crisis, telling RT “seeing right now within the last months how the German and American media tries to bring war to the people in Europe to bring war to Russia, this is a point of no return.” Ulfkotte also apologized for his role in the past because he felt “ashamed” for some of the news reporting in his name.

The reason I’m writing this book [Bought Journalists] is that I am very fearful of a new war in Europe and I don’t like to have this situation again, because war is not never coming from itself. There’s always people behind it to push for war and this is not only politicians, this is journalists too.” He then noted the problem is “especially” in German media saying “my colleagues who day by day write [propaganda] against the Russians, who are in trans-Atlantic organizations, and who are supported by the United States to do so.

Ulfkotte went on to describe his personal experience with American influencers and intelligence agencies.

“I was bribed by the Americans not to report exactly the truth. I was invited by the German Marshall Fund of the United States to travel to the US. They paid for all my expenses and put me in contact with Americans they’d like me to meet,” he said. “I became an honorary citizen of the state of Oklahoma in the US just because I wrote pro-American. I was supported by the CIA. I have helped them in several situations and I feel ashamed for that too.”

Many journalists based in different countries are involved in the same practice of working with American and European intelligence agencies to varying degrees, Ulfkotte also added.

Most of the journalists you see in foreign countries, they claim to be journalists and they might be. But many of them, like me in the past, are so-called ‘non-official cover.’ It means you work for an intelligence agency. You help them if they want you to, but they will never say they know you.

Ulfkotte also discussed the specific progression of how mainstream media journalists are sought out and eventually approached by government agents. The unofficial working relationships between these journalists and intelligence agencies usually begin as a friendship, to prep the journalist before proposing the cooperation.

“They work on your ego, make you feel like you’re important, and one day one of them will ask you ‘Will you do me this favor?’” he explained.

Udo Ulfkotte referenced one instance where he was asked to print a news report based on intelligence which he could not verify, and he noted the conclusion of the article was already determined. The propaganda effort was part of building the campaign by Western countries to remove Libya’s Muammar Gaddafi from power.

“One day the BND (German foreign intelligence agency) came to my office at the Frankfurter Allgemeine in Frankfurt. They wanted me to write an article about Libya and Colonel Muammar Gaddafi. They gave me all this secret information and they just wanted me to sign the article with my name,” Ulfkotte told RT. “That article was how Gaddafi tried to secretly build a poison gas factory. It was a story that was printed worldwide two days later.”

Udo Ulfkotte has also been part of the increased controversy in Germany about how to handle the growing refugee crisis, as migrants from the Middle East and Africa flee war zones and poverty. Facebook temporarily blocked his page in July 2016 after he bought an ad for his new book titled Boundless Criminal, which exposes alleged cover-ups by authorities and mainstream media to hide crimes committed by migrants. The message he received from the social network read that the content of the posting “violated its guidelines,” likely because of a perceived anti-immigrant and anti-Muslim message.

“I don’t claim every migrant to be a criminal, that would absolutely not be correct, but we have not checked which people that we in our country,” Ulfkotte told RT when asked about his positions.

Prior to the current crisis, Ulfkotte had expressed concerns about the “Islamization” of Germany for 15 years, writing multiple books on the subject.

Germany received almost one million asylum seekers in 2015 and may have reached similar numbers in 2016. Many of the refugees have come from Syria and Iraq after fleeing their hometowns because of the Islamic State and other groups.

Baran Hines writes for ActivistPost.com. He is the founder of WTFRLY.com, where you can read more of his work.