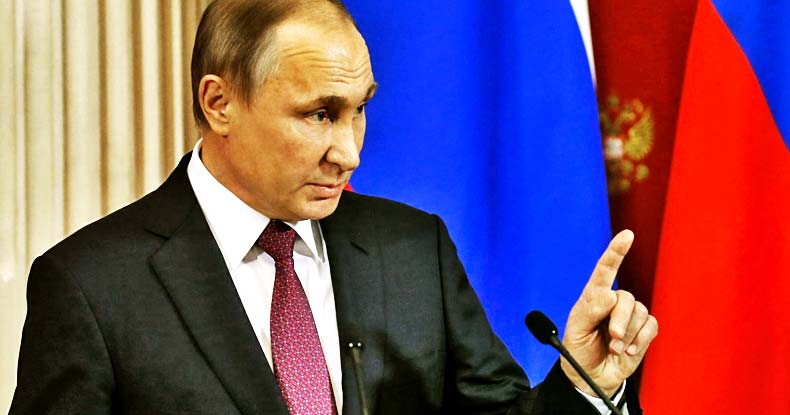 Moscow, Russia – During a press conference in Moscow, on Tuesday, Russian President Vladimir Putin weighed in on the ongoing power struggle taking place in the U.S. in the lead up to the transition of power in Washington, D.C. on January 20 – going so far as to call it a “soft coup.”

Putin was direct in his interpretation of events that are currently transpiring in the U.S., noting that he sees the same forces currently at work in America, as were behind the 2014 soft coup in Ukraine. That coup began under the auspices of peaceful protests, but strategically devolved into a violent confrontation that saw Viktor Yanukovych pushed from power in Ukraine.

“I have an impression they practiced in Kiev and are ready to organize a Maidan in Washington, just to not let Trump take office,” Putin said, referring to the Euromaidan protests in Ukraine that led to the ouster of the country’s pro-Russian president, Viktor Yanukovych, in February 2014.

The Euromaidan was used by the West as an opportunity to pull Ukraine from the Russian sphere of influence and into a pro-Western economic and security paradigm under the guise of supporting democratic freedom and fighting corruption. This resulted in an internal conflict of identities within Ukrainian society.

Over the course of the three months that the protests took place, conflict solidarity was seen rising on both sides, as well as clear indications of mobilization by both groups, with sporadic episodes of violence and occupation. After months of Independence Square being occupied by protestors, the tragic events of February 20, 2014, which left over 70 dead, drastically changed the trajectory of the conflict and served as a conflict trigger event that would begin a multilevel conflict action, with the massacre eventually leading to the deposing of the Yanukovych government.

While there is almost wholesale acceptance amongst the Western academics, media, and governments, that the mass killing of protestors was undertaken by Berkut special police and government snipers, due to this narrative’s promotion by the post-Yanukovych government, the evidence underpinning these conclusions is scant at best.

A detailed academic investigation by Ivan Katchanovski reveals that these events were actually a false flag operation, which was planned and operationalized with the intent of overthrowing the Yanukovych government by an alliance of ultra-nationalist organizations, such as Right Sector and Svoboda, and oligarchic parties, specifically Fatherland. Additional evidence indicates that the U.S. was already actively planning the creation of a new Ukrainian government as evidenced by the leaked audio of a conversation between Assistant Secretary of State for European and Eurasian Affairs at the U.S. Department of State Victoria Nuland and U.S. Ambassador to Ukraine Geoffrey Pyatt.

Putin made note that there is an intense behind the scenes political struggle underway in the US, adding that there are certain forces that aim “to undermine the legitimacy of the president-elect.”

“We are witnessing an ongoing acute political struggle in the US, whose task is to undermine the legitimacy of the president-elect,” Putin said, according to the Russian news agency Interfax.

There has been a concerted effort undertaken by elements of the neocon/liberal interventionists (military industrial complex), Clintonites and their mass media allies (Podesta, Wapo, CNN, etc.), the Obama administration and their cronies in the security services (Obama, Brennen, etc.) to delegitimize and undermine President-Elect Trump’s stated foreign policy plans regarding Russia.

Putin sees these anti-Trump forces in the U.S. attempting to “bind hand and foot” the newly-elected leader, with the clear aim of these forces being to interfere with the domestic and international policies outlined by Trump during his presidential campaign.

These “western elites” attempting to dictate public policy from the shadows “severely harm US interests,” Putin said, adding “The media frenzy surrounding Trump speaks of the degradation of US political elites.”

Putin, who noted that he had never met Trump, said he hoped the US and Russia could eventually reset their troubled relations, adding he has no reasons to “attack or defend him.”

“I don’t know Mr. Trump personally, I have never met him and don’t know what he will do on the international arena. So I have no grounds to attack him or criticize him for anything, or protect him or whatever,” Putin said.

While there are certainly a large number of issues to take with the Trump presidency, advocating for peace with Russia is positively a beneficial one.

It is also important to note that Putin is no angel either. However, he is actively campaigning for deescalation of conflict and has remained uncannily calm as NATO troops amass along the Russian border, which, again, is a beneficial issue.

When you come to understand the vast interconnectedness of the political parties (DNC & GOP), as simple vessels for the corporate security state, you realize the unique threat Trump’s stated plans of rapprochement with the Russians presents to the deep state and military industrial complex, which relies on the “Russian threat” as the driving force for big budget military expenditures.

For example, the U.S. just began a trillion dollar upgrade of its nuclear arsenal. What is the reason? Well, of course, it’s due to maintaining nuclear parity with Russia, thus less tension with Russia equates to less money for the armaments industry. The war on terror was determined to not be lucrative enough, in terms of big budget defense items, thus a pivot back to the “evil Russia” narrative as it allows for more F-35s, tanks, and nukes.

These hidden forces are doing everything they can to continue to paint Russia as the enemy, with little regard for the real world implications of their imperialist policies (nuclear war), as a means of using fear to fleece the American taxpayers out of trillions of dollars.

President Eisenhower, in his farewell address, warned of the dangers of the influence of the weapons and armaments industry – and their corrupting influence on the fabric of American freedom. Without question, the warning of Eisenhower has fully come to fruition with the deep state/political soft coup against Trump.

Regardless of how much one despises Trump, the inherent danger of allowing shadowy forces to dictate public policy from behind the veil of secrecy is dangerous to the very existence of the United States, as Eisenhower warned – and is exponentially more dangerous than any politician – including Trump.