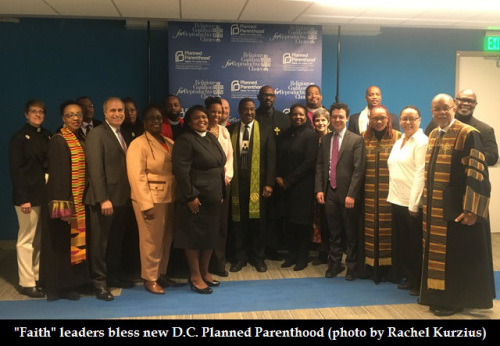 In a gushing, approving report, dcist describes the event as ringing “with the sound of drums as visitors entered, courtesy of all-female percussion troupe Batala Washington.” Batala member Erin Schmieder said her group chose to participate in the event because “there are a lot of us throughout our lives who have benefited from Planned Parenthood,”oblivious to the fact that she would have been aborted had her mother “benefited from Planned Parenthood”.

The “faith leaders” were comprised of Christian ministers, a rabbi, Hindu priests, an Imam, and abortion “doctors,” including:

Before the “blessing” ceremony kicked off, the “religious leaders” gathered upstairs for a prayer circle, led by Rabbi Namath, who called upon their obligation to the world to “make it whole and holy” and spoke of the belief in Jewish tradition that making healthful decisions about one’s body is a way to honor God. After reciting Hebrew, Namath said, “May the ones who bless our ancestors bring healing on all in need. God, let your spirit rest upon these caregivers, who serve as instruments of your hands.”

Note: Betcha you didn’t know that the Talmud — Jews’ sacred scripture, more important than the Torah — regards the fetus as not a person (nefesh). That would explain why polls have shown that more Jews support abortion rights and Roe v. Wade than any other religious or ethnic group in the U.S. (Source: Michael Hoffman, Judaism’s Strange Gods, p. 312).

“In almost every message to our staff, I talk about our doing sacred work. This confirms the sacredness of the work we do.”

The Oxford Dictionaries define “sacred” as “Connected with God or a god or dedicated to a religious purpose and so deserving veneration“.

The murder of babies is “sacred work” only if one’s god is the demon Moloch, an ancient god to whom apostate Israelites and pagans sacrificed their children by fire. As Leviticus 18:21 warned: “Do not give any of your children to be sacrificed to Molek, for you must not profane the name of your God. I am the Lord.”

Unlike the “faith leaders” at that “blessing” event in D.C., Planned Parenthood supporter Marcus Jay Shapiro was at least honest when he yelled “Hail Satan” at an El Centro, California city council meeting in March 2015.