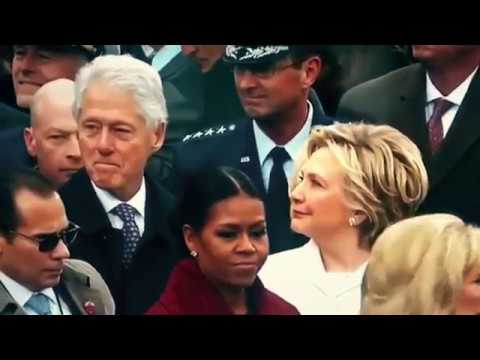 Word is Bill was looking directly in Ivanka Trump’s direction and some claim it even appears as if the former president mouths her name.

Seriously though, the guy looks like one of those icky creepers who, despite being 70, likes to hang out in clubs and try to scam on college girls… and Hillary catches him in the middle of doing it for what surely must be the 438,763rd time in their relationship over the decades and rolls her eyes at him as if to say, “My God, what a humiliating troglodytic manchild you are. Your complete lack of self-control is matched only by your complete lack of self-awareness. What fifth level of hell is this that I got stuck pretending to be married to you for the rest of my life?!”

Overall, it just wasn’t a good day for Hillary. When the couple was first announced at the ceremony, she was immediately booed, walking in to familiar chants of “Lock her up! Lock her up!”