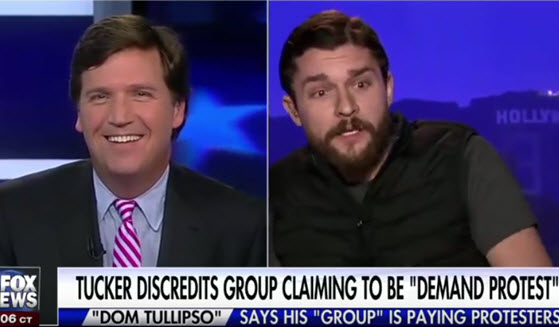 The interview goes from ridiculous to hilarious. Carlson opens with,

“This is a sham, your company isn’t real, your website is fake, the claims you have made are lies, this is a hoax. Let me start at the beginning, however, with your name, Dom Tullipso, which is not your real name. It’s a fake name, we ran you through law enforcement-level background checks and that name does not exist. So let’s start out with the truth. Tell me what your real name is.”

And it just goes from there…

Tullipso tried. He almost had it until he said,

“We are greatly, greatly supportive of national treasures such as Julian Assange, Edward Snowden, and Peyton Manning, and we really support their efforts to really get the truth out there…”

Just watch. This is comedy gold.