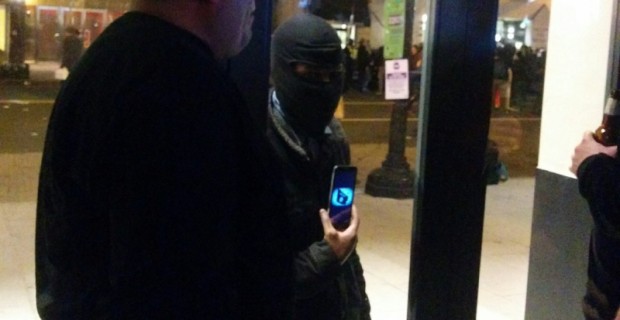 Images taken during the violent unrest in Washington DC this week show an anti-Trump Antifa protester displaying a photo of an ISIS flag and an ISIS beheading video on his phone to intimidate Trump supporters.

The individual who took the photos of the protester sent them to Infowars. He said he was inside the Proper 21 sports bar in northwest Washington on Thursday night when the protester approached the glass window.

“A man outside in a partial black mask held up an ISIS flag on his phone he was showing people inside through the glass (mainly Trump supporters),” the source tells us.

“He pointed both fingers to his eyes and then to those watching him,” said the eyewitness, adding, “We alerted security at the bar but do not think anything was done. He returned to show a video of an ISIS beheading as if to taunt those inside.”

The individual said that he had also filed an online FBI report about the incident.

The photos clearly show that the protester is displaying an ISIS flag on his phone as well as what appears to be an ISIS propaganda video.

Trump supporters are also seen discussing in this video at the 1 hour mark how “one guy was showing us an ISIS video”.

The fact that social justice warriors are now using ISIS propaganda in an effort to intimidate their political adversaries is interesting given that ISIS has written in its own manifesto of plans to recruit members of the far-left since both groups broadly share the same goals.

Entitled Black Flags from Rome, the December 2015 manifesto includes a section called European Muslims Allying With Left Wing Activists which states that jihadists and left-wingers “will start to work together in small cells of groups to fight and sabotage against the financial elite.”

It appears as though at least some members of Antifa, the anarchist/communist group that caused mayhem in DC Friday, are open to that possibility.