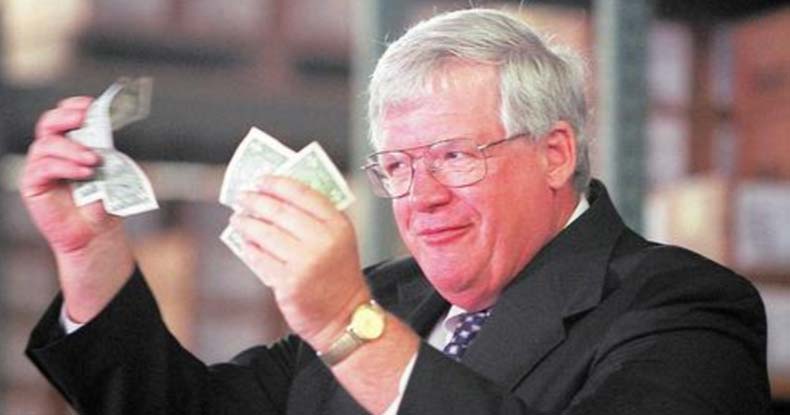 In April of last year, Dennis Hastert, former Speaker of the House and admitted child rapist, was sentenced to 15 months in prison for paying his victims to keep quiet.

Hastert was sentenced, not for raping children, but for illegally structuring bank transactions in an effort to cover up his sexual abuse of young members of a wrestling team he coached.

Now, this sicko pedophile is trying to get back that hush money. Because one of the boys he raped broke his silence, in spite of the $1.7 million in hush money Hastert gave him, this pedophile politician wants his money back.

When the victim, known only as ‘Individial A’, broke his silence, Hastert’s child rapes were exposed — resulting in the subsequent prosecution.

Individual A did not go public with this information — he merely spoke to the FBI after the transactions were uncovered by investigators. The victim’s attorney, Kristi Browne told NBC that it was Hastert who was at fault.

“Mr. Hastert has decided that rather than live up to his promise to compensate his victim for his molestation and resulting injury, he will ask his victim to pay him,” she said in a statement.

“He admits to agreeing to make payments, but then denies that it is an agreement that he has to keep. His response is predictable and we look forward to entering the discovery phase of the case.”

Hastert, who happens to have a long and friendly past with none other than the Podesta family, is currently serving his sentence at the Federal prison hospital in Rochester, Minnesota. Although Hastert wasn’t sentenced for the pedophilia, because the statute of limitations had run out, the judge labeled him a “serial child molester” and ordered him to enroll in a sex-offender treatment program. Hastert also admitted to, and apologized for, being a child rapist.

During the trial, Hastert admitted that he “mistreated” and “took advantage” of former students who came forward to say they were molested — three of them anonymously.

“What I did was wrong and I regret it,” he said at the time.

Disgustingly enough, this child rapist became speaker of the house after he’d raped these boys. Given the admitted and exposed widespread pedophilia among those in power, it is entirely possible, and indeed likely, that Hastert continued his disgusting abuse while serving as the house speaker.

Hastert only admitted to the abuse after a federal investigation. At first, the serial child molester denied the accusations and claimed to be a victim of extortion. However, an investigation later revealed the truth.

In spite of admitting to his crimes, Hastert is still victimizing Individual A by demanding he pay back the hush money.

According to NBC, not only does Hastert want his money back, he thinks Individual A should pay his attorney’s fees.

Unfortunately, pedophilia, as the Free Thought Project has exposed, is all too common among those in power. Sadly, however, those who attempt to draw attention to this problem, are labeled as conspiracy nuts or perpetrators of fake news.

As CBS anchor, Ben Swann pointed out, the information gleaned during Pizzagate, while some was outlandish, other facets deserved investigation. However, it was quickly marked as fake news and written off.

Interestingly, the “Pizzagate” investigation in many ways mirrors the high-profile pedophilia scandal that gripped the U.K., before being unceremoniously swept under the rug. In that case, historical abuse by politically connected elites, celebrities, and politicians was brought to light — with an official inquiry being started — only to have the inquiry “crumble” after heavy pressure was exerted by highly placed power brokers within the U.K. establishment.

This was almost the exact same scenario as what took place in the United States in what became known as the Franklin child sex ring coverup. Once the FBI took over the investigation from state authorities, it turned into a witch hunt to persecute the child victims – going so far as to charge them with perjury in a successful attempt to scare the other 70+ victims to recant their testimony regarding the child sex ring.

While the story received a measure of newspaper coverage, there was a complete blackout of the scandal by the mass media, thus most Americans have never heard about this scandal that reached all the way to the White House.

Apparently, as Hastert’s case illustrates, pedophilia is so widespread that politicians now have no problem publicly demanding their victims pay back hush money. But do not fret folks, the Washington Post assures you that this sort of thing does not happen.