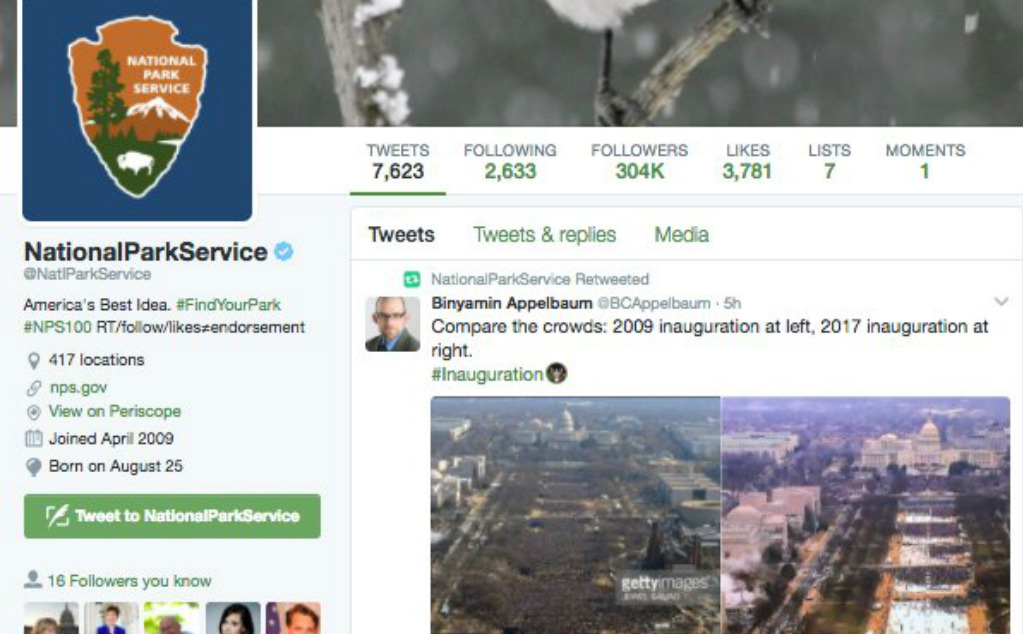 (INTELLIHUB) — The U.S. Department of the Interior’s National Park Service purposefully raised hell on its official government Twitter account Friday during the Inauguration Ceremony when the NPS retweeted a tweet belittling the newly elected President.

Despite the fact that the picture on the right depicting the 2017 Inauguration was taken early on, unfairly showing a light crowd, some people on Twitter took it as fact, which essentially started a shitstorm on Twitter, prompting a temporary shutdown of the NPS Twitter account after the agency issued an RT of Appelbaum’s tweet.

Of course, the guy who started all the havoc in the first place by tweeting out the original propaganda, which was later retweeted by the NPS, couldn’t resist a follow-up tweet alerting the Trump Admin of the problem he had inadvertently spawned.

However, the National Park Service reactivated the account Saturday to issue an official apology.

“We regret the mistaken RTs from our account yesterday and look forward to continuing to share the beauty and history of our parks with you,” tweeted the National Park Service. The Tweet was posted along with a beautiful picture of a buffalo walking down a snow-covered road.

We regret the mistaken RTs from our account yesterday and look forward to continuing to share the beauty and history of our parks with you pic.twitter.com/mctNNvlrmv

After the NPS’ Twitter account came back online Appelbaum again couldn’t resist another tweet stating, “Welcome back @natlparkservice. Hopefully the results of me retweeting you are different than the results of you retweeting me.”

Sadly, this is another clear example of how far these mainline media attention whores will go to in an attempt to remain relevant.