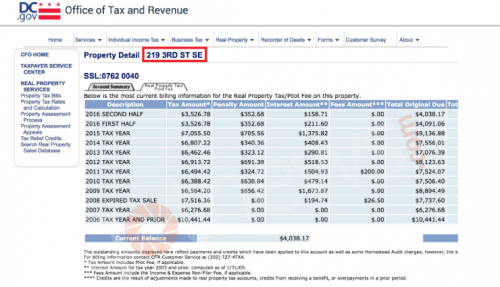 “I don’t see this president-elect as a legitimate president. I think the Russians participated in helping this man get elected. And they helped destroy the candidacy of Hillary Clinton.”

Lewis managed to avoid noting that none other than the now former Director of National Intelligence James Clapper has stated there’s no evidence that Russian hackers had changed vote tallies or interfered with voting systems in the 2016 presidential election.

It turns out that it is John Lewis who has dubious legitimacy.

GotNews reports, Jan. 18, 2017, that Lewis “didn’t pay property taxes on his nearly $1 million fancy Washington, D.C. townhouse on Capitol Hill, despite being in Congress for decades, where the salary for a Representative starts at $174,000 per year.”

Public records show Lewis consistently failed to pay in full his property taxes on his DC townhouse at 219 3rd Street SE on Capitol Hill, since 2008:

In 2010, legal action was threatened against Lewis for his failure to pay property taxes, as documents exclusively obtained by GotNews show.

Lewis’ fancy townhouse at 219 3rd Street SE right next to Capitol Hill was worth more than $810,000 in 2012 according to Nexis assessment records.

Lewis was among the Democrat legislators who boycotted Trump’s inauguration.