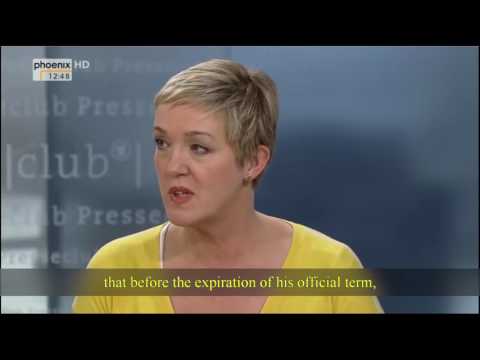 Newspaper publisher Josef Joffe came up with a not so novel idea to remove Donald Trump from office; have someone in the White House murder him.

After a caller to the show asked the panel if there was “still a way out of the Trump catastrophe” to remove him from office, one female panelist began discussing how she thought Trump might be impeached before his first term was up.

“There has to be a qualified two-thirds majority of the Senate in order for a removal of office to take place. These are politically and legally pretty high hurdles, a lot would have to happen for it, we’re far away from that,” she said.

Joffe then calmly responded; “Murder in the White House, for example.”

The host of the show appeared to be on edge and eager to move on quickly.

Joffe is the publisher-editor of Die Zeit, a weekly German newspaper. He is also a courtesy professor of political science at Stanford University.

As we have covered on innumerable occasions before, the same leftists who would have been outraged at anyone hinting at violence against Barack Obama routinely make jokes about assassinating Trump.

The mainstream media’s entire narrative since the moment from when Trump secured the Republican nomination was to legitimize violence at his rallies and then blame Trump and his supporters for the unrest.

Even up to the day before Trump’s inauguration, CNN was still speculating as to what would happen if he was killed.

As Victor Laszlo points out, German comedian Jan Böhmermann faces five years in prison for joking about Turkish tyrant Recep Erdogan under a law that criminalizes insults against a foreign head of state.

Will the individual who joked about Trump’s assassination face anything like the same treatment? Don’t hold your breath.