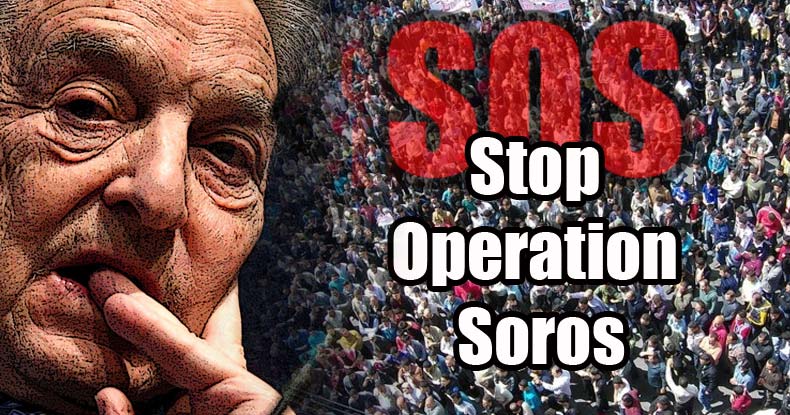 Macedonia – Only a week after Hungary announced plans to purge all NGO groups funded by globalist progressive mega-donor George Soros, a new global initiative – Stop Operation Soros (SOS) – dedicated to the countering the influential political/social engineering the billionaire activist is now engaged in across the globe through his Open Society Foundations, was announced in Macedonia.

During a press conference last week, SOS founders called on all “free-minded citizens,” regardless of race, ethnicity or religion, to “fight against one-mindedness in the civil sector, which is devised and led by George Soros,” the Vecer newspaper reported.

This move comes on the heels of the Hungarian government announcing that it will use “all the tools at its disposal” to target and “sweep out” all non-governmental organizations funded by Soros, a Hungarian-born financier who has become one of the U.S. Democratic Party’s major sources of funding, according to Hungarian Prime Minister Viktor Orban’s ruling party.

Co-founder of the movement, Nikola Srbov, called out Soros for hijacking civil society, in an effort force his own personal ideology upon others by monopolizing civil discourse through strategically funding certain organizations via his group Open Society Foundations.

At the press conference, the group announced that their first step would be to work at uncovering ‘subversive’ activities by Soros-funded NGOs.

“We’ve witnessed the takeover of the entire civil sector and its abuse and instrumentalization to meet the goals of one political party. That is unacceptable and goes beyond the principles of civic organizing,” Srbov said at the press conference.

“The Open Society Foundation, operating under the Soros umbrella, used its funding and personnel to support violent processes in Macedonia. It has monopolized the civil society sector, pushing outside any organization which disagrees with the Soros ideology,” he stated.

Co-founder, Cvetin Cilimanov, editor-in-chief of the state-run MIA news agency, noted that Soros worked to undermine Macedonian sovereignty by colluding with the opposition center-left SDSM party and outside globalist interests. By cooperating with foreign embassies and organizations such as USAID, Cilimanov believes Soros-backed groups have interfered in the political process of Macedonia.

“This is unacceptable and has largely contributed to a feeling in the public that the traditional relations of partnership Macedonia enjoyed with some countries are being undermined,” Cilimanov told journalists.

These complaints are par for the course with the Soros’ Open Society Foundations, as Russia has banned a progressive charity founded by globalist hedge fund billionaire George Soros in 2015 – noting that the organization posed a threat to both state security and the Russian constitution.

In a statement, Russia’s General Prosecutor’s Office said two branches of Soros’ charity network — the Open Society Foundations (OSF) and the Open Society Institute (OSI) — would be placed on a “stop list” of foreign non-governmental organizations whose activities have been deemed “undesirable” by the Russian state.

The Open Society Foundation (OSF) was created by the Hungarian-born billionaire with the stated aim of helping former Eastern bloc countries transition from communism. However, instead, it operates as a lever in the domestic politics of states by funding subversive political activities. For example, Soros publicly supported the violent overthrow of the legitimately-elected government in Ukraine during the ‘Euromaidan’ revolution.

The document details in an extensive bullet point list, “what must be done” to destabilize Russia, focusing on many recurrent neo-liberal themes that Soros uses to infect host nations and overturn governments.

Essentially, Soros works to install his political will on states, under the guise of promoting a free and open society. In reality, he looks to capitalize on the installation of puppet governments that are largely beholden to him and his OSF in an attempt to increase his massive fortune and create a globalist system of governance that supersedes national sovereignty.